Mercedes-Benz is hard at work for a minor update on the GLS luxury SUV, three years after its launch. The Mercedes GLS facelift is going to be launched at the end of this year and the sales will begin in 2023.

It is called the S-Class of SUVs and represents the top of the Mercedes SUV range, with AMG and Maybach versions also present in the lineup.

Mercedes is preparing a small facelift on the GLS for the end of this year. From the first spy shots that have been showing up online, you can see that the car wears a discrete camouflage around the front bumper and the taillights. Therefore, we can expect a newly redesigned bumper on the front end and a slight revision of the radiator grille. At the rear, the taillights will come with a modified layout.

Inside, the Mercedes GLS facelift is going to carry over the new steering wheel that launched with the S-Class last year. Meanwhile, the instrument panel graphics will be going through an update as well. The Mercedes GLS will retain the 12.3-inch multimedia screen and will not feature the new portrait screen from the S-Class, but the menus and functions of the MBUX system will be improved. 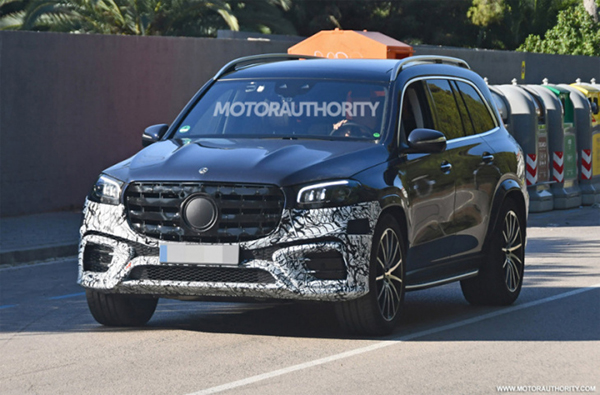 The engine range will continue to consist of inline 6-cylinder diesel and V8 petrol engines. The V8 petrol power mill will operate under the hood of the GLS 580 4Matic, AMG GLS 63 4Matic and that of the Maybach versions.

Since the Mercedes GLE and the new Mercedes GLC have new PHEV versions with larger batteries and an electric range of around 100 km, we expect the Mercedes GLS facelift to receive a PHEV version as well. It will most likely sport a battery capacity similar to that of the GLE, meaning 31.2 kWh.