It’s the dream of most of us: taking our favorite Mercedes over to Germany to let it all go on the Autobahn. The high-speed paradise includes several sections where the limit is what you can handle. Even the least likely Benzes can wring out all of their horsepower on those long stretches, including the GLS 580.

Recently, AutoTopNL took their GLS 580 to the Autobahn determine how fast the seven-passenger SUV can actually go. All they needed was an unlimited section, and the right equipment to record it all.

Outside a given unlimited section of the Autobahn, our mystery driver walks over to the GLS 580. As the infographic states, the 4.0-liter twin-turbo V8 makes 489 horses and 516 lb-ft of torque. All of that goes to the 4MATIC all-wheel drive system via a nine-speed auto, hitting 62 mph in 5.3 seconds. The top speed is 155 mph, quite a lot for the big luxury SUV. It’s certainly a dream to do this on our highways. Let’s see what the driver can do on home territory, though. 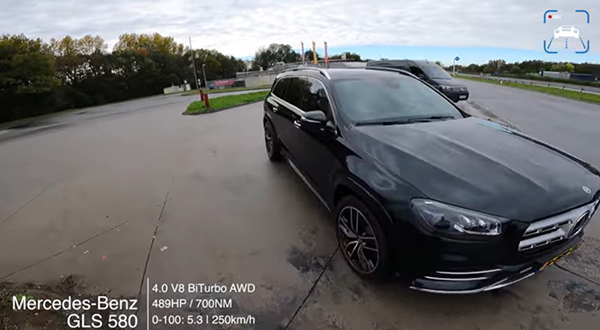 Once off the merge lane, the GLS 580 is off and running. The throaty V8 sounds amazing as the driver never lifts off the accelerator. With each shift of the auto, the revs rise and fall with every passing mile. In just a few seconds, the big SUV’s already at 124 mph, just few mph away from the top. Can the driver reach the summit before having to slow down due to traffic?

Sure enough, upon passing a truck on the left, the driver hits the top speed, and then some. Instead of 155 mph, the GLS 580 maxes out at 159 mph. Drafting the big rig likely helped get those extra mph on the speedometer. Yet, there was more still on tap.

On the next run, the GLS 580 blasted past its published top speed, rocketing down the Autobahn at 162 mph. This is one big SUV that can hustle like a running back. And that’s before stepping up to the AMG GLS 63, a Saturn V of a machine. Good to know you can burn it down the highway when the mood is right.