Trying to plan a bachelor party is one thing, but trying to find a vehicle that will comfortably chauffeur people from the Denver Airport to Colorado Springs with luggage in tow is a whole different mission unto itself. Thankfully, the 2022 Mercedes-Benz GLS 450 was (mostly) up for the task.

With room for six passengers and just enough luggage space behind the third row (with some squeezing), I loaded up the GLS 450 with six of my friends and hit the highway. Starting with an hour-long jaunt from the airport and followed by a long weekend of trekking about the Rocky Mountains, the GLS proved that it’s still an exceptional highway cruiser with some of the best active safety on the market. 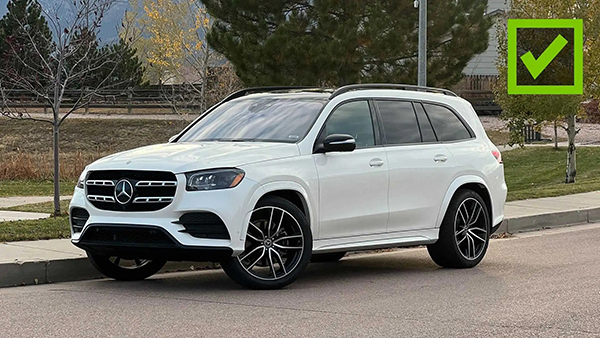 Made For Highway Cruising
Few vehicles south of six figures cruise as smoothly as the GLS. In the initial 60-mile jaunt between Denver Airport and Colorado Springs (and back), the GLS was an excellent highway companion. The leather buckets were supremely comfy for myself and my front passenger, the suspension was soft and spongy, and the sound deadening was next-level good.

High-End Active Safety
Another positive tick toward the GLS’ cruising abilities is its standard suite of active safety equipment. Adaptive cruise control paired with lane-centering technology made the hour-long highway drive – even in slushy conditions – an absolute breeze. The GLS applied throttle and braking inputs smoothly as needed and didn’t ping-pong aggressively in the lane.

Still Looks Great
Mercedes is taking its range of EQ SUVs in a… different design direction. But the GLS and the smaller GLE are still two of the best-looking luxury SUVs on the market, full stop. Sure, there are better paint options available than the Diamond White on this tester – I’m partial to Cardinal Red – but the optional 23-inch AMG wheels are stylish, the body lines are clean and not too boxy, and the overall look is elegant without feeling over-the-top. 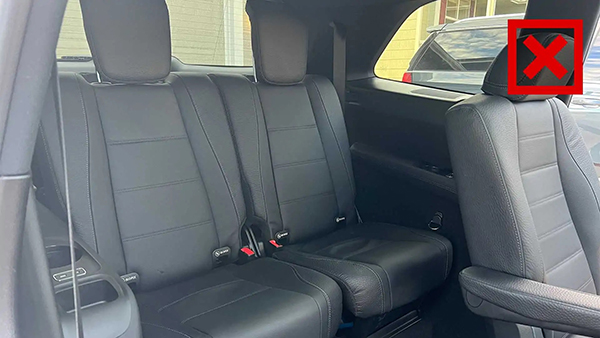 Not The Roomiest
Compared to something like the BMW X7 or the nearest Range Rover, the GLS actually has pretty good figures on paper. The 17.4 cubic feet of room behind the second row are among best in class, and even the 38.9 inches of headroom and 34.6 inches of legroom in the third row are decent. Still, my biggest task was trying to shove seven dudes and their luggage into a vehicle that would seemingly prefer one or the other, not both.

If you’re looking for a three-row made for road trips with six other adults, you still might need to go bigger. The GLS prefers smaller people and less luggage than something like an extended Cadillac Escalade or a Lincoln Navigator – bigger body-on-frame three-rows. Both of those options are still superior to the unibody crossovers in this respect with better cargo and passenger space all around.

Sluggish When Loaded
I never felt that the GLS 450 was underpowered when I drove it back in 2019. The twin-turbocharged 3.0-liter inline-six engine, with 362 horsepower and 369 pound-feet of torque, typically offers more than enough power for everyday driving situations. But an outlier could be loading up seven people with luggage and heading into higher altitudes.

With passengers and cargo, the GLS 450 did struggle a bit; some whining and wheezing from the six-cylinder forced me to bury my foot just a bit deeper into the accelerator pedal than usual. If you do typically commute at these elevations with passengers in tow, maybe consider the 483-horsepower GLS 580 model.

Not The Most Efficient
Earning just 18 miles per gallon city, 24 highway, and 20 combined at its most efficient, the GLS isn’t the fuel-sipper of the group. By comparison, the X7 and Audi Q7 both offer two better mpg combined, and even the larger Escalade offers 23 mpg combined if you go for the diesel.