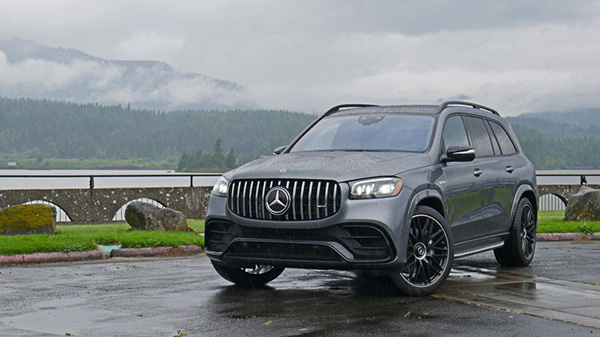 Although it’s an AMG model with proper AMG componentry used throughout, this enormous land-bound jet is spiritually descended from the elder branches of the Affalterbach family tree that sprouted the V12-powered S65 and CL65 models of old, rather than those that could legitimately tackle a track. Your expectation should be sports car acceleration, theatrical noise and dynamics thoroughly sharpened from the versions that have a 0 at the end of their numerical names.

Like those old-school AMGs, the GLS 63 and its twin-turbo V8 deeply rumble like distant thunder as you slowly move away from a stop. It’s an immediate indication you’re driving something different, something special, and that there’s an absurdly powerful engine lurking under hood. Unleashed, the 603 horsepower and 627 pound-feet of torque, enhanced by an additional 21 hp and 184 lb-ft from the EQ Boost mild-hybrid system, are fed to the rear-biased AMG Performance 4Matic+ all-wheel-drive system that engages the front wheels when traction demands it. That includes a 0-60 launch where roughly 5,700 pounds worth of three-row family crossover are thrust forth in less than 4 seconds and you’re washed into your heated, ventilated and massaging seat in a way that only underlines the private jet analogy. 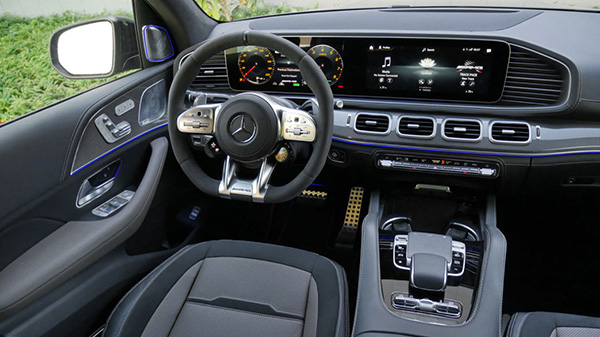 In Sport or Sport+, the exhaust note is a pleasingly deep baritone that emits a unique puuhhhffft with each upshift, like enormous marshmallows are being caught in the line of fire. In reality, it’s the result of the exhaust’s bark being filtered through a dreadnaught of sound-deadening, leather, foam and everything else between its tips and your ears. 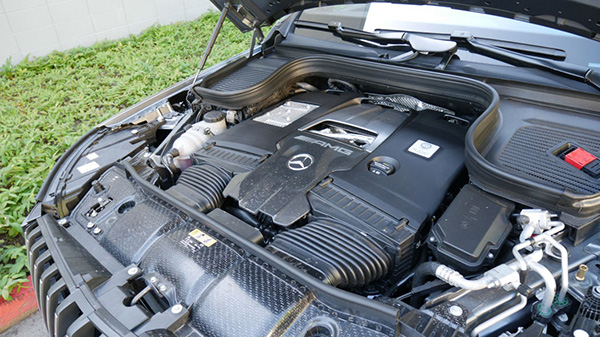 The nine-speed AMG transmission that engages those shifts is one sign the GLS 63 has less aggressive sporting intentions. Usually in Sport+, an AMG transmission will intuitively downshift when braking into a corner, effectively hitting the “-” paddle just when you would in preparation for powering out of the bend. The GLS does not do this, or at least it didn’t at the speeds with to which I was subjecting it on the local mountain road. They certainly weren’t slow, as I managed to coax well past the usual seat-of-the-pants warning triggered by a calculation that’s roughly mph + vehicle size ÷ road width and twistiness. 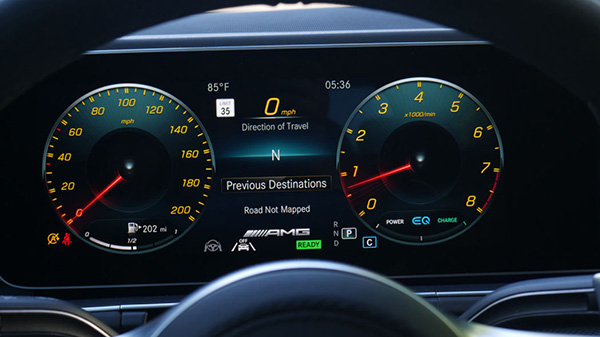 Indeed, the GLS 63 is capable of going far faster than you’re probably comfortable going. Unlike other go-fast SUVs, you never forget how long (17 feet), how wide (7 feet), how tall (5-foot-8) and heavy (nearly 3 tons) it is. It’s a matter of perception and of physics. That said, the adaptive air suspension and active ride stabilization still do an otherworldly job of defying those physics by keeping the giant GLS flat through corners. Long sweepers are its forte, much as they were in those old S65 and CL65 models with hydraulic Active Body Control (hopefully the modern Active Ride Control, powered by the 48-volt electric system, proves to be more reliable). 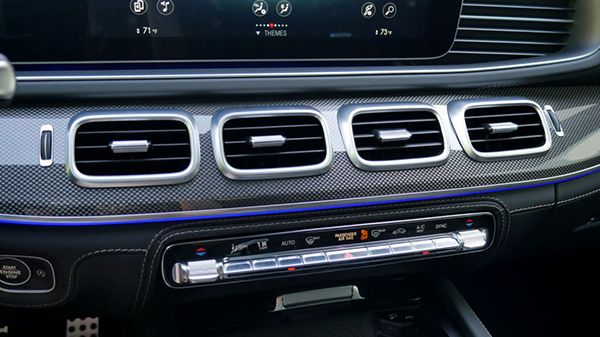 The ride those air springs contribute to is firm yet complaint-free on smooth pavement, but on the less pristine Interstate 84 east of Portland, it erred far too deeply into sport sedan territory with excessive vibration and mild impact harshness. The optional 23-inch forged wheels likely deserve the blame, and represent an options box best left unchecked (you’ll save $4,950, by the way). The standard 21s are sufficiently enormous, yet will also still be wrapped in aggressive performance rubber that results in an even more disagreeable outcome: noise. It’s loud and booming inside, which is shocking for a big, pricey Mercedes with acres of sound deadening and a $1,100 Acoustic Comfort package that slathers on even more. It does wonders for keeping wind noise out, but is rendered moot by the sticky Michelins. Less aggressive tires would certainly diminish that otherworldly corner-taking ability, but let’s be realistic here. Being able to better hear the engine, the $4,500 Burmester sound system and your kids in the back would be well worth the trade-off. 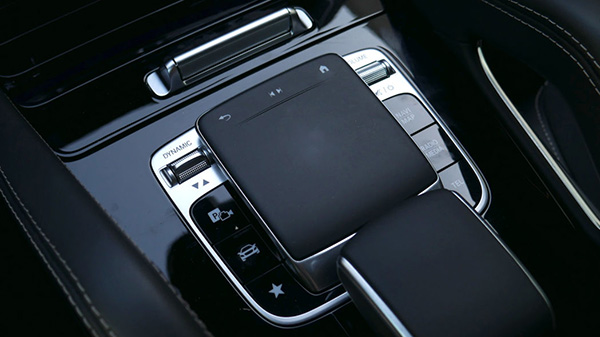 Really, these issues of comfort and noise make it hard not to consider whether the GLS 580 is the better choice. It may lack those sharpened AMG edges and a handbuilt 603-hp leviathan, but 483 hp, 516 lb-ft and a 5.2-second 0-60 time are enough to make you giggle. It still has adaptive air springs and the option of Active Ride Control, and even if they aren’t as aggressively tuned, that could easily be deemed a good thing. You’d also be saving $33,000 off the bat, which admittedly isn’t as big a deal at this stratospheric price point, but dollars are still dollars. 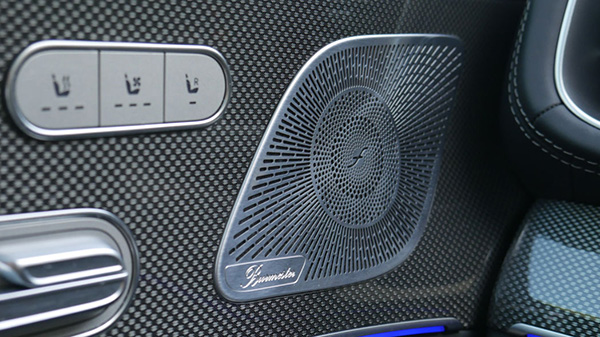 You also have access to the same palace-worth of creature comforts, which is ultimately where any GLS, regardless of model, shines. Both the 580 and 63 share the heated, ventilated and massaging multi-contour front seats, plus the option of extending those pleasantries to the second row. Doing so further adds a “luxury center armrest” to the standard bench that’s packed with a 7-inch tablet linked to the MBUX infotainment system, wireless smartphone charging and two USB-C ports. In fact, there are nine standard USB-Cs spread throughout the cabin, including multiple ones in the spacious third row. Those in the second will have to motor their own seats forward a bit, but average-sized adults can actually fit quite comfortably in the way back. And as we discovered in the GLS luggage test, four bags come along for the ride when all seats are in place. 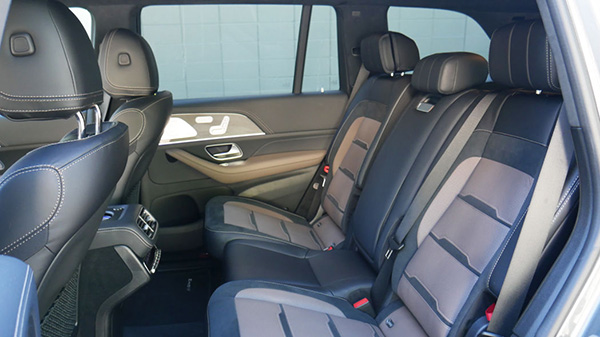 Up front, the GLS is dominating by twin 12.3-inch screens that are configurable, beautiful and quite overwhelming. MBUX is capable of controlling and configuring a staggering number of features and attributes, but it also results in a car you can hardly just jump in and go. Even once you know where certain functions are located within the deep menu structure, it often requires more steps to reach them than is ideal. 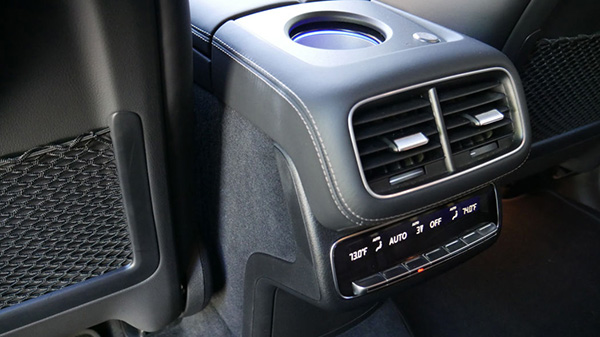 The materials and attention to detail are, as expected, exquisite. To the usual swaths of leather and metal trim accented by soft, 64-color ambient lighting, our GLS 63 test car featured the $440 metal weave trim option that’s classier than carbon fiber, yet less showy than wood. By contrast, the $600 Dinamica faux suede steering wheel can join those 23-inch wheels and the $1,500 carbon fiber engine cover on the unchecked options list labeled “Who are you kidding?” 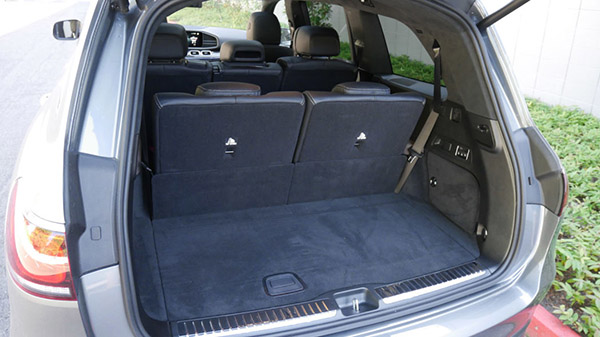 In a way, though, that question can largely be asked about the entire AMG GLS 63. Packing this much power and physic-defying engineering wizardry into a palatial family hauler is fundamentally ridiculous (not to mention paying an as-tested $153,035 for one). And that’s with the full acknowledgement that the GLS 580, or hell, the GLS 450 go miles beyond the practical expectations satisfied by the Honda Pilots and Kia Tellurides of the world. The Mercedes-AMG version is certainly more than its Mercedes-Benz siblings – more speed, more character, more indulgent – but that doesn’t necessarily make it better.