When Mercedes-Benz renamed its crossover line a few years back, the theory was that it better aligned these high-riders with the automaker’s traditional cars. The GLK morphed into the GLC, the ML became the GLE, and the GL added the S-Class’ S (short for “special”) to its name. With these changes in mind, it’s reasonable to assume there’s some relationship in terms of quality and poshness between the crossovers and their car-based siblings. 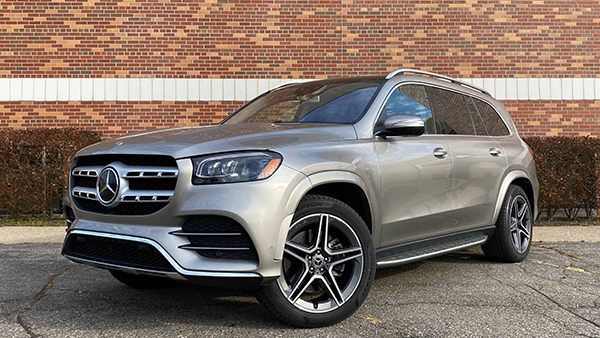 But in the case of the Mercedes-Benz GLS-Class, it never really felt like an equal to the legendary S-Class. Mercedes’ flagship car was an immaculate, hewn-from-granite thing with the best materials and the best technology. The GLS felt shoddy, though, with none of the S-Class’ polish or poise in its driving character.

That’s changed for the 2020 GLS-Class, a redesigned three-row that finally feels like a high-riding counterpart to Mercedes’ flagship sedan in the way it drives, the way the cabin feels, and in the degree of tech on offer. 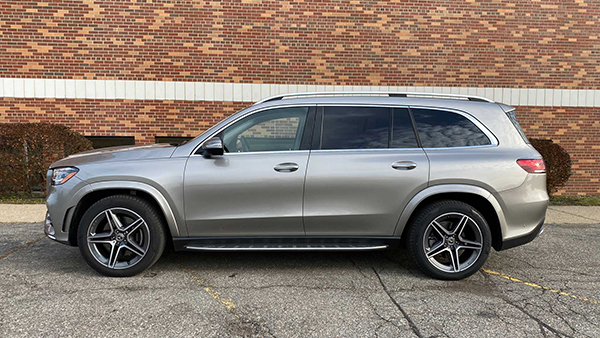 Man, the GLS is massive. But despite its sheer girth – 17.1 feet long with over 10 feet between the axles – Mercedes’ designers have crafted a cohesive, stylish design that was absent in the last-generation GLS. The lines are clean and crisp, but it’s not overstyled. It’s refined, but Mercedes doesn’t try to hide the GLS’ size.

The wide, gaping grille and somewhat derpy headlights emphasize the SUV’s bigness, although the slim taillights look out of place in relation. Still, this is a broadly attractive vehicle, especially in our tester’s Mojave Silver paint. We’re also thankful for the standard 21-inch wheels, rather than the available 23s. Sure, the bigger alloys look flashy, but the ride isn’t as plush. And anyway, there’s nothing wrong with the 21-inch setup – these wheels are big enough that it isn’t outwardly obvious that they’re the standardalloy.

In the cabin, the GLS adopts Mercedes’ current design philosophy: a great honking slab atop in the dashboard that houses twin 12.3-inch displays for the infotainment and gauge cluster. The GLS has some distinct touches that separate it from Mercedes’ cars, though. HVAC outlets flank the display, while four rectangular vents sit below the infotainment portion of the slab. Big, chonky handles on the center console are natural rest points and serve as a reminder that the GLS actually has some off-road talent. Brown leather and real wood and metal accents are the primary material highlights; each is, of course, perfectly executed. This is a gorgeous interior. 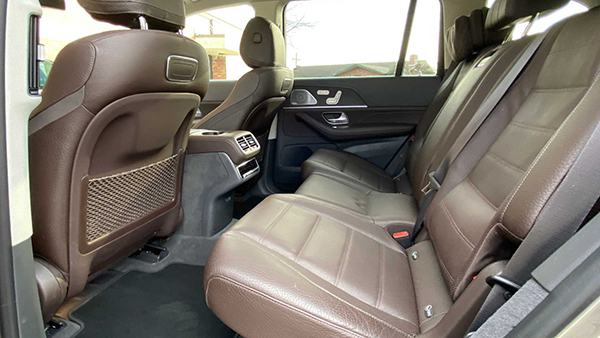 It’s a three-row Mercedes-Benz SUV. Was there ever any doubt it’d earn perfect marks here? There really isn’t a bad place in this cabin. The front chairs are monumentally comfortable, with ample support and a huge range of adjustability. There’s three-stage heating and ventilation, heated armrests, and a massage function for the seats. Sightlines are excellent in every direction, too. The GLS’ driver’s seat is a fantastic place to spend a day.

The middle row is even better. A total of 41.9 inches of legroom (almost two inches more than you get in a Mercedes-Maybach S-Class) make for ample sprawling space. This rear bench isn’t as comfortable as the front chairs, although opting for the no-cost captain’s chairs would make the difference between front and back negligible – heating, ventilation, and massagers are optional here too. Even the third row is tolerable for adults during short stints. The 34.6 inches of leg space is behind the hulking Lincoln Navigator, but only by 1.5 inches – thank the GLS’ slightly longer wheelbase, which makes up for the big American being about five inches longer overall.

With the standard 21-inch wheels, the GLS is whisper quiet on the road. There’s little tire or road noise – the only sounds that enter the cabin are from the delicious V8 under the hood. The ride is as smooth as it is quiet thanks to the standard air suspension,which renders road imperfections irrelevant. There are cars with better rides, but they typically cost several times the GLS’ $100,000 starting price.

Luggage volume is immense, too, although the GLS does struggle with cargo when all three seats are in place. There’s at least 17.4 cubic feet of space with the power-operated rear seats up, but that swells to 42.7 with the third-row down and 84.7 cubes with the second and third rows flat. Looking back at the Navigator, what starts as slightly more space quickly grows to significantly more (19.3/57.5/103.3 cubic feet). The Navigator also offers a long-wheelbase model, which annihilates the GLS on the cargo front. As for one of its German rivals, the GLS trades blows with the new kid on the block, the BMW X7 – the Merc has a higher minimum, but lower maximums (12.8 / 48.6 / 90.4 cubic feet).

Have you read any of our reviews of recent Mercedes-Benz products? If so, then you know what we’re going to say about this tech suite, because the GLS shares it with every other new Mercedes. Twin 12.3-inch displays on the dash house the newest MBUX infotainment system and it’s mostly excellent.

While MBUX gets points for its responsiveness and crisp graphics, one of our favorite aspects is the many options the driver has to interact with it. The center display is a touchscreen, but then there’s also a touchpad on the center console and two small thumb pads on the steering wheel. There’s even a voice assistant, although we’d rather clip our vocal cords than interact with it. It’s a fine party trick, but executing commands by voice is always slower than using the other three forms of input.

The GLS would earn points if it featured the optional Burmester audio system, but our tester had a no-cost Burmester system. There are still 13 speakers and 590 watts of power, but it feels distinctly average for the class, especially when you consider the optional audio packages in the GLS and most of its rivals have at least twice as many speakers – the extra-cost system here packs 26 speakers and over 1,600 watts.

Lack of ear-drum-shattering audio aside, there’s a lot of other neat stuff here. Our GLS has a fragrance pack that gives the interior a squirt of perfume on start-up. There are heated armrests in front, too, and an expansive head-up display. This is all optional gear, but it makes the GLS feel special. 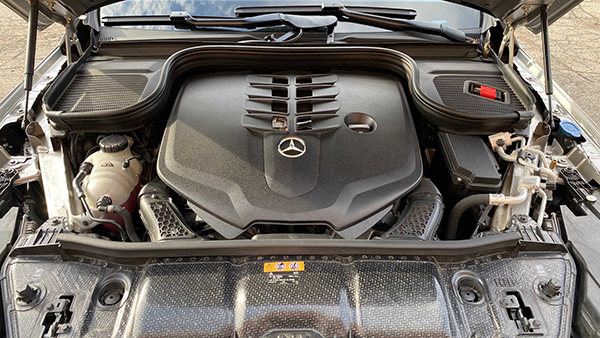 The GLS 580 sits in the middle of the broader GLS hierarchy. At the bottom, there’s the GLS 450 with its turbocharged 3.0-liter straight-six model and innovative EQ Boost mild-hybrid system. At the top, there’s the GLS 63, a monstrous SUV that takes a twin-turbocharged 4.0-liter V8 and matches it with the aforementioned mild-hybrid system. As for the GLS 580, it also has the V8 engine, integrated starter-generator, and 48-volt electrical architecture similar to what you’d find on the 63, but with a bit less than the 603 hp of the AMG-badged model.

That’s just fine, though, because there’s still 483 horsepower and 516 pound-feet of torque, figures that hurl this 5,700-pound SUV to 60 miles per hour in just 5.2 seconds. It’s a strong engine, with impressive low-end torque and a silky character from one end of the tach to the other. In fact, the 580’s engine is so good we’d argue it’s the sweet spot in the GLS lineup – no one needs the GLS 63 (as we’ve covered), but the 450’s 5.9-second sprint to 60 might be a bit too leisurely for the wealthy consumers Mercedes targets.

Regardless of which engine you choose, the GLS features a smart nine-speed automatic. It’s quick and seamless in everyday operation, responding willingly to throttle inputs and engaging readily off the line.

Despite its mass, the GLS is also an impressive handler. Our tester features one of the must-have options on any Mercedes product that offers it: E-Active Body Control. Running off the 48-volt architecture, E-ABC constantly adjusts the suspension at each corner, independently, to eradicate road imperfections. At the same time, it virtually eliminates body roll via a Curve driving mode, which counteracts body motions by subtly leaning the GLS into corners for sharper, more precise cornering. It’s not cheap, at $6,500, but as equipped, this is one of the most agile vehicles in the class. Now, if only agility mattered to three-row luxury SUV buyers. 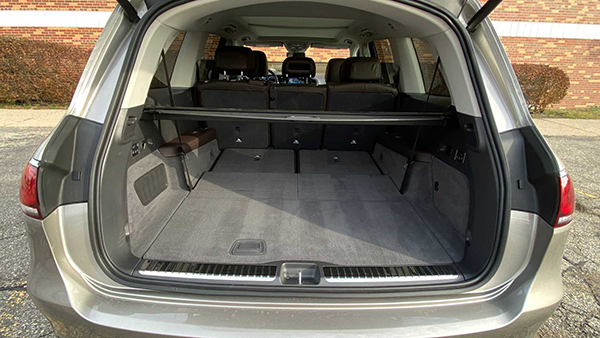 The GLS 580 starts well equipped on the safety front, and then becomes one of the smartest cars around with the $2,550 Driver Assistance package. The full list of safety gear is as long as your arm, but here’s what you need to know: with all its systems engaged, the GLS turns even the longest highway commutes into a dawdle.

Full-speed adaptive cruise control manages the speed, while a hugely impressive steering assist system keeps the car centered and negotiates gentle bends. If the navigation is active, the GLS’ computers can drop the adaptive cruise speed to a safe level in anticipation of corners. Tip the turn signal, and with ACC engaged, the system will even monitor traffic so it can execute a safe lane change. It’s truly an excellent set of safety technology.

Fuel economy is rarely a priority in 500-horsepower, V8-powered, three-row luxury SUVs, so there’s not much that’s surprising about this score. The GLS 580 returns an EPA estimated 16 miles per gallon city, 21 highway, and 18 combined. Further dinging the score is the GLS’ insistence on 93-octane fuel.

As we said, though, the GLS’ competitors aren’t especially fuel efficient, and would likely earn similar scores. The V8-powered BMW X7 drops a point in combined and city fuel economy relative to the GLS, while the twin-turbocharged V6 in the Lincoln Navigator matches the larger, more powerful V8 in the Mercedes. Ditto the supercharged 5.0-liter V8 in the Range Rover. So keep that in mind: the GLS isn’t inefficient, but the broader class is. 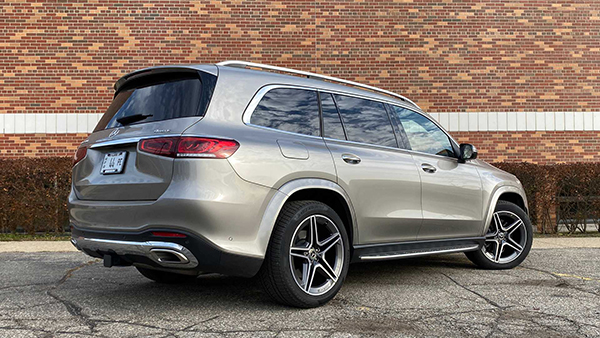 As covered, the $6,500 E-Active Body Control and $2,250 Driver Assistance Package are smart buys. If you’re regularly planning on hauling other adults, you might as well splurge for the $4,400 Executive Rear Seat package (heated/vented/massaging rear seats, a rear wireless charge pad, and “comfort” headrests). And if you live somewhere snowy, go for the $1,050 Warmth and Comfort Package (heated front and rear armrests). The $1,100 head-up display and $1,000 panoramic sunroof are a bit dear for a vehicle that starts at $100k, but by and large, there are few bad options on our GLS.

As for the competition, a V8-powered BMW X7 is cheaper, starting at $92,600, while the most affordable V8-equipped Range Rover demands $105,950. The real bargain is the Lincoln Navigator, though, which is only available with a 450-horsepower, twin-turbo V6, but at a price of just $76,185. You can score a range-topping Navigator Black Label for $1,665 less than the GLS 580’s starting price, even.

Adding options doesn’t much help the GLS compared to its chief competitor. A fully loaded BMW X7 xDrive50i is available for about $115,000, almost $5,000 less than our well-equipped tester.