Mercedes-AMG recently introduced two new crossovers with its bonkers 603-horsepower 4.0-liter twin-turbo V8, built by hand in Affalterbach, Germany, and installed in Tuscaloosa, Ala. We found the smaller of the two, the GLE 63 S, capable but superfluous as a performance vehicle. It would follow, then, that the bigger, bulkier 2021 Mercedes-AMG GLS 63 would be even more, as the kids say, extra. That is not the case. 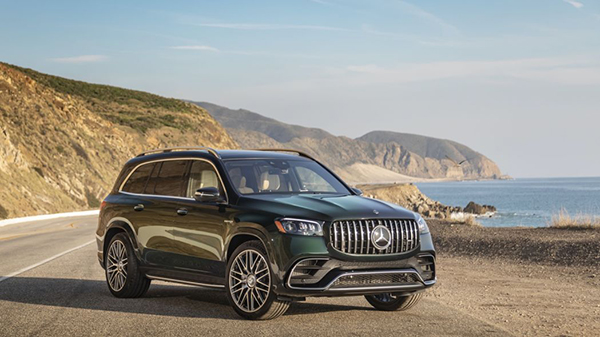 Yes, the GLS 63 is built on the same platform as the GLE 63 S, but it adds a third row and an estimated 450 pounds. Yes, it shares the same 603 horsepower and 627 pound-feet of torque, and that’s before the EQ Boost integrated starter-generator tosses in an additional 21 horses and 184 lb-ft. It uses the same nine-speed automatic transmission, as well as Mercedes’ 4MATIC+ all-wheel-drive system with a locking rear differential that apportions torque from 100 percent rear to a 50:50 ratio and everything in between. 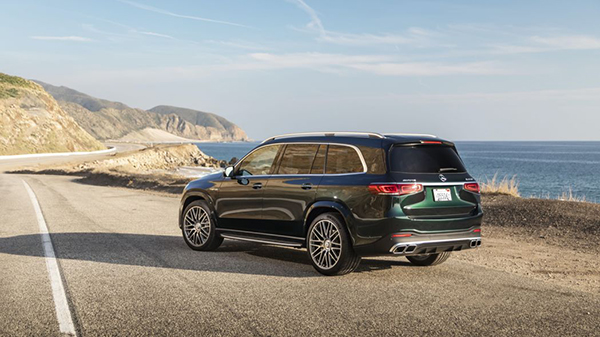 While a five-seater with high-performance aspirations like the GLE would make more sense as a wagon, there’s no denying that the three actually usable seating rows (no, the E-Class wagon’s rear-facers don’t count) makes the GLS 63’s existence slightly more justified. All that extra size and weight at least serves a practical purpose. 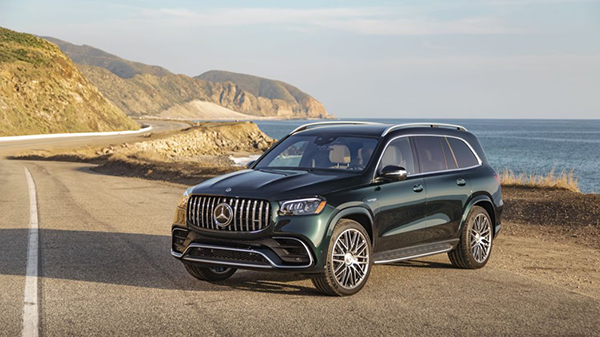 It’s also more reasonable about its performance goals. For instance, the GLS 63 eschews the GLE’s Race mode that recognizes via GPS when it’s on a track and thus time to put away the electronic minders that keep the shiny side up. The GLS forgoes the ludicrous notion that a massive SUV is going to end up on a race track. It knows what it is, and that’s a big, honkin’ seven-seater that, like its name implies, is the crossover equivalent of that gold standard of luxury sedans, the S-Class. 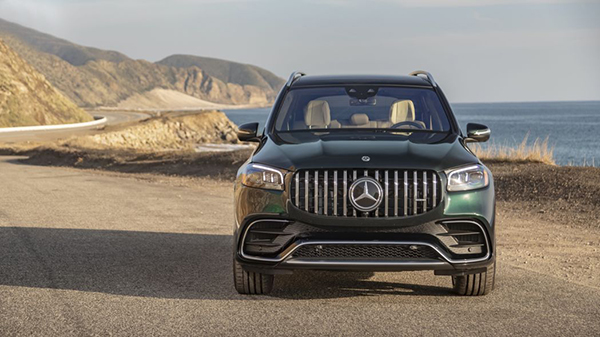 That said, those performance goals may be more reasonable than the GLE’s but they’re still astonishing. Curb weight had yet to be certified at the time of our test drive, but the AMG 63 is bound to be more than the six-cylinder GLS 450 that clocks in at 5,412 pounds. And yet, it shoots up to 60 mph from a standstill in just 4.1 seconds, according to AMG. A decade ago, that would have matched a Ferrari F430 Berlinetta. It’s positively insane for such a large vehicle. 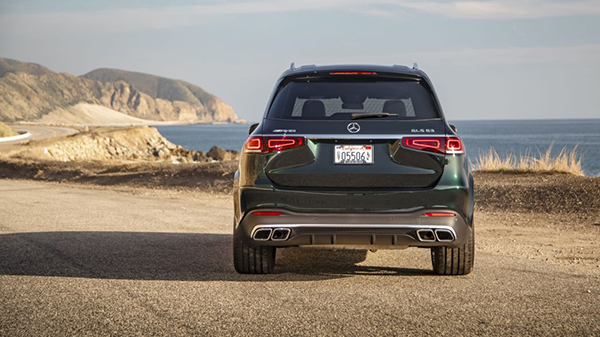 On twisting California mountain roads, the GLS 63’s extra heft prevents the sprightlier corner attacks that the GLE seems to take on with enthusiasm. Driven with the same spiritedness as its smaller sibling, the GLS 63’s brakes — 15.7 x 1.5-inch discs and six-piston calipers in front, 14.6 x 1.3 inch with single-piston calipers out back — start to emit the acrid scent of overcooked pads. However, on wider sweepers and expansive highways – you know, the kind of terrain the GLS 63 is most likely to traverse – its 123.4-inch wheelbase, longer by 5.5 inches, makes it feel more planted.

As with its smaller sibling, there are multiple drive modes. There’s Trail and Sand, which adjust the AWD algorithms for soft or loose terrain and raise the ride height up to 2.16 inches. At the other end of the spectrum, Sport and Sport+ speed up the throttle response, increase suspension stiffness, hold gears longer and, of course, add the compulsory louder exhaust. We weren’t able to test the vehicle off-road, but the on-asphalt drive modes behave as advertised. The accurate but uncommunicative steering doesn’t bother us as much in the GLS as it did in the GLE – again, it’s those different performance goals. The GLS 63 shines best as a long-distance hauler, gobbling up interstate miles like Pac-Man does dots. 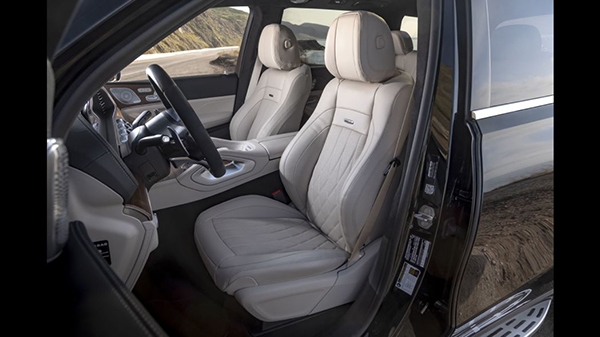 And while it does that, occupants will be treated to extremely comfortable surroundings. The interior is a marked improvement over the previous-generation GLS 63’s, slathered in soft Nappa leather and bits of shiny aluminum in all the right places. A 12.3-inch touchscreen blends into the digital instrument cluster and looks like an integrated part of the dash, rather than a tacked-on iPad. Every button and dial is pleasant to the touch. There are countless ways to activate the car’s abundant features through the MBUX interface – voice, touchpad, touchscreen, steering wheel buttons, or you could use similar features on your own phone via Android Auto or Apple CarPlay. We also dug the augmented road sign overlays that the nav system puts on the front-facing cameras, a helpful but unobtrusive example of technology done right. 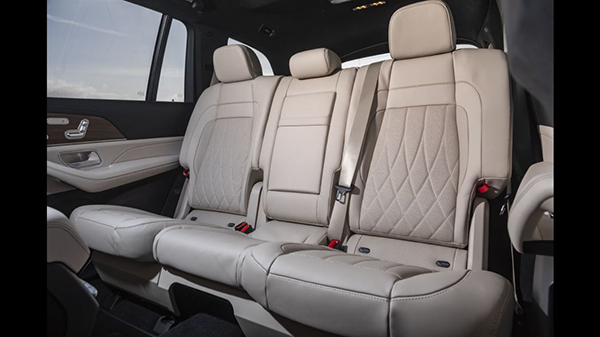 The GLS 63 starts at $132,100, but dig a little deeper in your wallet and you can spring for an $1,100 Warmth and Comfort Package, which heats the armrests, center console, and things that we didn’t even know needed heating, like the door panel centers – and heats them more rapidly that the “regular” warmers. For $3,700, there’s the Executive Rear Seat Package Plus, which adds a 7-inch tablet that interfaces with the on-board MBUX interface, rear wireless charging, both heating and cooling in the rear seats and cupholders, and specially contoured rear seats with built-in massage. Or for a mere $550, opt for the ENERGIZING Package Plus, which uses the climate controls, ambient lighting, massagers, fragrance diffusers, and pre-programmed music to orchestrate 10-minute wellness programs like “Warmth,” “Vitality,” or “Refresh.” You could also splurge on a $1,500 carbon fiber engine cover. It’s as if Mercedes threw in every idea they had, no matter how gratuitous. 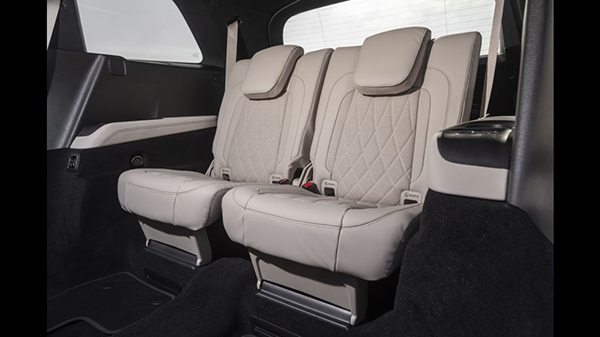 We would probably forgo all those trinkets and save our money for the optional 23-inch wheels, a throwback to the old Monoblock rims that defined AMG’s pre-Mercedes ownership. Offered in silver or matte black (a $4,950 option), they completely transform the look of the GLS 63 into something special. With the standard 21- or 22-inch multispokes, the exterior looks a bit generic-crossover. 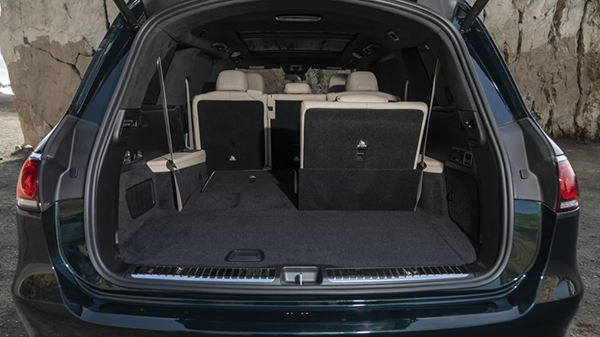 Overall, the GLS 63 is a more balanced vehicle than the GLE 63 S. It’s a supremely comfortable grand tourer, but one that gives you a towering seating position, room for seven, and 600-plus horsepower on tap. Buyers of its smaller sibling have other options such as the Porsche Cayenne Turbo and the BMW X5 M Competition, but there’s really nothing else on the market like the GLS 63.