The Cape Northwester is an incredible thing. Some say it’s the perfect storm. Blasting inland off the chilly Atlantic, it drives the rain almost horizontally, sometimes for days on end. Perfect conditions for us to take delivery of our mad 600 horse Mercedes-AMG GLS 63. 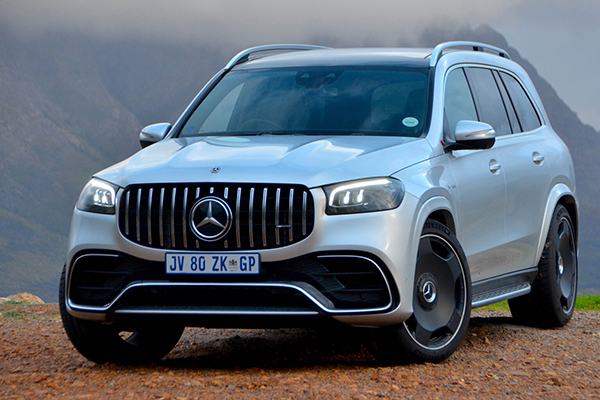 A barnstormer of a machine, this 5,600-pound monster stopped our clocks at 4 seconds to 60 mph. And never mind the sink, it quite literally packs the whole hotel’s kitchen in there! Best of all, it brings the inner garbage boss out of you. Especially if you appreciate a chauffeured ride…

AMG GLS 63 Is a Monster of a Car
So, what about this monster of a car? Well, it’ll do Tony Soprano proud for sure. Imposing is not the word — dramatically enhanced by those optional disc-like matt black 23-inch wheels that add ’40s general’s Benz persona to it. Just in case.

Clamber aboard and you’re in the lap of luxury. Spacious and sensual in AMG Nappa leather style, GLS 63 has AMG-specific ‘Hey Mercedes’ MBUX infotainment and a splendid widescreen cockpit.

Like Lewis Hamilton, you will need to take a little time to figure everything out on this car’s 3-spoke AMG multifunction steering wheel first. With three tiers of buttons on each stalk and rotary dials, you truly are a master of the GLS 63’s destiny behind this wheel. GLS’s widebody instrumentation and infotainment crosses most of the dash and packs extra AMG magic. And don’t forget the heads-up too. 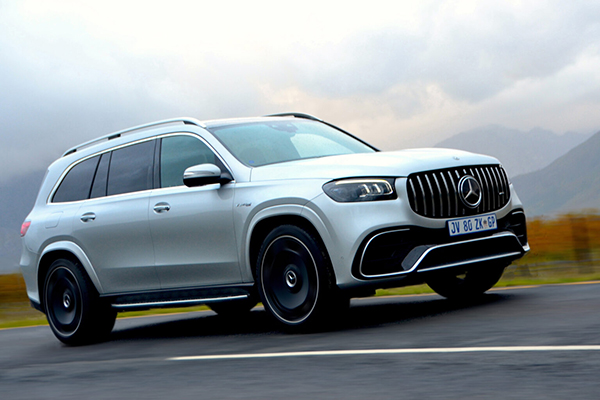 Outstanding Dynamics Don’t Compromise Comfort
Packing AMG Ride Control+ pneumatic self levelling air suspension with a special spring and damper set-up and Adaptive Damping Plus, GLS 63 really does deliver outstanding driving dynamics without really compromising comfort. We recently enjoyed the pleasure of driving ‘baby bro’ GLS 580 a considerable distance, and while that car impressed us in its dynamics and comfort, big brother here takes it to another level.

As I’d done in the 580, I played the garbage boss again and took a second-row ride. Alas to Burger King rather than the strip club! Still, the combined effects of that and the three inches more legroom afforded by the new GLS’ wheelbase stretch, made quite the difference. Those AMG suspension tricks virtually eliminate roll and sway to actually make that 580 feel wallowy and jerky. Especially from the second row.

That’s just first impressions. But does it deliver from behind the wheel? Man, it does! And then some… 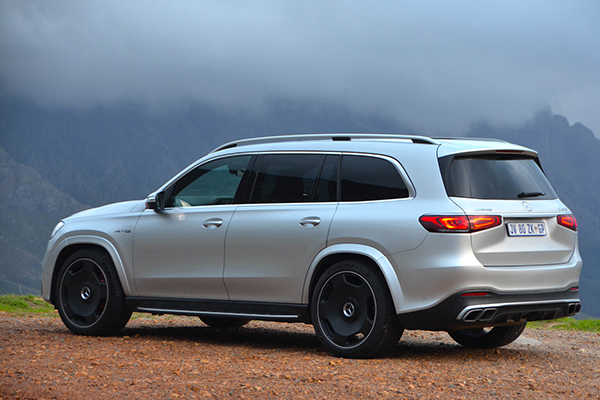 9-speed Auto Also Comes Under that AMG Spell
Like that powerful Northwester, GLS 63 is blasted along by its AMG handcrafted 603 hp 627 lb ft 4-litre biturbo V8 aided and abetted by a 20 hp 180 lb integrated EQ Boost starter-alternator. It packs four-cylinder deactivation to help save fuel, when it purrs like lion. Turning all four wheels through its AMG fiddled 4Matic AWD, its feisty 9-speed automatic also comes under that AMG spell.

A monster in every way, this seven-seater SUV doesn’t just blast to 60 mph in as good as four seconds flat, but it can also run at 175 mph with our specimen’s optional AMG Driver’s package. All while wrapping you in the absolute lap of supreme luxury. You’d better believe it. That’s what this 600 horse Mercedes-AMG GLS 63 4Matic is all about.

It may have taken that second-row ride to emphasize some of it, but this 63 makes huge strides in ride and handling. Active Engine Mounts bring a soft setting for cruising and stiffer one for more dynamic performance. Active Roll Stabilization makes it more dynamic. And an agile continuous ride height control keeps it on an even keel, no matter what the load. 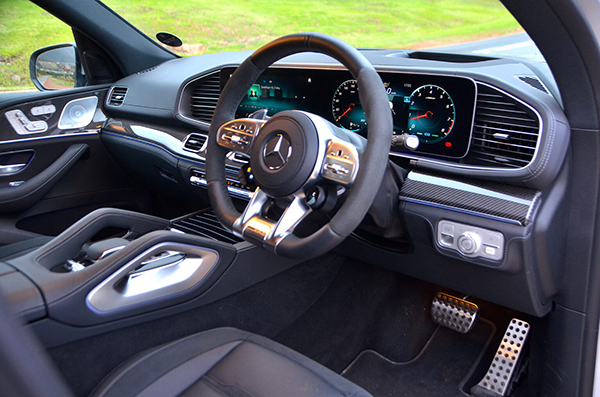 Slithers of Rubber on Gothic Alloys
The GLS 63 has six driving modes including everything from Comfort to Sport Plus and even Trail and Sand. The latter are redundant. Would you take those slithers of rubber and giant Gothic alloys to the rocks? Me neither! GLS 63 also packs a raft of extensive driver assistance gadgets, of which latest spec route-based LiveTraffic Distronic and speed-adjustable Active Distance Assist are actually a hoot to use.

Quite literally monstrous in its acceleration, that lion’s purr becomes a roar of imposing death when teased. Spine chilling. Acceleration is mesmerizing as it stuffs you back in the seat. Can it possibly weigh five and a half tons?

The 9-speed gearbox is ruthless as it savages into the right gear for whatever situation. But always super smooth, whether slipping along in the sunshine traffic jam or attacking the pass in our storm.

Braking is incredible thanks to mammoth 15.7 diameter by 1.5-inch thick internally ventilated and perforated integral front and 14.5 by 1.25″ rear AMG high-performance brakes. So, its ability to slow, is probably even more impressive than its anger to accelerate. In fact, this 600 horse GLS delivers an overall poise way beyond what you’d expect from a vehicle this size. No matter what the surface of the road.

Your first impression will no doubt be that this is a massive car. It is. Yet it’s solid, nimble and finely balanced to drive. So much so that it feels more like a GLC than the GLS it is. That sumptuous cabin makes you feel better than just at home in a plush, well-finished and comfortable space. And all those electronic settings and functions are simple to fathom, even though there’s quite a lot to take in. 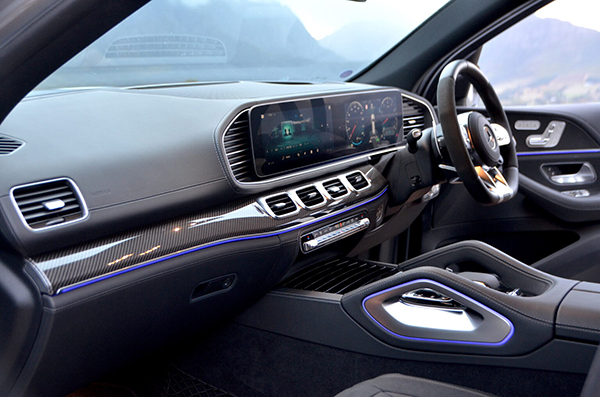 AMG’s 600 horse GLS 63 is an Absolute Tour de Force
It has it all and a hell of a lot more too and of course it’s costly. Starting at $132,100 it devours a gallon of premium for every 16 miles driven on average. Which makes the Mercedes-AMG GLS 63 something of an acquired taste.

But it is also an absolute tour de force, is blindingly fast and it’s an acutely capable all-rounder too. The perfect storm indeed.