Only two months have passed since the unveiling of the second-generation Mercedes-Benz GLC SUV. However, there seems to be no rest for the wicked in the three-pointed star marque as it is already gearing for the release of its derivatives, including its AMG variant and Coupe model.

Recently, the GLC Coupe was once again spied on the road just outside the Nurburgring endurance track. Like the last spy shots of walkoART, the vehicle is still covered in partial camo.

Based on the new spy video, the GLC Coupe is expected to mirror the major styling elements of its full-sized SUV sibling. These include cleaner and smoother surfaces ditching the heavy use of rigid body lines to accentuate its key areas unlike its predecessor. 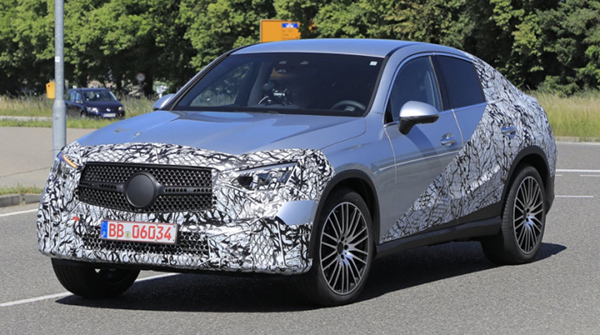 The GLC Coupe uses the MHA (Modular High Architecture) platform of Mercedes similar its SUV counterpart. This time though, it features a sloping backside reducing its greenhouse to maintain its coupe profile. Meanwhile, the single horizontal bar on its front grille and regular exhaust ports indicate that what we are looking at here is the standard Benz trim of the auto.

Like the GLC SUV, the GLC Coupe will follow the powertrain offered by the C-Class core model of Mercedes. With that, it will house the same 2.0-liter mild-hybrid inline-four engine with at least 258 hp and 295 lb-ft of torque. Similarly, its AMG model is projected to get up to 644 hp.

The Mercedes-Benz GLC Coupe is expected to make its debut before the current year ends.