Mercedes has yet to reveal the new AMG C63, but we all know its crossover equivalent can’t be far behind. After all, the standard GLC has been revealed and we’ve seen our fair share of images of the AMG version that will go up against the BMW X3 M. In an attempt to unofficially preview the GLC 63, our good pals at Kolesa have digitally peeled off the camouflage from a prototype that was recently spied undergoing testing. 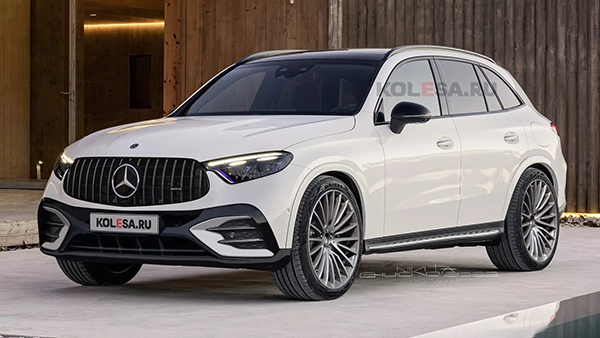 Featuring the Panamericana grille and quad exhaust tips, the high-performance crossover will look substantially more aggressive than the Benz-badged GLC. It’s bound to get wider wheel arches to fit larger wheels and beefier brakes with superior stopping power to match the potent plug-in hybrid setup. Spy shots have revealed the GLC 63 will also have rear-wheel steering, which should pay dividends in terms of stability when going fast through a corner.

While prototypes have exhibited fake front air intakes that have been carried over onto this rendering, we have reasons to believe that won’t be the case with the production model. Why? Mercedes-AMG brought a thinly covered 2023 C63 at the Goodwood Festival of Speed last month and that one had functional air intakes on both corners of the bumper. We’re not seeing a reason as to why its crossover sibling should have those fake plastic bits. 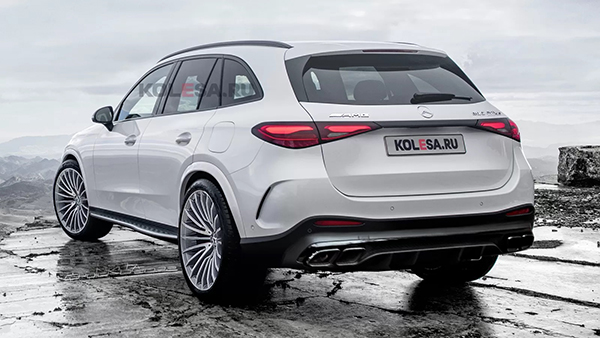 Much like the C63 sedan and wagon, the GLC 63 will lose the V8 engine. It won’t downsize to Mercedes’ silky smooth inline-six as the powertrain will in fact drop four cylinders. The new wave of “63” cars will use a turbocharged 2.0-liter gasoline engine from the compact “45” models but installed longitudinally. Corroborated with a rear-mounted electric motor, the PHEV setup will be good for about 670 horsepower and 750 Newton-meters (553 pound-feet) of torque.

With the addition of an e-motor, it means the C63 and GLC 63 will be sold exclusively with 4Matic whereas their predecessors were a rear-wheel-drive-only affair. Weight shouldn’t be a concern since the three-pointed star has said the PHEV setup will still be lighter overall than the old M177 V8. That said, we’re fairly certain the “there’s no replacement for displacement” crowd is going to miss the twin-turbo 4.0-liter unit.

Mercedes will initially unveil the C63 Sedan / T-Modell later this year, perhaps in October at the Paris Motor Show. The GLC should follow suit in 2023 when it’s likely going to be joined by the “Coupe” derivative. The German luxury marque won’t launch another C63 Coupe / Convertible since these will be replaced by a CLE 63 that’ll also serve as a substitute for the next-gen two-door E63 models.