Mercedes GLA chalks up a hat-trick of wins in the small premium SUV class, because there’s not a single rival that can compete with the German model’s talent and the choice available in one single package. 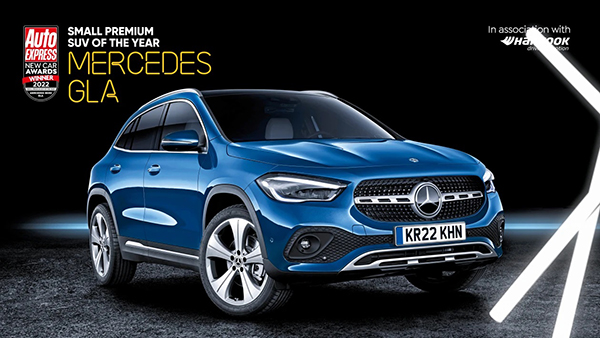 First, there’s the number of variants available. At the lower end of the scale, there are modestly powered petrol and diesel options that manage to combine fuel-sipping MPG figures between the pumps with a keen turn of speed for the cash. Then, if you’re a company-car driver, the GLA 250 e provides a plug-in hybrid powertrain that not only delivers a firm shove in the back courtesy of its 215bhp output, but also achieves WLTP-certified CO2 emissions as low as 31g/km and an electric-only range of 37 miles.

Then there’s the fire-breathing GLA 45 S – AMG’s take on the SUV gives true supercar-baiting performance, with the 0-62mph sprint taking a rather bonkers 4.3 seconds.

What impresses us more than that choice is that each of these models manages to nail its brief perfectly. The entry-level cars are soothing to drive, the plug-in hybrid achieves great fuel economy figures in the real world, while the GLA 45 S version will set your pulse racing as fast as the finest hyper-hatchbacks.

But the appeal doesn’t stop there. Inside, the fabulous cabin design is enhanced by the MBUX infotainment system, which combines a pair of razor-sharp displays with trendsetting tech such as augmented-reality instructions for the satellite navigation and multi-coloured ambient lighting. These systems are so neatly integrated into such a widely appealing package that it’s easy to see why the GLA has taken its third consecutive victory in this category.

Mercedes GLA 200 AMG Line Executive (£38,345)
For most buyers, the entry-level petrol engine will be more than adequate; the 159bhp GLA 200 still offers strong performance and decent efficiency. In AMG Line Executive trim, it’s priced at £38,345, and gets 19-inch alloys as standard, plus a reversing camera, 64-colour ambient lighting and sports front seats.

Cupra Formentor
This class is awash with stylish contenders, but the Cupra Formentor offers a different prospect. While its VW Group mechanicals are familiar – ranging from a plug-in hybrid to a 306bhp petrol turbo – it’s the unique badge and the chopped-roof SUV proportions that make it truly stand out.

Range Rover Evoque
Style and tech are pretty much a given in this segment, and the Evoque has both in spades. Less expected is a car that combines such accomplished on-road manners with staggering off-road ability. It might look like a city slicker, but it’s equally at home rolling its sleeves up and mucking in.