Still the Mercedes it always was, better balanced, prettier second GLA now has it all.
The second generation of Mercedes-Benz’ mud-plugging A-Class, the GLA actually isn’t a mud-plugger at all. For example, this one is front-wheel drive. So unlikely to succeed hanging off a cliff or dicing in the dues. It’s all about the pose, you know. All-wheel drive is reserved for this one’s bigger brothers. But as a spacious, stylish family taxi or even a bloated hottish hatchback, this GLA certainly touches the spot. 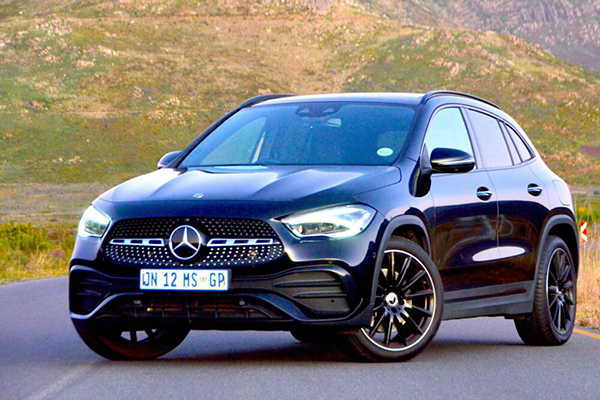 GLA Benefits the best of its A-class Genes
Now far more balanced and prettier than the car it replaces, GLA benefits the best of its A-class genes. There’s a healthy dose of GLC and GLE in there too, which is cool. Rather that, than just different lengths of the same old sausage that some of Benz’ favorite rivals churn out ad nauseum. This car is quite different to the step above GLB and flagship GLS. Kinda like bratwurst and bangers. Or just a good old hot dog.

Talking styling, we thought that Mercedes miscued on the old GLA’s design. It’s sad looking head and taillights looked like they just taken straight right foot from Connor McGregor. Happily, that’s now all history and then some, second time around. Not that it mattered — they sold over a million old GLAs worldwide. We’ve often told you that styling is subjective. If you disagree on what we say about a car’s looks, just ignore us.

Our tester’s bold style even prompted a risqué evening shoot. Strutting a pair of power domes on the bonnet atop a sparkly grille with a central star, GLA also gets all-round protective cladding to add to that rugged appeal. Bigger wheel arches also make space for those 19-inch alloys, which further contribute to a third of an inch taller 5.6-inch ground clearance. In black, of course. 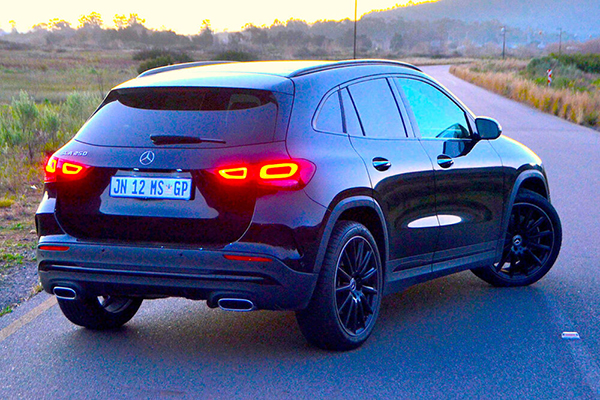 GLA 250’s Sexy Cabin is its Party Trick
Step inside and there’s extra front headroom and rear leg room. That despite GLA’s body length being chopped by half an inch. It however rides on an inch longer wheelbase and stands some 4,3 inches taller than the old one. Load capacity is up behind those optional new versatile and individual 40:20:40 split-folding rear seats. They bring 5.5-inch fore and aft, as well as backrest rake adjustment. GLA also has a cool standard height-adjustable load floor that you can store more private stuff under, too.

This car’s party trick, however, must be its sexy cabin. And that’s another bit of this GLA 25o that we really like. A mini me GLS 580 (it’s basically the square root of that car) our tester came with Merc’s industry standard 7-inch instrumentation and 10.25-inch MBUX Hey Mercedes infotainment touchscreens. They are merged into a mighty single display atop those classy turbine climate vents. The gauges sit behind a multifunction steering wheel, to the right of a full MBUX infotainment unit.

That includes Apple CarPlay, Android Auto and the rest. Ours also had augmented reality navigation with learning software, voice control and a full color head-up display too. It’s all best run by Merc’s state-of-the art multifunction steering wheel’s tiny touch pads. Driving functions to the right. Infotainment left. Interestingly the GLA dash is smaller than the one on big brother GLS. But it does the job just as well and packs pretty much everything that flagship does too, on both of those screens.

Quicker Even than Mercedes’ Claims
This one has Merc’s frisky 221 hp 258 lb-ft 2-litre turbo petrol nicked out of the A250 and an 8-speed dual-clutch autobox under that muscular bonnet. They promise it accelerates to 60 mph in 6.8 seconds and on to 130 mph. How the hell can we believe them? Well, that’s why we test cars in the first place. Anyway, our man blasted down our test patch half a second quicker than that in 6.38 seconds with our faithful test kit strapped to this black GLA 250. We like test cars that are quicker than claimed. The most important numbers are listed below, as always.

Solid and impressive on the road, it certainly drives more like a hot hatch than a sport ute. Handling is progressive, it rides well, solidly in fact and that turbo petrol lump gets on with it, with aplomb. The eight-cog box is seamless, but nice and responsive when flappy paddled gear-to-gear. It’s mighty economical. And it has a pleasant demeanor about it too. Oh yes, it turns heads. Even though it’s the baby of the G bunch. 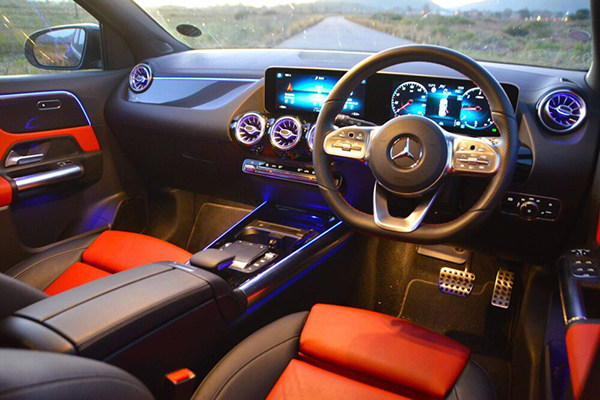 It’s a Mercedes-Benz After All
The Mercedes-Benz GLA 250 is an impressive little number, especially in this AMG Line. Sure, it comes at a little bit of a premium, especially in this fat cat get-up. It plays an interesting role in the entry SUV arena, for the want of a better word. That’s a hugely competitive space, where the GLA always has been a strong rival. Now the new one is just all that much better. And clearly good enough to consider. Even if you’d never considered going premium. It’s a Mercedes-Benz, after all.