Automakers often tailor their product lines for various markets. Numerous vehicles sold in the US aren’t sold elsewhere in the world, and likewise, we often don’t get certain models sold in Europe, Asia, or Africa. Typically, luxury brands like Mercedes-Benz, Audi, and BMW have a fairly global product lineup where only a model here or there doesn’t get released in a certain market, like the BMW 128ti hot hatch not being sold in the USA. Mercedes is generally pretty good at offering a standardized lineup, but for some time now, the brand’s cheapest SUV offering has been the Mercedes-Benz GLA 250. That could be set to change, however, as CarBuzz has uncovered a trademark filing with the United States Patent and Trademark Office for the GLA 200, indicating that the more affordable SUV could be US-bound.

For those who don’t know, the GLA 200 is Merc’s most attainable SUV in other markets. Utilizing the same MFA2 front-wheel-drive platform as the A-Class Sedan and CLA-Class, the GLA 200 uses a 1.3-liter turbocharged four-cylinder engine producing 161 horsepower and 184 lb-ft of torque. This is significantly less than the GLA 250 (pictured) which currently forms the base of the US lineup, which produces 221 hp and 258 lb-ft from its 2.0-liter turbo powerplant. While the latter is available in both FWD and AWD formats, the GLA 200 is only sold as a FWD model. When asked for comment, a Mercedes spokesperson said, “We will continue to offer the GLA 250 in the US market.”

While this doesn’t confirm the GLA 200’s arrival, it does confirm that it will live alongside the GLA 250, while we expect the AMG GLA 35 and 45 models to continue as well, compensating for the Mercedes-AMG A35’s early demise in the US. 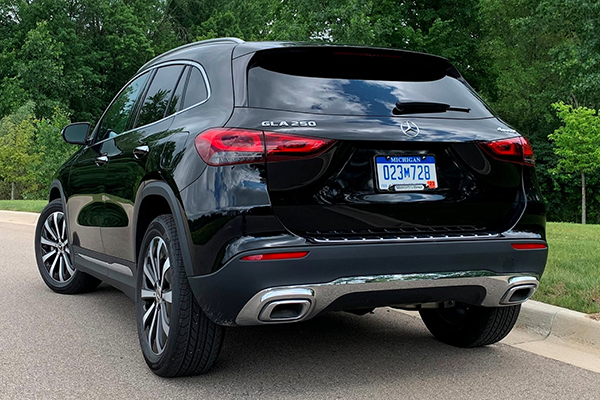 The application was filed on December 16, 2021 and has been moved to the New Application Processing department at the time of this writing where it is noted that the “new application will be assigned to an examining attorney approximately 6 months after filing date.” Mercedes-Benz USA has already published information about the 2022 GLA-Class lineup, which has no mention of the GLA 200 and retains the GLA 250 as the base model, starting at $36,400. Based on the aforementioned six-month timeline, the new trademark registration would come into effect midway through 2022, just in time for the GLA 200 to join the lineup as a 2023 model. Given the filing has been marked with “intent to use,” it seems almost certain tha we’ll see the GLA 200 badge in use soon.