A YouTuber decided to continue the series in which he performs a couple of hardcore tests on a Mercedes-AMG G 63. He unexpectedly upped the ante this time – the SUV was carefully brought on top of a shed with the help of an excavator, and afterward, it was let go with him and a cameraman inside it. Here’s what followed and why they did this.

Dropping my brand new G-Wagon through a house

The Mercedes-Benz G Class is quite popular in North America, especially in the U.S. The SUV looks good, sounds cool if the V8 is the engine sitting under the hood, and it comes with enough off-road capabilities. But not everyone buys it because it’s sturdy or because it has a long history of facing adversities. Some people choose it just because it’s a luxury vehicle, and there’s nothing wrong with that – everyone has options in today’s market to have their way.

But a YouTuber decided to, putting it mildly, properly test the G-Wagen. The vehicle was taken to the desert, where it survived a very long jump and some trailer mishaps, and it was driven twice into a swamp. Now, WhistlinDiesel took it to the next level – he dropped the 7,050 lb (3,198 kg) vehicle on a shed that was decorated to look like a little house.

The story behind this unexpected video is that of a girl that wanted a G-Wagen from her parents. They couldn’t buy her one, so she secretly wishes an SUV would appear out of nowhere as she’s blowing out the candles on the cake. And, you got to believe it, a red one just fell through the roof.

With this sketch in mind, the guys get an excavator, secure the G 63, position it on top of the shed, and then drop it while the YouTuber and a cameraman are inside. The owner of the channel seems to have enough faith in the G-Wagen as he is seen not wearing any protective gear. Furthermore, they climb inside the SUV through the sunroof. 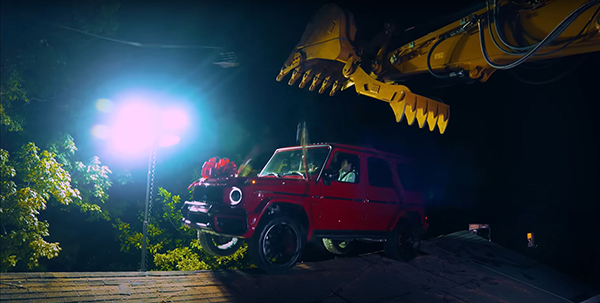 From the looks of it, the fall wasn’t that long. Both guys got out without any visible injuries. The vehicle, however, had to be returned to a shop for some repairs. You can watch the aftermath in the video down below.

The G-Wagen drop test is also trying to spread awareness about a charity that’s trying to support patients who need financial help.

Please keep in mind this stunt has been done in a controlled environment. It shouldn’t be replicated.

The YouTuber is also awaiting a judge’s decision in a criminal case where he and other members of his team stand accused of splashing, which is a class A misdemeanor in his state and could mean jail time if convicted.