You really don’t think you’re going to like a seven-seat electric crossover very much. But behold the oddly impressive Mercedes EQS SUV. It’s good at a great many things. 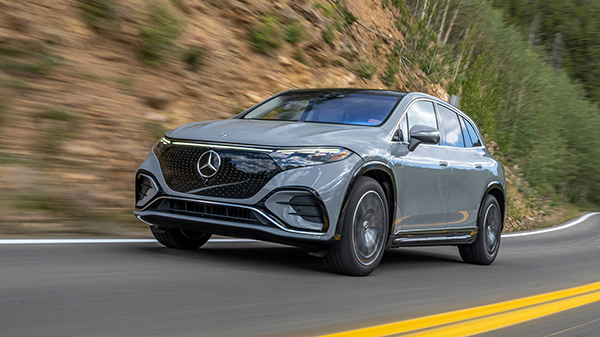 You’re in Range Rover territory, in that when the electric Rangie arrives in 2024, it will have to be better than this surprisingly good-to-drive Benz. The SUV’s 215kg weight penalty over the EQS saloon helps give it the same five-star ride comfort – and, despite being taller than the saloon, there are no trade-offs like excessive roll, yaw or pitch.

There’s improved headroom front and rear, and the rear seats are higher, giving passengers a better view. We drove the 536bhp Mercedes-Benz EQS SUV 580 4Matic – read on for our first impressions. 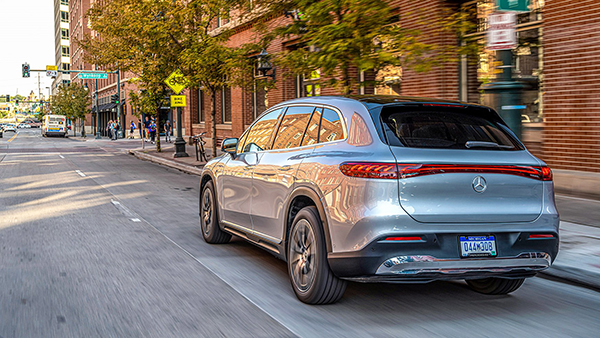 Mercedes EQS SUV review: how does it drive?
You won’t mistake this for anything but an electric Mercedes: its smooth grille replacing historical air intakes, soap-bar aero bodywork and brand familiarity. It looks good, inside and out. The materials used throughout are luxurious and well put together. It feels like a proper Merc should and isn’t it a relief we can say that after the wilderness years of wobbly quality?

Like most EVs, performance when you prod the accelerator is immediate and substantial. But full ‘throttle’ does not last – find a long straight, sink your right foot to the floor and the boost is sudden and severe, yet fades after about 10 seconds.

Asked nicely, the new Merc ESQ SUV 580 will whoosh silently in 4.6sec from 0-62mph and on to a top speed of 131mph – that’s only half a second less brisk than the EQS saloon. Blame the bigger frontal area and extra mass.

While the middle-ranking 450 4Matic does the job in six seconds flat, the entry-level 450+ loses another squealing seven tenths during take-off. 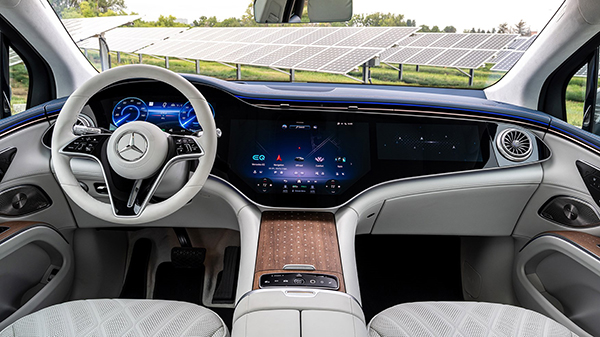 Charging, battery specs
If our two-day test drive in speed-restricted North America is anything to go by, our Mercedes EQS SUV review suggests a range of 250 to 300 miles is realistic, while the average waiting time at a 200kW charger is half an hour – that’s okay, but not nearly as quick as the 800-volt rivals from Korea.

Air suspension and rear-wheel steering are part of the package, but note that the pop-up third row of seats, which shrinks the luggage space to a token 195 litres, is an option. With only the first row of seats upright, boot space is a colossal 2100 litres.

The EQS SUV’s steering is on the light side, but it makes the big car feel smaller, and there is no artificial flavouring in the software pie. The brakes are grabby at first, pedal travel is long and mushy under pressure, and the effort over the final 50 yards is not exactly premium either. Brake feel is one of the few black marks against this car. 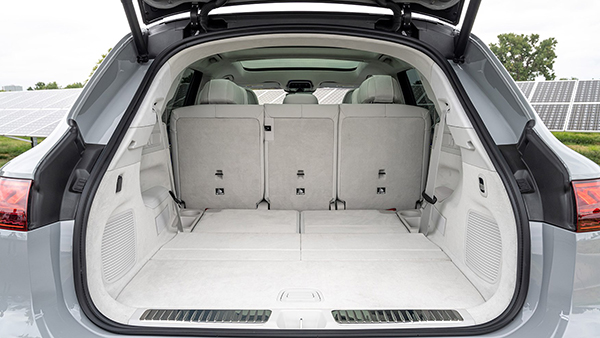 Ride and handling
The new Mercedes-Benz EQS SUV hides its considerable heft remarkably well. Handling is as failsafe as can be when 2735kg of weight and up to 633lb ft of forward thrust arrive jointly at the force times distance T-junction.

Hairpins are a hoot, thanks to rear-wheel steering and the chassis somehow conspires to make you forget you’re driving a tip-toe-tall SUV.

This is a studiously clever car, with the very latest semi-autonomous systems that Daimler can muster. The auto-steer capability in Level 2+ mode is actually quite impressive.

You can also tow with this electric car: Mercedes quotes a 750kg payload.

Verdict
To these eyes, the EQS SUV looks better resolved than the saloon version of the EQS, although whether you’d prefer this over the similarly priced but quicker BMW iX M60 depends on how you weigh up the BMW being only a five-seater.

There’s lots going for the 2023 Mercedes-Benz EQS SUV: we love the plush ride, the oodles of torque and the all-pervading quality and overall class.

Yes, it’s expensive – and we suspect many CAR readers will loathe the over-complex interior. But unlike the EQS saloon, the SUV has all the space you will ever need, and drives in a most agreeable way.