Last year, Mercedes-Benz introduced the world to its first modern EV built on an electric-specific architecture, the aerodynamic and distinctive EQS. The slippery full-size luxury sedan is based on the modular EVA2 platform, suitable for a variety of different vehicle types including the smaller, lower EQE sedan. Today, the automaker is going in the opposite direction, introducing us to the three-row EQS SUV.

The new Mercedes EQS SUV has been revealed. The German manufacturer’s newcomer is a battery-powered alternative to its existing, Range Rover-rivalling GLS, as well as a taller-riding, seven-seat stablemate for the EQS saloon.

It will go on sale later this year, probably starting from around £110,000 for the rear-wheel-drive EQS 450+. A pair of four-wheel-drive versions have also been confirmed, as has a luxuriously appointed Maybach model, which will be revealed at a later date. No high-performance AMG versions of the EQS SUV have yet been announced.

As with the EQS saloon, the SUV makes use of the brand’s EVA2 all-electric platform, and shares its motors, battery systems and on-board tech with the limousine EV. All versions of the EQS SUV boast a 107.8kWh (usable) battery, and it’s the entry-level 450+ that makes the most of this large capacity. With an electric motor rated at 355bhp and 568Nm, Mercedes claims a maximum range of 410 miles. 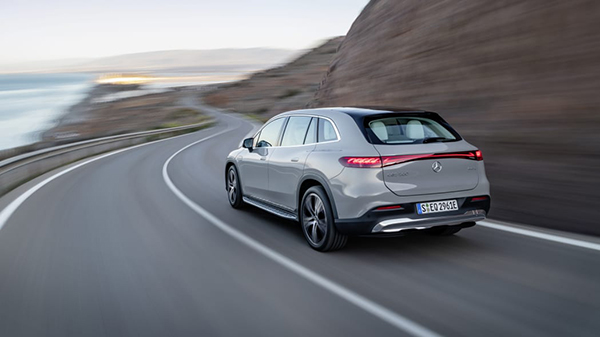 An all-wheel-drive 4MATIC version of the 450+ is also offered, with the same 355bhp output from a pair of electric motors – one on the front axle, the other on the rear – but with torque stepping up to 800Nm. Range takes a slight hit, at 380 miles on a full charge. No performance figures have been confirmed.

The most potent version from launch is the EQS 580+ 4MATIC. It has a 536bhp/858Nm all-wheel-drive system, but as with the 450+ no performance figures have been revealed. A 0-62mph time of around 4.5 seconds is possible, however, while maximum range stands at a claimed 381 miles.

All versions of the EQS SUV have Airmatic air suspension with adaptive dampers. Its settings can be toggled via the drive-mode selector as on other models using the system. However, on four-wheel-drive EQS SUV models there’s an extra mode alongside the Eco, Sport, Comfort and Individual settings: Offroad, which can raise the ride height by up to 25mm. 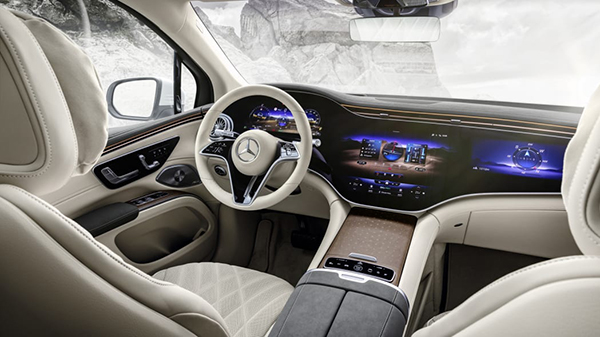 Four-wheel steering is fitted as standard, enabling the rear wheels to turn by as much as 4.5 degrees. This gives greater agility and a tighter turning circle at low speeds, and improves stability in high speed corners. One of several over-the-air upgrades that can be bought via the infotainment system enables up to 10 degrees of movement on the rear axle. Other technology that can be installed post-purchase includes trailer assist and augmented-reality navigation.

At 3,210mm, the SUV’s wheelbase is the same as the EQS saloon’s, but the body is slightly shorter, at 5,125mm. Still, the SUV is around 200mm taller, and the traditional two-box SUV profile allows for a third row of seats, giving the EQS passenger-carrying flexibility to rival the Tesla Model X. Seven seats are optional, however, and the EQS SUV is a five-seat SUV as standard.

The cabin features Mercedes’ Hyperscreen as an option, as found in the EQS saloon. It uses three large screens to transform the dashboard’s entire surface area into a touch-sensitive display.

Otherwise, a 12.3-inch digital instrument panel and a 12.8-inch portrait touchscreen are standard. As part of the car’s luxurious approach, rear-seat infotainment is offered as a feature of the Entertainment Plus pack, providing two 11.6-inch monitors. 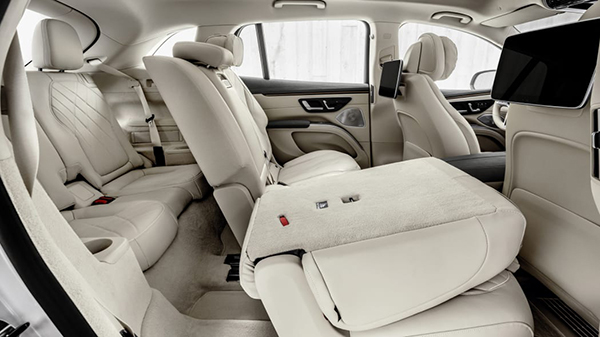 Q: Is the EQS SUV more important than the saloon?
A: It really depends on the market. Regarding the US and China, the SUV is really important to get right for them. But we always start development with the saloon and build from there.

Q: How does the EQS SUV influence the upcoming EQE SUV?
A: The EQE will sell in much higher numbers than the EQS. We don’t know yet about the sales split between the EQE saloon and SUV, but of course it will look as you expect. All four cars [EQS, EQS SUV, EQE and EQE SUV] come from the same platform and were developed together.

Q: What’s different about the EQS SUV and EQE SUV models?
A: The smaller wheelbase is the main difference; it’s 90mm shorter. That’s why you only get the 10-module battery in the EQE cars, the 90kWh version. The big, 120kWh battery provided with the EQS will not fit in the EQE. The EQS SUV is a large car, of course, so we will offer it only with the bigger battery.

Q: Why does this SUV have more power than the saloon?
A: The EQS SUV has an extra 20kW (27bhp), and this is done using identical hardware to the saloon’s, so the saloon will get this update later on.