The new Mercedes EQS SUV is an extraordinary luxury car. It’s imposing, quiet, refined, full of clever tech and premium features. It’s a great cruiser and offers a truly cavernous interior. But at this price you want a car that can do it all, and at times the EQS off-roader feels like it lacks the talent in some areas that a car like this needs to be impenetrable. We’d wait for the forthcoming all-electric Range Rover. 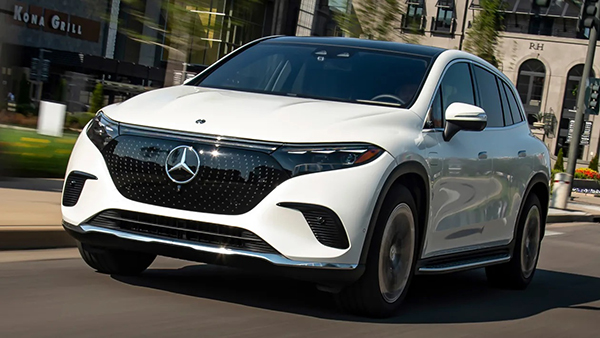 The Mercedes EQS SUV is arguably one of the most exorbitant and ostentatious new cars of 2022. Not without merit – and we’ll come to that in a moment – it launches just as the country prepares for what looks to be the most significant cost of living crisis in a generation.

But to dismiss it as a fancy, frivolous and irrelevant stagecoach for the world’s super-rich would be unfair. Mercedes’ very own S-Class has always been seen as a springboard for new technology, and the EQS is no different. Kit trialled here will filter down to more affordable models in time.

Take it at face value and the numbers – price aside – are compelling. A huge 120kWh (108.4kWh usable) battery that is good for, Mercedes says, 379 miles of range. Speaking of charging, the EQS can replenish its cells at speeds of up to 200kW – all without the even more expensive 800-volt electrics that underpin cars like the Porsche Taycan and Kia EV6. Or looking at it another way, at this level of the market, maybe that should be standard?

Either way, it means a 10-80 per cent charge takes just 31 minutes. There’s a caveat, of course; tipping the scales at more than 2.7 tonnes, the EQS SUV isn’t particularly efficient. Mercedes claims between 2.5 and 3.0miles per kWh, though in reality we saw figures at the lower end of that range. Still, that should be enough for 250-270 miles without too much cause for concern. 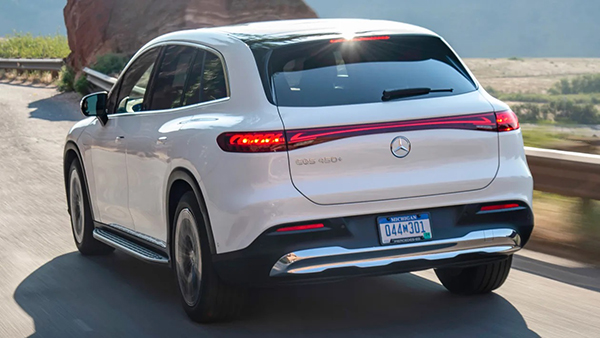 Then there’s the cabin – even without the circa-£8,000 Hyperscreen (exact specifications have yet to be confirmed) – the EQS represents the very best of Mercedes craftsmanship. It feels genuinely luxurious, from the woods, leathers and metals used to trim the centre console, to the armchair-like seats and pillow-soft headrests. No corners have been cut when it comes to fitting out the brand’s flagship SUV.

It’s the set-up you see in these pictures that we’d actually recommend. Sure, the three-screen layout is the EQS’s party piece, but few will ever truly utilise the myriad functions – and the passenger display feels like little more than a gimmick. The standard two-screen set-up will save you thousands, and it’s still full of trick features, while also being responsive and relatively intuitive to use.

But luxury can’t simply be defined by the materials used or the number of screens offered. A car’s high-end feel runs deeper than that, and the thing that makes the EQS appear more premium than any of its rivals is refinement. The EQS SUV, despite its size, bulk, and bluff front end, is unquestionably one of the quietest cars we’ve ever driven.

At 70mph, the cabin is all but completely silent. Even on 22-inch wheels, there is very little road noise. Wind noise isn’t noticeable until you approach three-figure speeds, and the ride – save for the odd sharp jolt or pothole – is sublime. Comfort is what the EQS SUV does best. 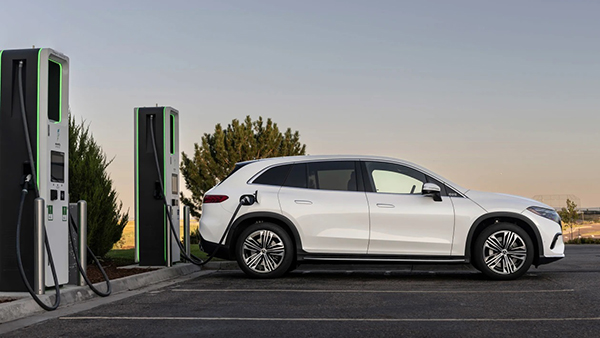 That’s true in both the front and middle rows of seats. You get a commanding driving position, and where the EQS saloon loses out on headroom in the rear, the SUV’s taller roofline offers rear-seat occupants all the space they could ever wish for. Sitting three abreast should be no trouble at all.

The EQS will be sold exclusively with seven seats here in the UK, though the 450-badged test model we tried was fitted with the five-seat configuration offered in other markets. We did manage to take a seat in the third-row of another car, however, and while space is more generous than in, say, a Tesla Model X, it’s still best reserved for children or smaller adults. Fit and finish, even in the rearmost row, remains immaculate.

Boot space is generous too – as it should be for something measuring 5,125mm nose to tail. There’s 565 litres with the very back seats folded flat, expanding to 2,020 litres all told. That’s significantly more than you’ll get in an Audi e-tron.

Given the EQS SUV’s strong refinement and supple ride, it’ll come as no surprise that this is a fantastic long-distance cruiser. The quiet cabin, teamed with all the standard-fit safety and driver assistance tech, gives the EQS perfect motorway manners. 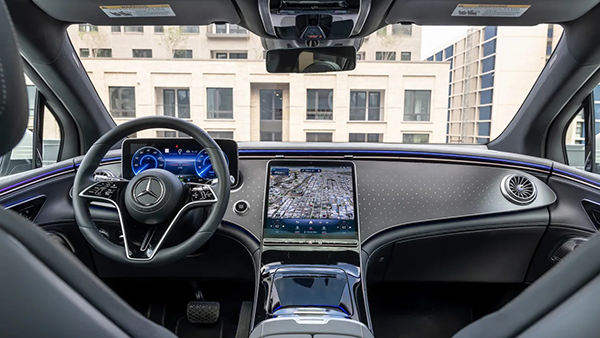 Those who want to experience the any-speed instant torque often associated with high-power EVs might want to take a look at the top-spec EQS 580. The 355bhp 450 4MATIC is brisk from a standstill, but performance tails off at higher speeds. It’s still capable of quick overtakes, but it won’t pin you to your seat like the range-topper will.

Yet whereas it’s easy enough to disguise the car’s weight while going in a straight line, it’s not so simple through the corners. And actually, the way this car handles is all the more impressive because of that. Indeed, the EQS SUV trims a neat line – without too much in the way of pitch or body roll.

It’s just never that exciting. At upwards of £100k, you almost want a car that can do it all. Luxury, practicality – even fun, should the mood dictate. But the EQS SUV feels numb for the most part, in a way a BMW iX does not.

In fact it’s that car that really shows the EQS’s failings. Even fully-loaded, BMW’s iX xDrive50 undercuts the Merc by almost £20,000 – and it’ll match it for luxury, range and charging tech. Yes, the iX only has five seats, but if this isn’t an issue for you, then it’s a far superior car to drive. 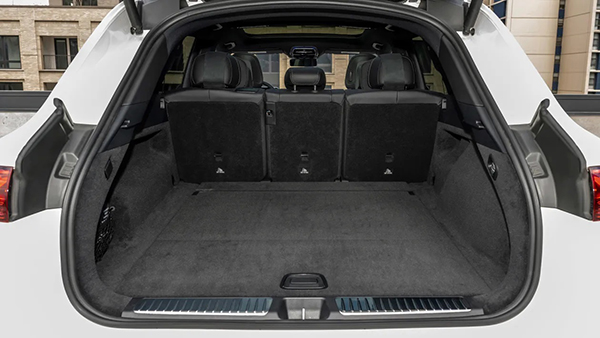 What’s more, Mercedes still hasn’t mastered the art of regenerative braking. The EQS gets an adjustable set-up, and while the most aggressive mode isn’t quite strong enough for one-pedal driving – unlike in the smaller EQA and EQC, oddly enough – it’s the brake feel in conjunction with the regen system that sets the most significant alarm bells ringing. At times, the left pedal gives the sensation it’s being pulled away from your right foot, as the car struggles to juggle the two systems seamlessly.

One area where the brakes did impress though, was on a short but challenging off-road route. The EQS’s dedicated Off-Road mode and clever Downhill Speed Regulation (DRS) system manages to control descents in complete silence. Few owners will ever use it, but it bodes well for the forthcoming EQG electric G-Class.

We’ll have to wait a little longer for full transparency on EQS SUV prices and specs, but taking the EQS saloon as a benchmark, it’s likely UK buyers will get a choice of Luxury and AMG Line trims, plus the usual Premium and Premium Plus packs – with the more expensive models adding items such as bigger wheels, a 360-degree camera, a Burmester sound system and a head-up display.

One option box worth ticking will be the 10-degree (4.5 degrees as standard) rear-wheel steering system, which reduces the SUV’s turning circle to that of a Volkswagen Golf. The ability to turn so tightly is a little disconcerting at first, but when a car is this big and near-impossible to park, every little helps.