This isn’t the first time we’ve seen a Mercedes-Benz EQG prototype in public with its electrifying blue/black camouflage. However, this is our first look at the interior of the chunky off-roading EV. And to no real surprise, it looks much like a combustion-powered G-Class on the inside. But there are some notable differences. 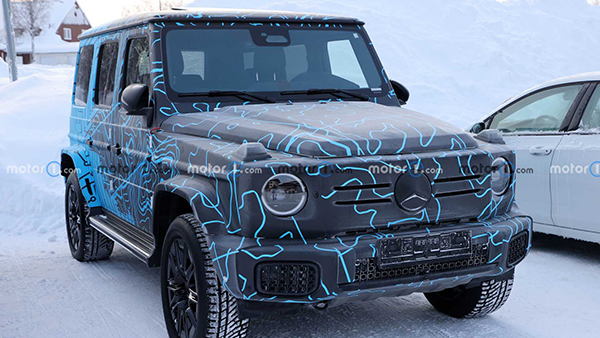 Caught parked during cold-weather testing, the driver of this EQG prototype left the dash uncovered showing the wide digital display stretching from the driver’s side to the center stack. It appears to be the same layout used in the current G-Class, but draw your attention to the controls below it. The cluster with round vents and buttons in the middle is similar, but we can see new functions including the EQG Tank Turn, allowing the SUV to basically rotate in place. That comes courtesy of four electric motors, one driving each wheel.

Moving even further down, the analog clock and buttons surrounding it are gone. A thin strip with toggles appears to be the only other bank of tactile controls on the dash. The center console also has fewer controls, though the layout remains the same as that on the G-Class. A flat-bottomed steering wheel has us wondering if this test vehicle could be a performance variant. 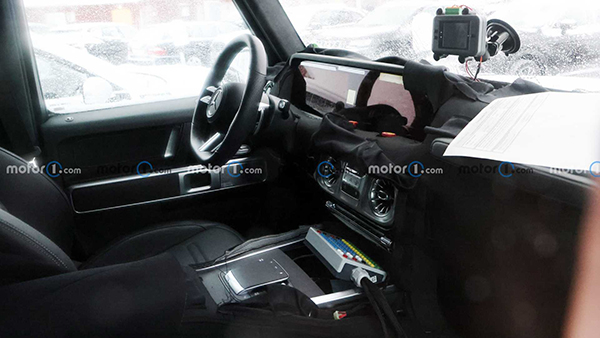 The outside is covered with the same “digital” camo we saw on a prototype earlier in January. The mysterious rectangular vents in the rear fender flares are also back, with a single photo offering a clear view through it to the tire behind. We theorized it might have something to do with brake cooling, but might this be some clever aero trickery to help the EQG slice through air more efficiently, like the EQXX?

Whereas other Mercedes EVs have a distinctive design versus combustion-powered counterparts, the EQG will still brandish a square, upright shape matching the G-Class. A ladder frame supports the body, though under the skin there are notable changes to accommodate a beefy battery pack. Specifics on total power to the individual motors are unknown at this point, as are estimated ranges.

That should change later this year. We expect the EQG to debut before 2023 is out, going on sale next year as a 2024 model.