This is my Mercedes-Benz EQG Concept into pickup G-Traveler and further into 6×6 version Design IDEA. 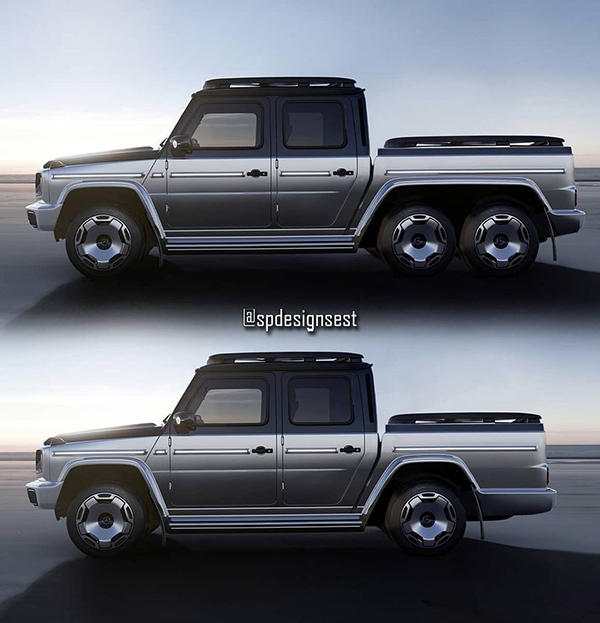 At this year’s Munich Motor Show, Mercedes-Benz previewed the inevitable electric future of the G-Wagen with the EQG Concept.

Some might say that it’s sacrilege to give the iconic 4×4 a zero-emission powertrain, whereas others would gladly see them go the extra mile and come up with something truly ludicrous, like a 6×6 variant.

Part of the latter category, spdesignsest put his pixel rearranging skills to work, coming up with a true all-quiet beast. The rendering portrays it with an extended back end to make room for the extra axle, and an open bed behind the cockpit. 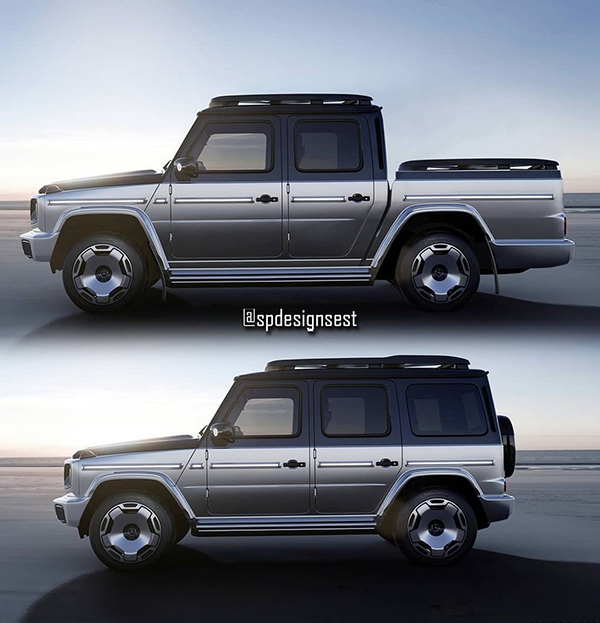 Everything else remains identical to the study, including the entire design up to the C pillars, wheels, and even the black and silver dual-tone paint finish. However, such a model would look more muscular, with beefed-up styling, bespoke bumpers and side skirts, trail lights, and elevated ground clearance. It would probably bear AMG’s signature too, thus becoming more potent than the EQG.

We still don’t know much about the powertrain of the show car, but Mercedes has confirmed that it features no less than four individually-controllable motors, hooked up to a two-speed gearbox. It’s possible that it dwarfs the Mercedes-AMG G 63 in terms of performance, without sacrificing the rock-crawling, mud-driving ability.

Should you not be a fan of brawny six-wheel drive vehicles, then the second rendering, shared by the same Instagram webpage, portrays the EQG with four wheels, and an open bed. It too retains the traits of the concept, but boasts an increased hauling capability. Considering that it wouldn’t take much to build one, do you think Mercedes should go for it once they launch the battery-electric G-Class? Speaking of which, the unveiling date of the production model is yet unknown, but it’s probably a few years away.