Here is my rendering for the new Mercedes-Benz EQG, the electric version of the iconic G-Wagon. If ever the Dubai police decides to add one in its fleet, which I am sure they will in the near future this is how it could look like with the Dubai Police livery on it.

Although it’s been rumored for more time than we can remember, the Mercedes-Benz EQG is not yet ready for primetime. Instead, the German automaker simply offered a preview of electron-sipping off-road things to come in the form of the Concept EQG. So, we’re going to have to wait a little more (around 2024) for the series-production version to come out of the oven.

Here’s the thing, some of us don’t have the patience. Sure, if you’re a pixel master it’s also easy to take things into your own hands. Many of them did it even before the Concept EQG became official. This isn’t unexpected, considering the electric G-Wagen is something that’s eagerly expected by sustainable yet posh fans. 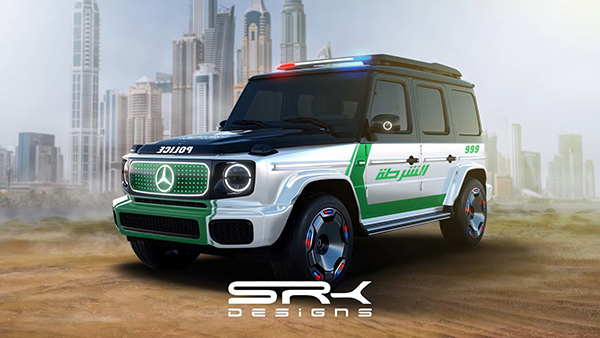 So, the virtual artist behind the SRK Designs account on social media has logically taken things a step further. In a very specific, crime-fighting direction. So, where do all the ultra-luxury and ultra-performance vehicles of the world find a life of fulfillment by catching bad guys? And don’t say Gotham because that’s not a real thing.

Of course, it’s the Dubai Police force. Thus, it was only natural for the Mercedes-Benz Concept EQG to morph into a luxurious yet sustainable aid of law enforcement. Sure, it’s just wishful thinking, for now. But let’s be frank – does anyone think the Dubai Police will miss the chance to have an all-electric legendary off-roader amongst its ranks?

If the 2024 series-production EQG keeps most of the Concept EQG’s design traits, it’s not hard to imagine the Dubai Police Edition might one day look almost exactly like this. Hopefully, by then Mercedes will also give us the entire specification sheet for the powertrain. We already know that it will pack no less than four electric motors… but how about the other figures, especially the sprint time and range?