Mercedes-Benz G-Class (also known as the G-Wagen) is a smashing success in the US, so much so that it’s tough to get your hands on a new one without paying a hefty markup. After a long run-up of speculation, the 2024 Mercedes-Benz EQG arrived at the 2021 Munich Auto Show as a “near-production study” showing what an all-electric G-Wagen will look like in the future. Unfortunately, Mercedes never said how “near-production” the EQG actually was. Until now. 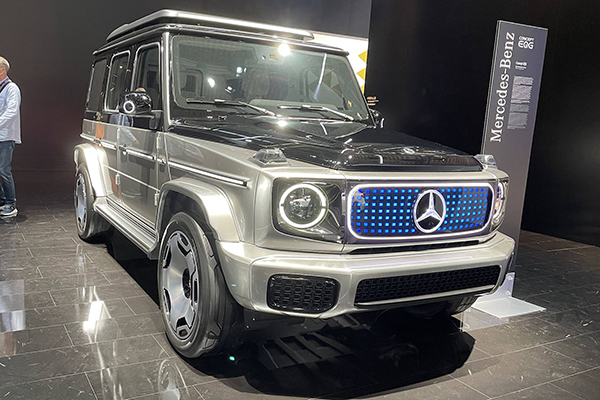 Speaking with Motor Trend at an event for the company’s new battery plant in Tuscaloosa, Alabama, Mercedes spilled the beans on when the EQG will arrive. Mercedes-Benz Chairman Ola Kallenius said the EQG will go on sale in 2024, following the upcoming EQS SUV and EQE SUV entering production this year.

Kallenius confirmed the EQG will ride on a modified version of the G-Glass platform, not any current or upcoming dedicated all-electric architecture. This means like the G-Class, the EQG will likely be built overseas, not at the new US factory in Alabama. For reference, the G-Wagen is currently assembled by Magna Steyr in Graz, Austria. No other details about the production EQG were shared, but we can assume this model won’t follow the mold set by other EQ models.

In concept for, the EQG packs four electric motors (producing an unspecified amount of horsepower) mated to a two-speed transmission. It packs the same 107.8 kWh battery pack from the EQS, which given the EQG’s boxy proportions, will make it difficult for Mercedes to achieve a super long range. The Hummer uses a battery around twice that size to achieve 300 miles on a single charge.

Before the EQG arrives in 2024, the three-row, more conventionally-styled EQS SUV will enter production soon, followed by the EQE SUV later this year. These vehicles will both use Mercedes’ EVA2 architecture, which also underpins the EQS Sedan and EQE Sedan. Future Mercedes EVs will use an upcoming platform called MB.EA, which will spawn a sporty version called AMG.EA (coming in 2025). Vans will ride on a VAN.EA platform, while smaller vehicles will get their own architecture called MMA.

Despite all this development currently under way, the EQG will have unique underpinnings.