Originally developed as a military vehicle, the Geländewagen morphed into a civilian off-road vehicle in 1979 with the W460 generation. A few makeovers and more than 400,000 units later, the G-Class family is prepared to make the biggest change yet in the guise of e-power. 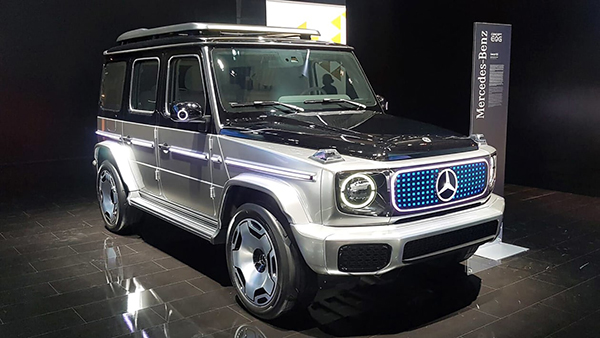 This is the latest Mercedes EQ concept, the Concept EQG, which has been revealed at 2021 Munich Motor Show. It previews an all-electric version of the brand’s legendary G-Class, slated for arrival in production form in 2024.

Despite the road car being some years away, the brand calls this new concept near-production ready. The design blends the traditional, two-box off-roader shape and profile of the G-Class with some of the design elements introduced across the new EQ line-up.

Since launch in 1979, the G-Glass has taken on minor and evolutionary visual design changes, even the ‘major’ redesign for the current-generation model in 2018 saw the big SUV retain its outlook as an uncompromising, boxy off-roader. For the all-electric version, Mercedes will continue this mild evolution rather than totally redesigning its most capable 4×4.

The angular silhouette retains many of the model’s most distinctive features, such as the front indicators mounted on top of the front wings, either side of the bonnet. Some traditional elements have been adapted for the electric powertrain though. For example, instead of a spare wheel mounted on the tailgate there is a new lockable box, which Mercedes says could be a handy place to store charging cables.

Unlike the EQA, EQB and EQC models, the EQG will retain the headlights of its combustion-engined alternative, though the round lighting elements are now separated not by a conventional grille, but a black panel, as is the case on other EQ-branded cars.

Other touches include an LED strip running on the front facing side of the roof rack – a modern interpretation of roof-mounted spot lamps – a ‘G’ logo integrated as part of the rack’s design, and a similar red LED strip at the rear of the roof acting as a brake light. New 22-inch polished wheels in a unique design have been fitted.

Mercedes is keen to stress that the EQG will remain an uncompromising off-roader, and as such, it’s not built on a pure-electric platform. Instead, the tough ladder frame chassis of the petrol and diesel car will be converted to accommodate a pure-electric powertrain, along with independent front suspension and a rigid axle at the rear.

The EQG’s electric powertrain will feature a two-speed automatic transmission, with a ‘low-range’ setting for off-roading. Mercedes says that the low centre of gravity and instant torque of the electric drivetrain should prove advantageous when it comes to off-road ability. It will be developed the same way as the standard G-Class, with extensive off-road testing at the test track on the 1,445-metre high Schöckl mountain in Graz, Austria.