Through its new Mercedes EQ range, the German luxury carmaker is expanding its lineup, adding a second electric sedan in the 2023 Mercedes EQE, a midsize offering equivalent to its gas-powered E-Class. The EQE is tasked with a tricky balancing act of delivering an all-new drivetrain and advanced tech-laden cabin that still retains the brand’s luxury cachet. 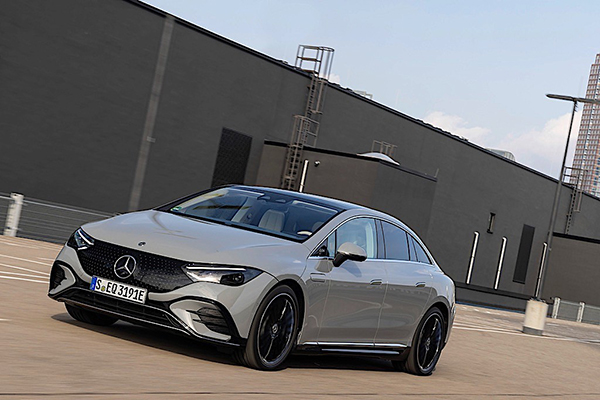 It largely delivers on all scores, though about the only traditional aspect of the EQE is the large three-pointed star logo embedded in the front fascia. While most executive class sedans have more formal three-box styling the new EQE takes a page from Mercedes CLS with its sleek coupe-inspired roofline. This arcing line on the EQE is more pronounced thanks to the shorter front hood and rear decklid. Front and rear overhangs are also minimal giving the EQE a tidy overall look despite its rather generous 122.9-inch wheelbase.

The front is conventional in appearance with black panel emblazed with the Mercedes logo in place of a traditional grille. There are lower inlets to provide airflow to the brakes and cabin. The hood features another traditional Mercedes cue in a pair of power domes. The sides feature subtle sculpting and the rear end tapers into what appears to be a liftback even though the car retains a traditional fixed rear backlight and trunk.

While Mercedes is touting its door-to-door hyper screen in the S-Class equivalent EQS and the EQE in Europe, our test model had a more conventional two screen arrangement consisting of a pair of digital displays, a 12.3-inch horizontal one in front of the driver and a 12.8-inch portrait layout in the center of the dash. Outfitted in the top Pinnacle trim, our test car had an abundance of wood veneers and white leather upholstery. The latter gave it more of a feel of piloting Louis Vuitton bag than a luxury automobile. Nevertheless, the EQE gives off the right vibe of being at the cutting edge of technology with all the luxury amenities you expect from Mercedes. 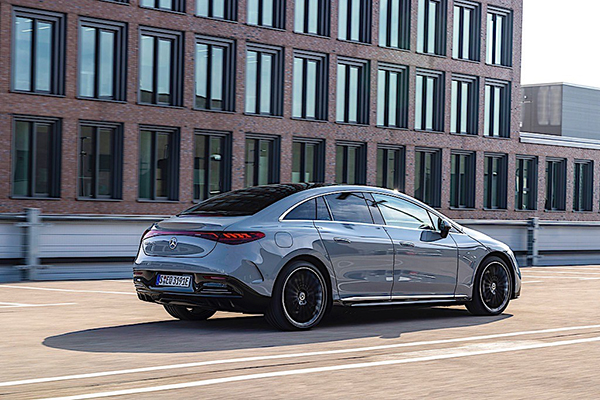 Consistent with its 350+ badging, this particular EQE model comes with a 90.6 kWh battery providing up to 305 miles of range. Final specifications have yet to be released, but the 4Matic version will likely offer slightly less range. For example, in the EQE SUV models, the base rear-drive model is rated at 305 miles (491 km), while the 4Matich goes 285 miles (459 km) between charges.

The base rear-drive EQE makes 288 horsepower and 391 lb-ft of torque from its sole electric motor and while horsepower remains the same in the two-motor 4Matic, torque is bumped up to 564 lb-ft. Figures for the eventual range-topping 500 4Matic have yet to be announced.

The touchscreen-reliant control strategy is supplemented with rather small redundant controls on the steering wheel. Some of them have touch surfaces that require you to slide your finger back and forth for the desired result. There’s not much tactile satisfaction you get from using traditional analog controls. And despite Mercedes’ goal of having transparent “zero layer” interaction with most functions readily available on the touch screen, there is some rummaging around in the menu to control features like the ambient lighting. At least you get some assist from the MBUX user interface with its “Hey Mercedes” assist that can handle many rudimentary operations. 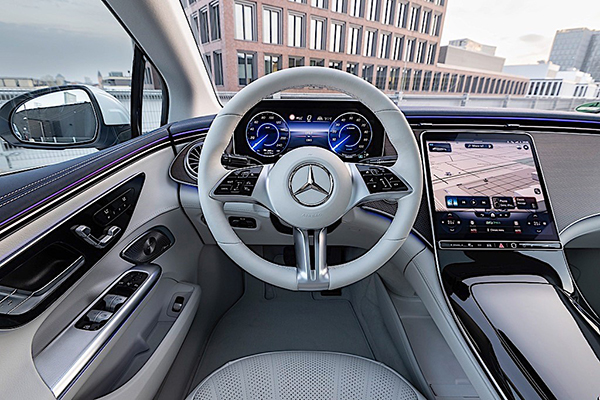 As for the driving experience, Mercedes-Benz redefined the luxury car experience by offering engaging vehicle response with a comfortable ride. In its new electric world, the emphasis seems to be more on the latter than the former. The car is swift, secure and silent, but its suspension setup does little to encourage a spirited approach to tackling the road ahead.

One thing the EQE does deliver is an ability to control the regenerative braking, (excuse us, “recuperation” as it’s referred to in Mercedes-speak). This feature can be toggled through a range from minimal to maximum with one-pedal capability at the high end. Overall, the EQE is roomier and more serene at highway speeds than its gas-powered E-Class counterpart.

Despite all the innovative tech, composed ride and luxury amenities, the shift to EV powertrain seems to have sapped a bit of the spirit we’ve come to appreciate in Mercedes sedans. That said, those who miss that feeling may be old-school analog drivers trying to adapt to a digital world.