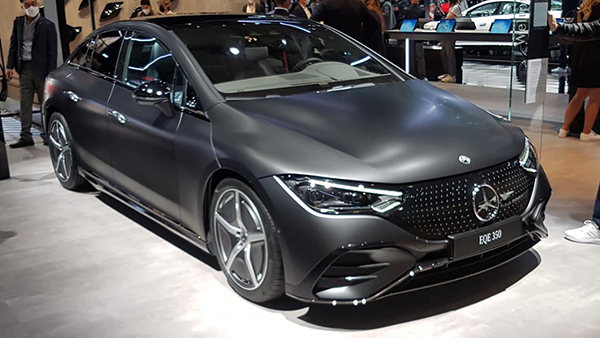 This is the Mercedes EQE – an all-electric counterpart to the E-Class saloon and the second model in Mercedes’ all-electric EQ line-up to be based on a purpose-made electric car platform.

It’s a smaller sibling for the brand’s EQS large luxury saloon, and the first in a trio of all-electric executive saloons planned by the big three German premium manufacturers, beating the upcoming Audi A6 e-tron and the electric version of the next-generation BMW 5 Series to production-ready status.

Like the EQS, the EQE makes use of the brand’s EVA2 platform. It will be built at the firm’s largest factory in Bremen from mid-2022 onwards, with additional production in China for the Chinese market. 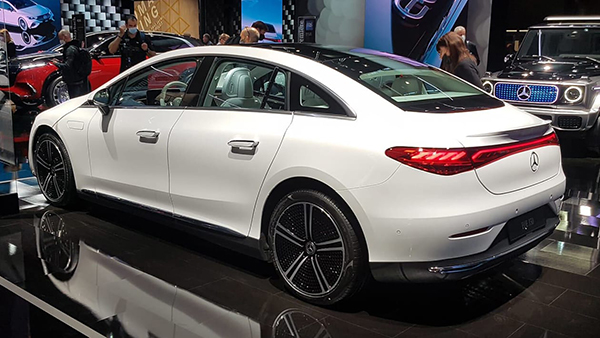 New Mercedes EQE: exterior design and chassis
It’s ever so slightly longer, wider and taller than the E-Class saloon, while its wheelbase of 3,120mm is longer than even the China-only E-Class Long Wheelbase model.

These dimensions, coupled with the streamlined, almost four-door-coupe-like design, mean that the EQE is more similar in profile to the CLS than the E-Class saloon. The overhangs are kept shorter than on the EQS, with wheels sized from 19 to 21 inches available.

It takes plenty of design inspiration from its larger EQS sibling, integrating a similar front-end design, with a large black panel in place of the grille. Behind this fascia sits the various sensors and cameras required for the car’s driver assistance features. The bonnet is fixed in place and designed to be opened only by Mercedes mechanics at a service, with an access flap for washer fluid integrated into the left wing.

At the rear, a traditional saloon boot lid is headlined by a full-width LED tail-light bar and a small integrated lip spoiler. Items such as the car’s aerials are hidden underneath the bodywork, and the reversing camera is placed beneath the rear badge.

As standard, the EQE rides on steel-spring suspension, but adaptive air suspension is optional, as is the four-wheel steering system used on the EQS. 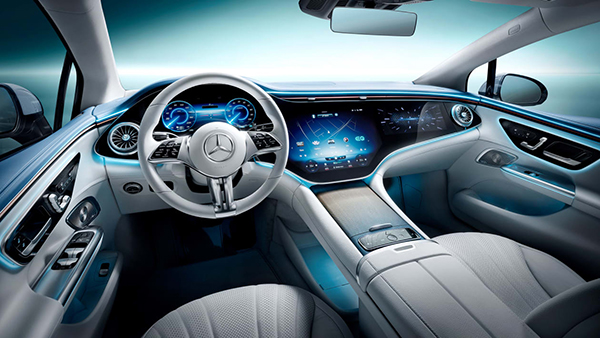 New Mercedes EQE: interior design and infotainment
Inside, it takes heavy inspiration from the larger EQS. In fact, the dashboard is near-identical when the EQE is optioned with the MBUX Hyperscreen system – a full-width OLED display encompassing the entire surface area of the dashboard with three interactive display areas.

The digital dash comprises a 12.3-inch area behind the steering wheel, while on the other side of the dashboard is another 12.3-inch display with touchscreen functionality for the passenger. The central area of the Hyperscreen system measures up at 17.7 inches. They all blend together to look like one seamless unit.

The entry-level version of the EQE will come without the Hyperscreen system. In its place will be a ‘slightly different’ centre console, but no images of this different infotainment set-up have been revealed. 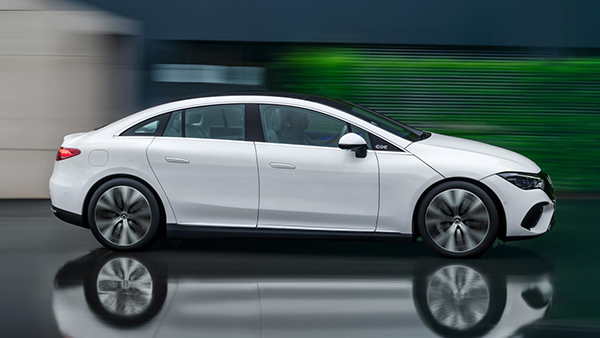 New Mercedes EQE: battery, drivetrain and performance
Mercedes says that two variants will be available from launch and that 4MATIC versions are coming, and it’s not hard to imagine the arrival of AMG versions in the future too. But for now, the brand has detailed just one version, the EQE 350.

The EQE 350’s battery has a usable energy content of 90kWh. An electric motor system is mounted on the rear axle, developing 288bhp and 530Nm of torque, and while Mercedes has not issued any performance figures, it has said that pending final WLTP homologation a range of up to 410 miles on a single charge is possible.