The EQE feels like a logical all-electric counterpart to Mercedes’ E-Class saloon. The genuinely impressive range is the EQE’s trump card, which is good, because charging rates could be faster. However, it offers enough performance, a mostly comfortable ride, sound refinement and super technology, which means the EQE is a pricey but appealing premium EV. 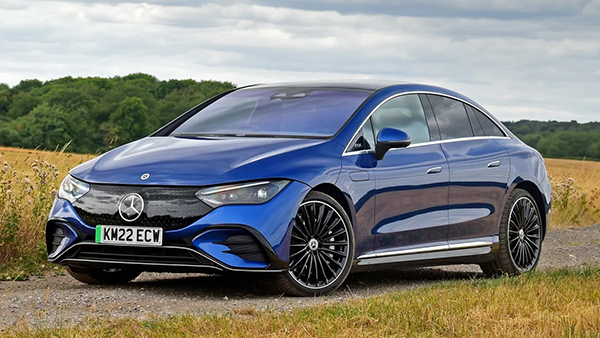 Not long ago, if you wanted a premium electric saloon, the Tesla Model S was your only option. However, Tesla doesn’t currently sell its executive car in the UK, while its rivals have caught up – and this Mercedes EQE is an appealing all-rounder.

It’s based on the firm’s EVA platform, which also underpins the larger EQS, and this EQE features a 90kWh battery slotted within its still-considerable wheelbase. The EQE offers up to 394 miles of range, with this EQE 350+ model in AMG Line Premium Plus trim serving up a claimed 356 miles.

Our car showed a predicted 327 miles at just under 100 per cent charge, and by 50 per cent capacity, it was still on track for more than 300 miles from a full charge, which is an impressive showing. 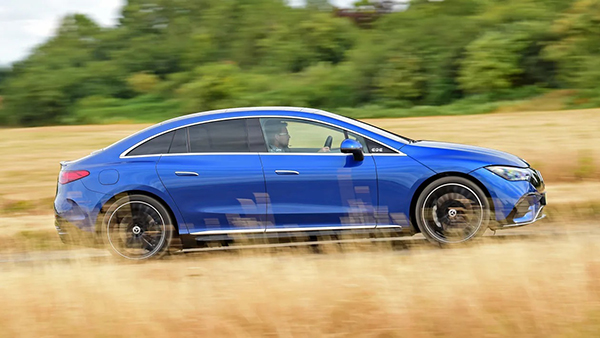 Standard 170kW charging means it’s down on rivals such as the Porsche Taycan and Audi e-tron GT – not to mention Tesla – but a 10-80 per cent top-up will take 32 minutes, which isn’t too much of a hurdle.

The EQE’s straight-line performance isn’t Tesla-fast or what we’re used to from the sharpest electric saloons. But it still has 565Nm of torque, while its ICE E 220 d counterpart only offers 440Nm, so there’s more than enough mid-speed flexibility, and powertrain refinement is in a different league in the EQE. It’s very quiet on the move.

Officially, the 0-62mph sprint takes 6.4 seconds and the Mercedes is more than quick enough for pretty much any day-to-day situation. It does feel heavy, but the zip from the single rear-mounted motor allows you to use the performance in bursts whenever you need it. 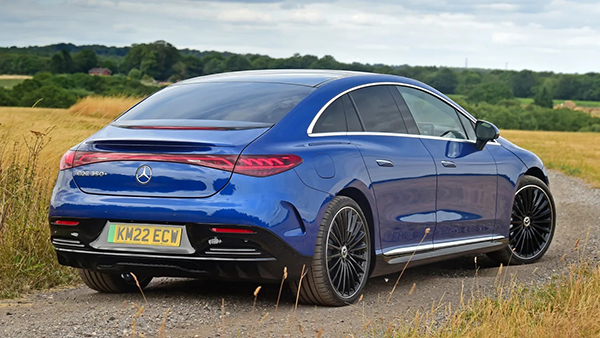 The EQE’s high 2,355kg kerbweight means it’s not a driver’s car, though. On country roads, the chassis struggles to contain more aggressive ruptures and ridges in the tarmac, and the car feels weighty and big. The feeling is made worse by the swooping bonnet, which is invisible from the driver’s seat and means it can be hard to get an idea for where the nose is when you’re manoeuvring.

On smoother surfaces the sometimes soft-feeling air-sprung set-up allows a lovely level of float, so the EQE delivers a relatively soothing ride and supreme refinement on the motorway, for example.

It’s best to play to the EQE’s strengths, keep the pace leisurely and enjoy the qualities it can deliver on this front. 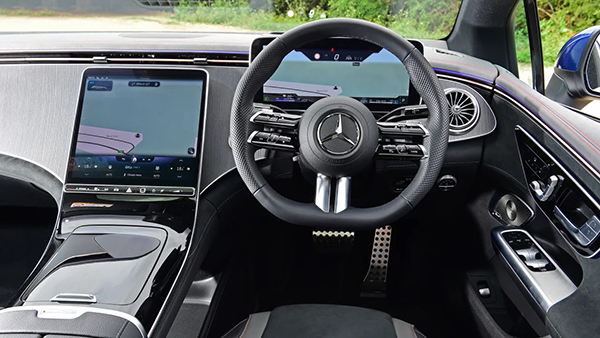 The adjustable regenerative braking helps here, too. There are four modes – off, low, high and intelligent – with ‘high’ allowing one-pedal driving.

The retardation is strong and intuitive, with the ‘intelligent’ setting adapting to road conditions to the point that you almost don’t notice it happening. However, the brake pedal moves on its own as the system works, so it can sometimes feel a little odd when you apply the brakes, with a small step as the systems work together.

The EQE has loads of tech and the rest is integrated well. The 55.5-inch full-width Hyperscreen option wasn’t fitted to our car. The standard 12.8-inch set-up is similar to what’s in the S-Class and is solid, with strong connectivity (wireless Apple CarPlay and Android Auto, plus lots of info on charging points etc), great graphics and super-fast responses. It’s one of the best and simplest systems on sale and is joined by a super-clear digital driver display. 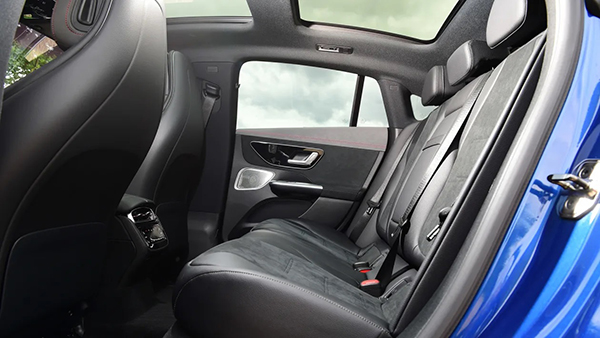 However, because the Hyperscreen spans the full width of the dash, our set-up leaves a large slab of plain material in front of the passenger. The quality is disappointing; there are some harder surfaces and our car had one or two rattles, but the alternative fabrics and trims feel premium, which is just as well given the EQE’s price.

The 350+ line-up starts from £76,450, with our AMG Line Premium Plus car coming in at £88,450. Along with this trim’s sportier styling (including 21-inch wheels), a head-up display, 360-degree camera, keyless go, heated seats, Mercedes’ Digital Light LED headlights, wireless phone charging, lots of driver-assistance tech and augmented reality sat-nav are all included.

There’s plenty of space inside, with lots of legroom and sound headroom in the rear, thanks to the almost bucket-style sculpted rear seats; the 430-litre boot could be bigger though, even if it’s a good shape.