During the Industry Pool at the Nürburgring I have filmed the 2023 Mercedes E-Class testing on and around the track. The spy video above provides a close look at the upcoming sedan’s details. The LED daytime running lights above double as turn signals, while it looks like the headlights wrap around the corners despite being hidden under wraps. The grille and front badge are disguised for now, though we can expect some air inlets on the lower bumper, also hiding under the camouflage. The black alloys look generic, though, so we’re not expecting this set on the production model.

The executive sedan from the three-pointed star brand has returned to the limelight, as it was caught doing its thing at the Nurburgring and driving next to the famous German racetrack.

Still dressed in heavy camouflage, the prototypes turned out to be apex devourers at the circuit, proving that besides taking its occupants to and fro in relative luxury, the model will also be very agile. The fun-to-drive car does need good driving dynamics, as it will go up against the Audi A6 and BMW 5 Series, and both its rivals are more than capable of sending sporty vibes.

Its overall styling won’t impress anyone, as it will look like an evolution of the current one, or like a bigger C-Class or smaller S-Class, if you will. It gets flush-mounted door handles, new signature for the sweptback headlights, different grille, fresh taillights, and similar overall proportions. The Russian doll design will be noticeable, as from certain angles, it will be quite hard to tell it apart from its smaller and larger brethren. 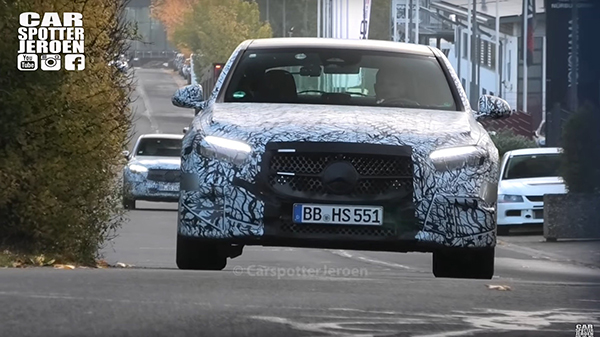 The same goes for the cockpit too, previous spy shots and leaks have revealed, as the 2024 E-Class will feature a very similar dashboard panel, with a large screen incorporated in the middle. The new steering wheel has a three-spoke design, and behind it sits another display that will be the digital instrument cluster with a tablet-like shape.

Based on the MRA II platform, recent reports indicate, it is understood to launch with 2.0-liter and 3.0-liter engines, some of which, or perhaps all, sporting electric assistance. It is possible that those living in Europe will still get the chance to order the new E-Class with a diesel unit, too, as these mills are still popular over there. The Affalterbach brand, namely AMG, will still have its way with it, with a variety of models bearing their signature, including the 63, which could get the S E Performance suffix as a result of it going down the electrified route.

Set to replace the W213, aka the fifth-generation Mercedes-Benz E-Class, which is more than six years old, the all-new E-Class that is known as the W214 is expected to be a few months away from its official unveiling. Chances are that it will hit the assembly line in the second half of 2023, which would make it a 2024 model in the U.S. of A. However, contradicting reports claim that it could actually debut in early 2024, but we’re not so sure about that.