ABANDONED BARN FIND First Wash In 30 Years Mercedes 190C! Satisfying Car Detailing Restoration. Today, we tackle the interior & exterior of a Mercedes 190C that is covered in dirt & debris that hasn’t been washed in over 30 years that will require us to pressure wash the entire exterior, followed by a wash, clay bar and then polishing the paint to bring back its shine followed by a full interior detail which included mold removal.

The Mercedes-Benz you’re looking at is known as the W110, but some also call it a Fintail (or Heckflosse in German). It replaced the W120 “Ponton” in 1961 and remained in production until the equally iconic W115 arrived in 1968.

The footage below doesn’t include info about the car’s model year, but the 190C model designation suggests it’s part of the first (pre-facelift) series built from 1961 to 1965. As do the turn signals mounted high on the front fenders. This one’s powered by a gasoline 1.9-liter inline-four (codenamed M121), but Mercedes also offered a 2.0-liter diesel.

The facelift saw the 1.9-liter gas mill go into the history books, replaced by a slightly bigger 2.0-liter version. But Mercedes also introduced a 2.3-liter inline-six. The diesel engine remained on offer until 1968. 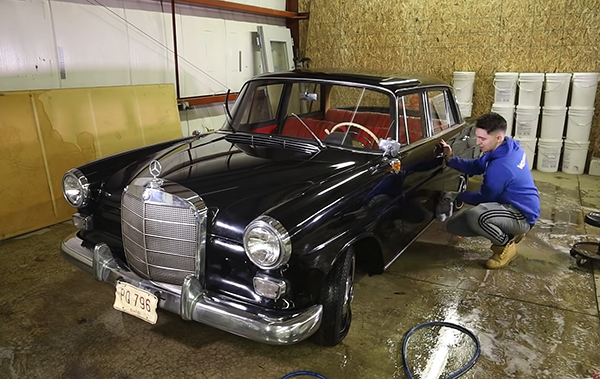 So what’s the story of this W110? Well, we don’t know much about it beyond the fact that the current owner brought it to WD Detailing for its first wash in 30 years. Three decades of storage is a lot for any car, but this Merc took it really well and, apart from the flat tires and the dust, it looks just like the day it was parked in the early 1990s.

And the cleaning process reveals a solid bodywork, shiny chrome trim, and a nice interior with bright red upholstery. Sure, this W110 is far from perfect, but for a survivor that spent 30 years off the road, it’s in fantastic shape.

We don’t know if the old four-banger is running, but it’s safe to assume that it doesn’t. However, knowing how solid these engines are, it should come back to life with just a bit of work.

Enjoy one of the most satisfying first wash videos I’ve seen in a very long time by hitting the play button below and let’s hope that this W110 will get back on the road sooner than later.