This Rare 1991 Mercedes Benz 250TD gets its first wash in 10 years and a full disaster detail in preparation to sell on the MB Market. I fly down to Myrtle Beach to meet with Rusty from Diamond Back Classic Tires who gives us a tour of their amazing facility. After we learn about the manufacturing process of whitewalls, we check out the 250TD and 300CD which both need a lot of love to get back on the road. I strike a deal to clean up both of these beloved Benzes and get them to a new home. Back at the AMMO Studio, it’s an intensive detail to get the 250TD ready for it’s auction on the MB Market. The before and after is totally worth it as the 250TD cleans up very nice especially the rare Recaro Interior. Some amazing before and afters on the paint as well. Super excited to get this 250TD back on the road with a new owner.

Mercedes-Benz built two and a half million models of the 124 series over this model’s career, including all its body styles, and the Bruno Sacco design has aged beautifully.

This example is a 1991 model year vehicle originally sold in Europe, and it is a 250 TD with a manual gearbox, which makes it a rare configuration in the American market today, not to mention the fact that it was an estate, or T-Modell, as Mercedes-Benz likes to call these.

The owner of this example has passed away, but his car will live again once Larry Kosilla does his magic in his studio. While the vehicle was kept in a storage facility for the last ten years, doing so has not stopped various animals from entering it.

As Larry quickly notes, there are all kinds of spiders under the hood, as well as inside, complete with white mold, rat prints, and other less-than-fortunate signs that critters have been there.

If you have a vehicle that is close to this one when animal contamination is concerned, wearing personal protective equipment is mandatory, not just recommended, as you might touch something that could make you sick. 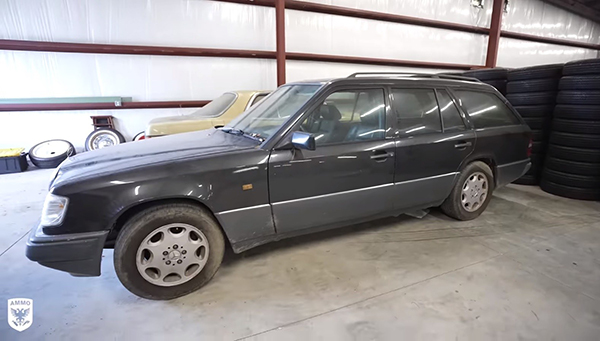 Returning to the stylish black estate with alloy wheels, you can see that someone once loved this car, as was the case with its 300CD sibling that was featured weeks ago. Yes, they had the same owner, and this example also comes back to the used car market and, hopefully, to the road where it belongs.

With a reasonable investment in its drivetrain, suspension, brakes, and steering, this 1991 Mercedes-Benz 250 TD will once again shine as it did three decades ago. Back then, the T-Modell versions, such as this one, had a self-leveling rear suspension with struts instead of shock absorbers that offered improved comfort for the rear occupants.

Mercedes-Benz even offered a seven-seat version of the S124 chassis, which had a rear-facing bench seat in the luggage compartment that could have been folded to leave a flush storage area when it was not in use.

Until 1994, Mercedes-Benz also offered a retractable cargo net for this body style. Its only downside, when compared to a sedan, coupé, or convertible of the W124 generation, is the higher-mounted rear seat squab (the part that you sit on), which robbed the passengers of a fair bit of headroom in comparison to the other body styles.