There have been many racing homologation specials over the years, but few as extreme as the Mercedes-Benz CLK GTR. DK Engineering put together detailed videos showing just how much this barely tamed racer differs from the standard CLK, which was roughly equivalent to today’s E-Class Coupe in the Mercedes lineup of the time.

The CLK GTR race car debuted in 1997 in the FIA GT1 class, the top international class in sports car racing during the late 1990s. The GT1 class was ostensibly for modified production cars, but in reality featured full-on race cars that had road-going variants sold in limited numbers.

Some manufacturers didn’t even go that far. While a few examples of the CLK GTR and Porsche 911 GT1 were actually sold to customers for road use, the rival Nissan R390 GT1 and Toyota GT-One never made it into private hands.

Mercedes aimed to follow the letter of the law as well as its spirit, however, making an attempt to civilize the CLK GTR for street use. It has air conditioning and central locking, for starters, the latter using the same key fob as a normal CLK.

One feature you won’t find on a normal CLK, however, is a built-in fire-suppression system, the controls for which are located behind a panel in the very thick driver’s side sill (DK Engineering recommends arming this before you go for a drive). Sliding over that sill to get into the cockpit is a bit of process. 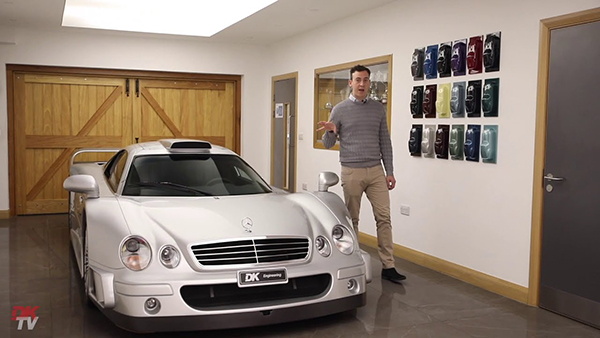 Once inside, that same standard CLK key fires up a mid-mounted 6.0-liter V-12 that produces approximately 600 hp in early cars, but was later upped to around 630 hp. Either way, it produces a glorious sound. Mercedes also built a CLK LM version for the 1998 24 Hours of Le Mans with a 6.0-liter V-8 that was thought to be more durable, but both cars entered suffered engine failures.

Shifting duties are handled by a paddle-shifted 6-speed sequential gearbox that has a few quirks. Unlike modern flappy-paddle gearboxes, it still has a clutch, and the gear indicator light doesn’t always register when a new gear has been selected. Reverse is activated by pulling a lever on the center console.

The bodywork is an aluminum and carbon-fiber honeycomb, with removable front and rear clamshells. Removing the rear clamshell lets you admire that V-12, while the space up front is mostly occupied by the front suspension and some air ducts. Filler ports for fuel, oil, and washer fluid are located in the roof pillars.

Unlike the 911 GT1, the CLK GTR was sold with functional race car-style air jacks. Watch the full video to see them in action, and to learn more details about this marvelous Mercedes.