At Metal Supermarkets, get any metal, any size, cut & ready fast! Browse different shapes of metal through Metal Supermarket’s online store or visit one of their 100 locations across North America.

By now, many have heard about the 24 Hours of Lemons, and if not, it involves racing production cars that have been modified to be adequate for racing, as well as come with a theme. There is one catch, though, and that is the budget for safety improvements. In the case of the latter, there is no cost cap, and all vehicles entered in the race must have a properly-build, weld-in roll cage.

Moreover, nobody can enter the race without an FIA-approved racing seat, racing belts, a racing helmet, and things like a fire suppression system, an electrical cut-off switch within reach of the driver, and so on. Those are all in the rule book for the 24H of Lemons, so no competitor should be surprised about these requirements during scrutinizing.

ChrisFix already has a $500 car that he has prepared for racing, and fellow YouTubers Rich Rebuilds and B is for Build have decided to join in on the fun. The rule for the competition is to prove that the vehicle they have acquired was bought for $500, and if it was acquired for more, it is up to the owner to sell (and to prove that they did) parts off it until that cost cap is reached. 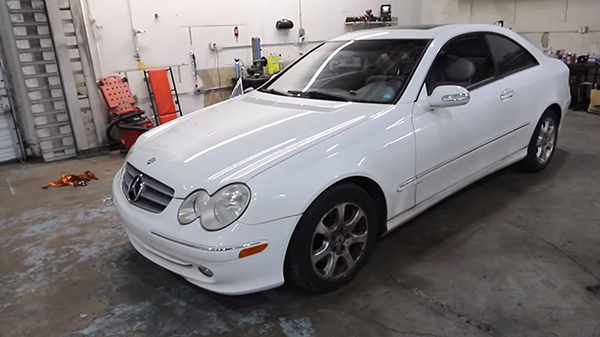 For example, ChrisFix parted out his E46 and filmed when he sold certain parts and the amounts of money that he got for each to demonstrate that he stuck to the rules. The $500 rule means that the scrutineers or officials, among others, can request to buy those vehicles from the competitors at any time, and they will only pay that amount for them. Those who do not agree with that rule will be excluded from the competition.

The goal of the rule is to prevent someone from entering an expensive, purpose-built, racing car into the event as a $500 car just to compete and have a better chance of winning than anyone else. B is for Build selected a 2004 Mercedes-Benz CLK 320 C, which was acquired at auction.

Since they paid more for the car than the cost cap, they must sell parts off it to bring its cost down. Otherwise, they need to take penalty laps, but it would ruin their result. Selling their interior parts, such as the leather interior, door cards, and more, would help them in that direction.

You can watch them in action in the video below to learn what it is like to get a flooded car at auction and then attempt to turn it into a $500 racecar.