The Mercedes-Benz CLK GTR is one of the most remarkable road cars ever produced and with just 28 units in existence (including two prototypes), one of the rarest as well.

When first introduced, it had a price tag of just over $1.5 million, making it inaccessible to anyone other than the wealthy few. However, one enthusiast decided to create his own version of the CLK GTR… on a budget.

This replica was recently snapped at a parking lot in the U.S. and shared on Reddit. It appears to be on a W210-generation E-Class and been adorned with a bodywork that tries to mimic that of the actual CLK GTR. 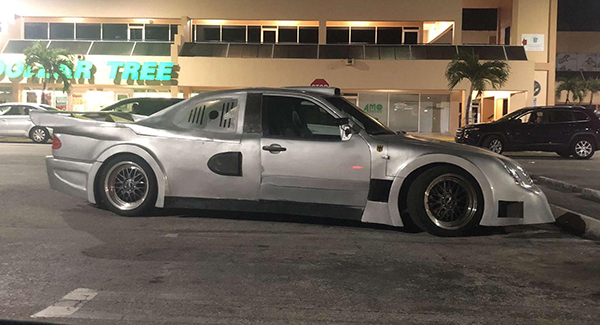 Up front, the car features a bumper inspired by the CLK GTR that includes cut-outs on the sides mimicking the actual car’s air vents. Elsewhere, the car has been equipped with multi-spoke wheels and a set of extended side skirts.

Perhaps the most significant changes have been made to the rear half of the car, where the rear doors have been either removed or covered and replaced with faux air intakes. There’s also an elongated tail much like the race car-derived CLK GTR, including a large wing, while rounding off the modifications are aftermarket mirrors and a roof scoop.