At the Supercar Driver Secret Meet 2022, there were an incredible selection of rare Mercedes-Benz, especially AMG models, on display. The highlights for me however were brought along by German supercar dealer Mechatronik- and included the legendary Le Mans homologated Mercedes CLK GTR, 1 of 1 in blue, the SL65 AMG Black Series, also incredibly rare in blue, the SLR McLaren Stirling Moss, and even a one-off track version of the CLK63 AMG Black Series. Just incredible!

Born due to FIA regulations that required at least 25 road-going cars for homologation, the CLK GTR arrived in street-legal form in 1998. And it took the streets by storm with an even larger V12, as displacement was increased from 6.0 to 6.9 liters. Rated at 604 horsepower and 572 pound-feet (775 Nm) of torque, it was one of the most powerful production cars available at the time.

But some CLK GTRs came with an even bigger 7.3-liter V12 under their hoods. Already available in the Pagani Zonda and the SL 73 AMG, the mill sent 711 horses and 580 pound-feet (786 Nm) of twist to the rear wheels. Only five of these Super Sport models were built by H.W.A., the same company that built the CLK GTR Roadster.

In all, only 28 cars were produced, including two prototypes, 20 coupes, and six roadsters. Needless to say, the drop-top is the rarest when it comes to body style, but there’s one coupe that’s not only unique but also a mysterious supercar that rarely comes out of storage. 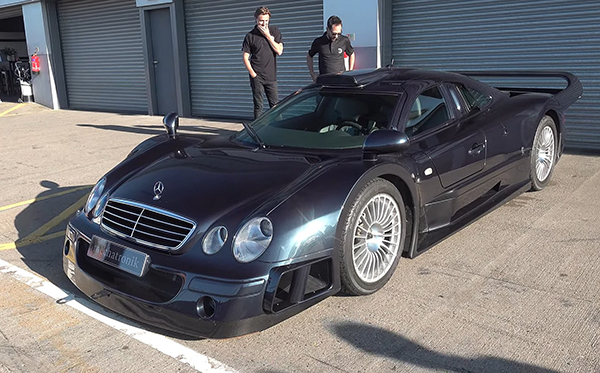 I’m talking about chassis number #19, a CLK GTR that’s unique because it’s the only one finished in dark blue metallic. It’s also one of the only five cars that got the Super Sport package with the larger 7.3-liter V12.

And while the CLK GTR itself is a rare sight, this blue wonder is widely regarded as the most mysterious version of them all. Simply because it rarely comes out of storage. The last time we saw it, back in September 2021, the supercar had been in hiding for a whopping 15 years.

Some 10 months later and the blue CLK GTR was taken out of its heated garage again, this time around for the Super Driver Secret Meet 2022. Part of the German-based Mechatronik collection, the one-of-one supercar was showcased at the Donnington Park Circuit among the rarest and most expensive hypercars out there.