With Monterey Car Week taking place just a few days ago, it wasn’t uncommon to see priceless vehicles roaming about the area. A Mercedes-Benz CLK GTR for example, wouldn’t be totally out of the question. This one found on Reddit, while it is in Florida on the other side of the country, might technically be even rarer than the real thing, as it’s likely the only one in existence – although that would be for the best… 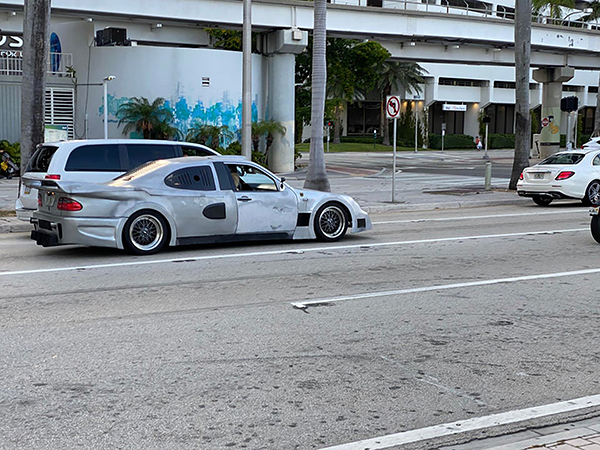 We’ve actually featured this creation before, only now it has its rear side “windows” painted black instead of silver. The underlying car appears to be a W210 E-Class, the four-door sedan version of the car the real CLK GTR was based on. As such, it has the same headlights, taillights, and grille as the real car, and the rear doors have either been sealed off or welded shut. Beyond that, though, things start to get messy.

The bumpers and spoiler roughly resemble those of the real CLK GTR, but whoever built this creation curiously removed the body side molding strips, which were not only already on the donor car, but also a part of the real CLK GTR as well. Additionally, there have been vents added in places where vents don’t need to be, such as in the middle of the rear “door”, on the sides of the rear bumper, and on those now-black rear side “windows”.

There’s also a roof scoop, but it’s not feeding anything considering this car’s engine is in the front. The same could be said for all the venting around the rear doors, windows, and bumper, as the only thing behind the driver in this CLK GTR is an unusable rear seat area and a likely non-functioning trunk. In all honesty, though, if they fixed the unusual middle section and gave the car a new coat of paint, it might still not fool anyone into believing it’s the real thing, but at least it wouldn’t be that bad.