The second-gen Mercedes-Benz CLK-Class went on sale for the 2003 model year in the US, and the CLK 500 was the top non-AMG variant at launch with a 5.0-liter V8 making 302 horsepower (225 kilowatts) and 339 pound-feet (460 Newton-meters) of torque. In this video, the V8-powered coupe takes a high-speed blast down the autobahn.

The driver makes this run late in the day, and the sun is setting during the later part of the clip. Traffic is light, and this lets the driver remain above 200 kph (124 mph) and even extended driving in excess of 240 kph (149 mph).

During the first section of the video, there’s a glare on the speedometer that makes the velocity difficult to see. Judging by the position of the needle on the gauge, the car is doing over 250 kph (155 mph). 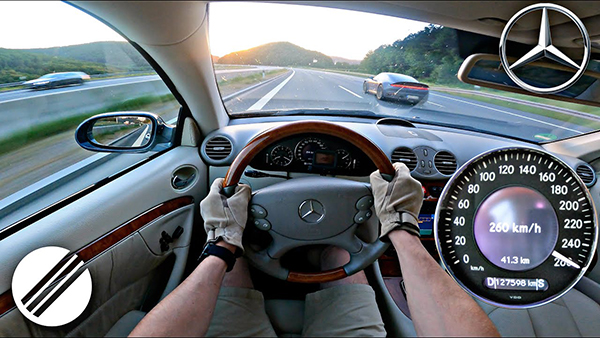 In the second part of the clip, the driver goes for another run. This time the speedometer reaches the maximum 260 kph (162 mph) a few times. The vehicle’s performance still seems effortless at these very high speeds. It seems like Mercedes engineered the CLK specifically for this purpose, given how easy things looked in this clip.