As an unofficial coupe version of the C-Class built atop its old platform, and bearing the E-Class styling (and priced in between the two), the CLK-Class is nothing short of special and resides in its own segment. Despite being killed off in 2009 with the introduction of the E-Class coupe and cabriolet, the CLK remained in the hearts of true Merc fans even after a decade of its absence.

Probably the most special CLKs of all time is the CLK 63 AMG Black Series, which was produced towards the end of the nameplate’s lifeline.

With only 500 units produced – over 300 of which went to the United States – the CLK 63 AMG Black Series’ rarity is considered, and that makes the video embedded atop even more infuriating. 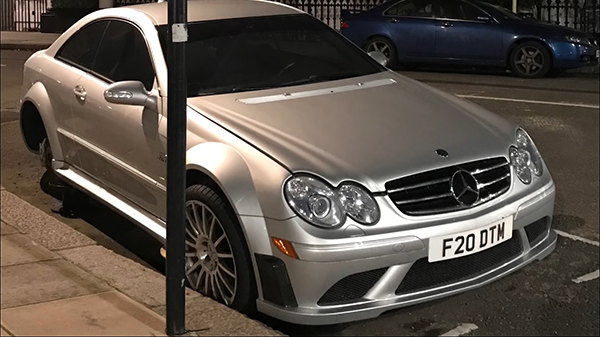 Shot in London and uploaded by YouTube’s Much997, thieves tried to steal the wheels off of one CLK 63 AMG Black Series. They were able to ransack the two rear wheels, leaving the poor coupe standing on bricks at the back portion. While the front wheels are still there (along with the jack stand), it seems like something happened while the thieves are in action – thankfully, I guess.

But ultimately, this one (out of 500) CLK 63 AMG Black Series got vandalized and disrespected, something that it doesn’t deserve.

On a positive note, at least it wasn’t stolen completely and the small-time heist wasn’t completed. We’re not sure whether the culprits of the crime we’ve seen above have been caught at the time of this writing, but we sure do hope they do get what they deserve.

Stealing is a crime, full stop. These scums should answer to the law and be put to justice.