Plenty of people remain sceptical about plug-in hybrids, but improvements in tech mean that this type of car is increasingly able to back up its undoubted company-car tax benefits with proper reductions in real-world running costs. And we feel there’s no better example of this than the Mercedes C 300 e. 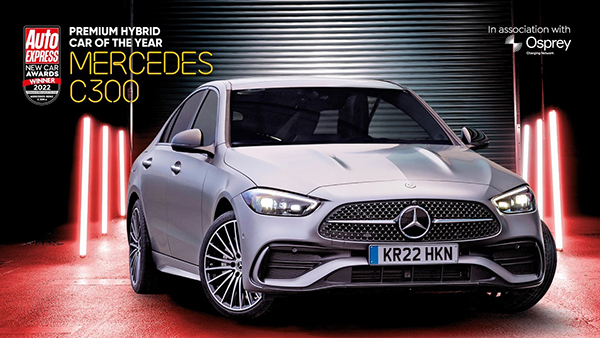 Put simply, this feels like the least compromised plug-in hybrid that we’ve ever driven. It comes with a whopping 25.4kWh battery – larger than the set-up in the original Nissan Leaf EV – plus a 128bhp electric motor that has more than enough shove to carry a C-Class saloon by itself, and a 2.0-litre petrol engine for when you need maximum pace or want to go beyond the car’s pure-electric range.

Speaking of which, the C 300 e can manage up to a claimed 68 miles on EV power alone – and during our real-world tests, we managed a still-impressive 60 miles. That’s a proper commute-friendly distance and is the sort of range where many will be able to plug in on a Sunday night and then not worry too much about using a drop of fuel for most of the following week.

The rest of the C-Class package remains as appealing as ever, despite a slight hit in boot capacity. There’s a still-usable 315 litres of load space, along with a beautiful infotainment set-up with an 11.9-inch portrait-layout touchscreen.

While the C 300 e’s pace and efficiency should appeal to private customers, it’s company car choosers who will really reap the rewards of the PHEV model, thanks to the current BiK tax regime. It falls into the eight-per-cent category, so it could save higher-rate taxpayers more than £3,500 per year compared with a similarly specced diesel variant.

Mercedes C 300 e AMG Line Premium (£49,060)
The technology doesn’t stop at the hybrid powertrain – the C 300 e AMG Line Premium is packed with gizmos inside. That gorgeous touchscreen features a 360-degree parking camera, while the premium navigation system gets augmented reality instructions. In other words, there’s an awful lot of kit packed into that sub-£50,000 asking price.

BMW 530e
The larger of BMW’s plug-in hybrid saloons can’t quite match the C-Class’s pure-electric range, but the 530e can still muster up to 37 miles without needing to fire up its engine. Plug it in regularly and you’ll have a cheap-to-run, premium-feeling saloon that’s every bit as good as other 5 Series variants to drive.

Lexus NX
Lexus has been chipping away at the driveability of its core hybrid systems and that really comes home to roost with the NX, which is now one of the best offerings in its class. The 2.5-litre petrol-based powertrain is powerful and relaxing to drive, and a pure-electric range of more than 40 miles means BiK tax starts at eight per cent.