Earlier this week I read about Dragon Ball Z creator, Akira Toriyama being a gearhead. In one of his comic chapter, Toriyama illustrated the Mercedes-Benz 190E-based motorcycle hauler. Inspired by that illustration, I rendered this Mercedes-Benz 190E Ute, along with a version with Master Roshi’s liveries.

So, what does that have to do with Dragon Ball, the Japanese media franchise created by Akira Toriyama in 1984? Well, nothing, if you ask most automotive enthusiasts, even if some of them are secretly (or not) big anime fans, as well. But there is at least one major exception.

That would be the virtual artist better known as Theottle on social media, who still decided to tempt our imagination with the illogical assumption that Mercedes has anything to do with manga. And believe it or not, there is also a sensible explanation as to why an unsuspecting, gray Mercedes 190 E (it does look kind of like an Evo, right?) has morphed not only into a Ute-style pickup truck but also a versicolored one! 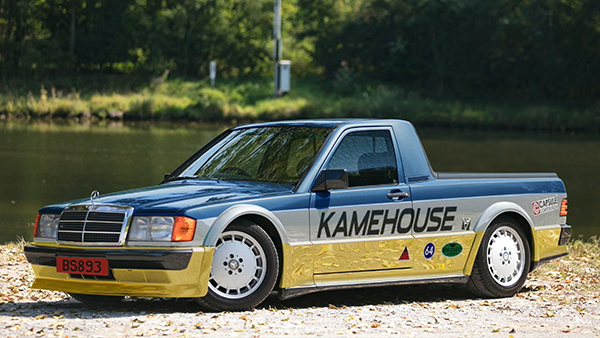 The pixel master says that his imagination was triggered and began to run rampant when “earlier this week I read about Dragon Ball Z creator, Akira Toriyama, (also) being a gearhead.” Then unbelievably, the CGI expert also found the “real” inflection point as in “one of his comic chapters, Toriyama illustrated a Mercedes-Benz 190 E-based motorcycle hauler.” As such, inspiration quickly struck to the point of seeing a “normal” Mercedes-Benz 190 E Evolution Ute, a cheerfully colorful variant, as well as a fully-fledged version “with Master Roshi’s liveries.”

Now, while 190 E Evolution (both I and II) diehard fans might be appalled at seeing something like this being based on their beloved high-performance sedans, we must take the silver lining of it and see it being made all in good CGI sport. Besides, a 190 E Ute looks goofy yet cool when draped in yellow, silver, and blue – though I am not necessarily leaning towards also adding the virtual stickers if I had to vote a hero interpretation.