The numbers alone sell the C 300 e, but the latest C-Class is a lovely car, too; strong on tech, comfortable and spacious, and with the expected refinement and excellent running costs for this PHEV. This model will please private buyers who’ll enjoy the electric range of around 60 miles, while it could just about be the best company car you can currently buy thanks in no small part to the huge tax savings.

Plug-in hybrids have long been the go-to choice of company car drivers searching for big tax savings, but this new Mercedes C 300 e could prove just as popular with private buyers.

As is usual with PHEVs, it’s all about the numbers, and this latest C-Class claims CO2 emissions as low as 14g/km, average fuel economy of 404mpg (yes, really) and, here’s the crucial bit, all electric running for up to 62 miles – more than double what most PHEVs will manage.

That means mega-savings when it comes to company car tax – literally in the thousands of pounds per year thanks to a 7 per cent tax charge for the next tax year (versus 28 per cent for a C 220 d), but also less frequent visits to the fuel pumps. 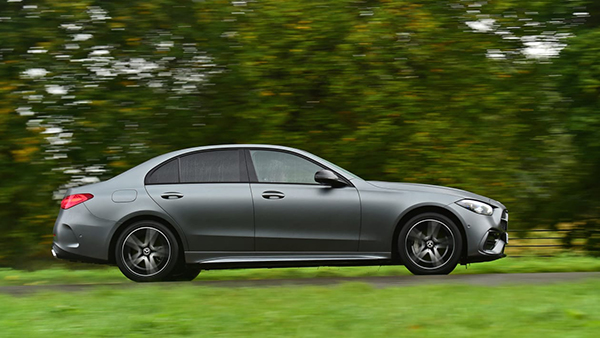 The recipe behind all that sees a 201bhp 2.0-litre four-cylinder turbocharged petrol engine (a diesel PHEV is coming, too) combine with a 127bhp electric motor that is fed by a 25.4kWh battery – bigger than that in the original Nissan Leaf EV.

There’s an additional trick up the C 300 e’s sleeve in the form of fast charging – for a PHEV, at least – at a rate of up to 55kW. A 100 per cent charge should take around half an hour, then you’re off for another 60-plus miles of electric driving.

All that features in what is an impressive new C-Class, a car with more than a nod to the latest range-topping S-Class, not only in the way it looks, but also the tech on board. 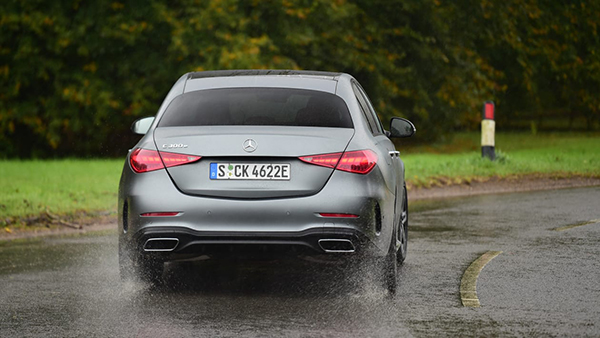 Swing open the front door and you’re greeted by what is now a traditional Mercedes cabin, dominated by a brilliantly responsive 11.9-inch portrait central screen and five oval metallic air vents that add an industrial-chic feel.

The quality of materials feels as good as that in the S-Class, although that’s as much a slight on Mercedes’ range-topper as a compliment to the C-Class, and the whole design seems busier and less minimalist than many rivals but is, at least, cohesive.

Our test car was the AMG Line model, with a slightly sporty look to it and a decent roster of equipment, with that central screen that displays Apple CarPlay and Android Auto bigger and better than rivals. Our car is expected to start from just under £45,000 with yet-to-be-confirmed steps up for AMG Line Premium and AMG Line Premium Plus trims, plus the forthcoming estate version. 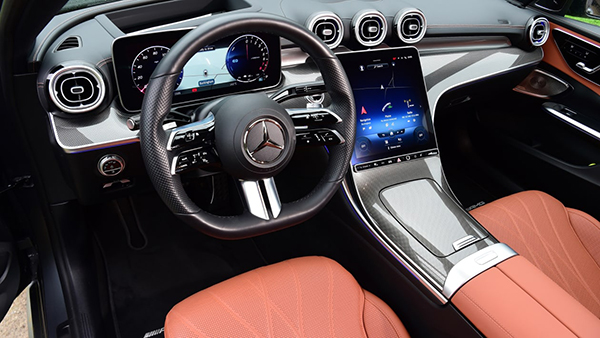 Prodding the start button brings the C 300 e to life but won’t start the engine. Leave the car in hybrid mode and, assuming there’s enough power in the battery, you’ll move off under electric power swiftly and silently.

With that range of around 60 miles – which seemed eminently realistic on our test – the chances are you’ll spend lots of time being propelled by the electric motor. Even when the battery is depleted, the car runs as a full hybrid, complete with regenerative braking to send energy back to the battery.

However, the brake feel isn’t the most consistent we’ve felt in a PHEV, but they’re good enough. And that really sums up the dynamics of the car perfectly. The ride, for example; it’s best described as ‘communicative’, so a little bumpy but not uncomfortable – and that’s on the smaller 18-inch wheels and bigger tyres of the AMG Line model. Similarly, the steering – don’t expect BMW levels of feel and you won’t be disappointed.

As well as Hybrid mode, which we suspect will do most people just fine, you can choose from all-electric mode or one that maintains battery charge for when you need it most.

There’s also Sport mode – although being honest, the car never feels really sporty other than in a straight line. Selecting Sport instantly fires up the engine and tweaks steering and throttle response.

With the hybrid assistance, acceleration is impressive in Sport. But if you ask for a little more go in Hybrid mode the nine-speed gearbox (otherwise super-smooth), electric motor and engine get a bit flummoxed before realising it’s more power you want, dropping a gear or two and getting the engine on song. 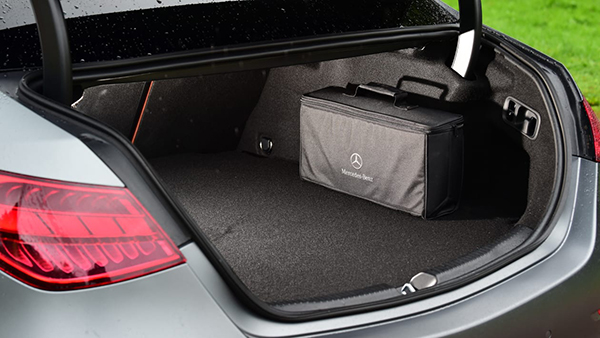 That’s really the only time you’ll hear the engine. When it does cut in and on a longer cruise when battery power’s gone, it’s just a faint hum in the background that’ll be more than likely imperceptible if you have the audio system on – and in the case of this car it was an impressive Burmester hi-fi.

As well as your smartphone connections, you can use the C-Class’s ‘Hey Mercedes’ voice assistant to control most functions, which now includes integrated Spotify, Amazon Music and now Apple Music, too. It’s one of the better systems and means you won’t need to take your eyes off the road to even adjust the temperature. It’s likely to get better, too, with over-the-air updates available.

That sizeable battery doesn’t impinge on passenger space at all – the C-Class remains the comfort benchmark inside with nicely supportive seats and more head, leg and elbow room than in the old model.

The battery has to go somewhere, though, and the boot at 315 litres is down 140 litres on the standard car. You wouldn’t really know it, though – it’s plenty big enough with a flat floor at bumper level.