The C 300 e is another model in the C-Class range, alongside the C 220d, that makes a very strong case for making this the most efficient model in the compact executive class. With a superb electric-only range and strong performance from the motor, many drivers could realistically use this as a full EV for the most part. Yet on longer journeys it benefits from its muscular ICE, great comfort and slick cabin tech. 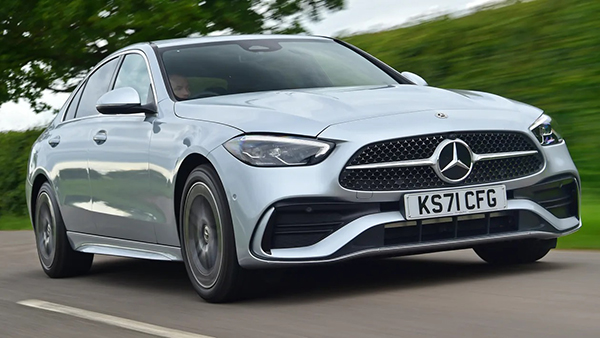 There are many people who might be sceptical about plug-in hybrids. To many, they seem like a halfway house between a standard combustion car and a fully-electric option, without fully reaping the benefits of either.

Like every other fuel – be it petrol, diesel, electric or anything else – there are always concessions to manage. But this Mercedes C 300 e feels like the least compromised PHEV we’ve ever driven.

Many other plug-ins – including the C 300 e’s key rival, the BMW 330e – tend to lack the electric only range to offset the fact that their heavy battery often takes its toll on the ICE unit’s efficiency, leading to an underwhelming mpg figure. Not so the Mercedes. 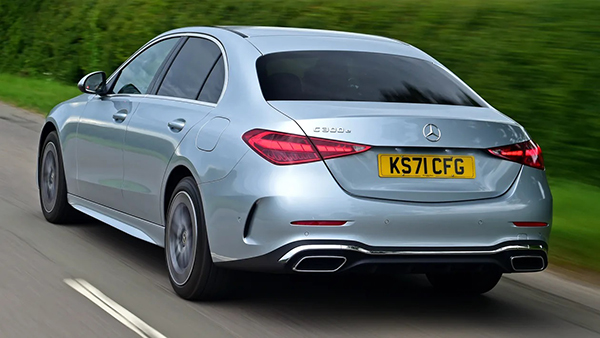 That’s because in the C 300 e’s case there’s a 25.4kWh battery, which is larger than the unit in an original Nissan Leaf. Officially, that means a range of 67-68 miles, but in our hands it delivered a still impressive real-world figure of 60 miles.

The electric motor it’s matched to still has the grunt to get by in most everyday situations, too. On its own, it makes 128bhp and 440Nm of torque, with great response away from the line and more than enough speed to keep up with motorway traffic – all achieved with just a hum of road noise and little else.

Brake regeneration is used to put energy back into the battery when slowing down. Left to its own devices, it does this intelligently, decelerating more when approaching junctions or if traffic slows down ahead. While some will think it’s very clever, it makes the car a little hard to predict; we found by flicking the wheel-mounted paddles, you could also set the brake regen to the more consistent settings of mild and strong, or even switch it off altogether. 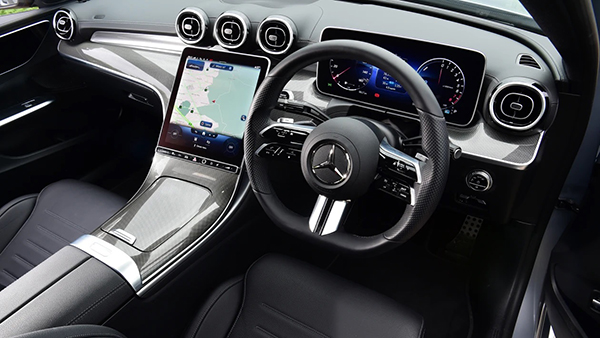 If there’s enough charge in the battery, the C 300 e defaults to EV mode. Switch to hybrid, and heavier presses of the throttle will bring the combustion engine into play. The 2.0-litre petrol makes 201bhp on its own, and results in a combined output of 309bhp and 550Nm of torque. The result is a 0-62mph dash of 6.1 seconds. That’s marginally down on the C 300 petrol (6.0 seconds) and C 300 d diesel (5.7 seconds), but an instant burst of acceleration from the electric motors – not to mention the seamless work carried out by the nine-speed automatic gearbox – makes the hybrid feel like more than a match for the other two.

The key number for the C 330 e is fuel consumption, though. This will vary drastically depending on the sort of driving that you do (and how often you remember to plug it in to charge), but even with longer drives we regularly saw figures in the 60-70mpg range. That’s similar to what we achieved with the less powerful C 220 d – a car which, like-for-like, is only £3,200 cheaper.

But the diesel model doesn’t come close to being in contention when it comes to company car tax rates. With emissions of just 13g/km, the C 300 e falls into the eight per cent Benefit in Kind bracket. That means annual deductions for a higher rate income tax payer of £1,480. By contrast C 220 d drivers would be stuck with deductions of £4,989 from their salary. 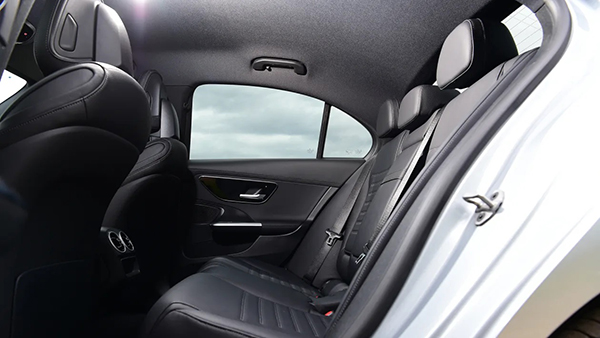 So are there any downsides? It’s a shame that our test car did not have the provision for rapid charging; while the C 300 e is available in some markets with 55kW charging, which replenishes the battery in about 30 minutes, UK cars are Type 2 only. At 11kW you’ll need two hours for a full charge, which limits the potential for zero-emissions running on longer journeys.

The other downside is the braking. As with most plug-in hybrid and fully electric vehicles, the first part of the pedal travel works with the motor regen, with heavier stops aided by the mechanical, friction braking system. That regen part of the pedal here is very long and very soft, giving a feel that initially suggests that the brakes just don’t work. Even with a harder press, they’re still not particularly reassuring, even if they do bring the car to a halt quickly enough.

The need to package the hybrid tech has compromised practicality, too. Due to a raised boot floor, the load capacity drops from the saloon’s usual 455 litres to just 315 litres – and that’s before you factor in the need to keep the charging cables in there, because there’s nowhere else for them to stay, such as underfloor storage. 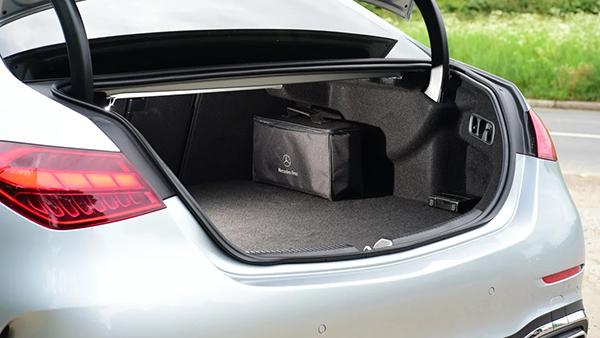 Those points aside, the C 300 e is the same C-Class we’ve come to admire throughout the rest of the range. It’s not quite as sharp to drive as a BMW 3 Series, but it’s impressively stable at speed, and its ride is ever so slightly softer than its German counterpart, particularly on the fairly modest 18-inch alloy wheels of this AMG Line trim.

The brilliant MBUX infotainment system is standard. The portrait-oriented 11.9-inch touchscreen looks sharp, is very responsive, and presents smartphone apps like Apple CarPlay and Android Auto across its entire display. Even the on-screen climate controls are no hardship to use; they’re a permanent fixture, and the keys are large enough to make minor adjustments with barely a glance away from the road.

The rest of the cabin impresses, too. It looks more contemporary than a 3 Series, though the BMW has a tiny bit more headroom in the back.