If you’re still wondering whether the plug-in hybrid is a true alternative to a diesel-powered car, the Mercedes C300e answers that with an emphatic ‘yes’. With battery technology getting ever cleverer, this PHEV Merc boasts some seriously impressive official figures. 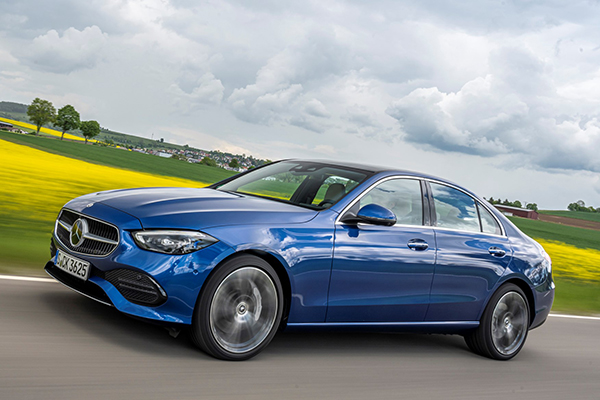 Battery capacity is up from 13.5kWh to a far more serious 25.4kWh, enough to lift range to a WLTP certified 62 miles, far more than the BMW 330e and pretty much every other plug-in out there. Thankfully that doesn’t mean a boot full of batteries, the pack now sits more comfortably under the floor leaving you with a flat load area and more cargo space than its predecessor.

To help you run on electricity as much as possible, the C300e can accept as much as 11kW from a regular AC charger or 55kW from a rapid DC charger. Find the latter and you’ll be able to get to a 100% charge in just 30min. All that adds up to a CO2 figure between just 14 and 24g/km giving a BIK rate of just 7%, 4% below the aforementioned 330e.

But what about the internal combustion side of things?
It’s easy to forget about the dinosaur burning side of things, but the C300e certainly isn’t short of power. The 2.0-litre turbocharged petrol delivers a reasonably stout 201bhp and 236Ib ft, with electrical assistance taking the combined total up to 308bhp and a walloping 406Ib ft of torque.

That’s enough for hot hatch-baiting performance should you decide to forget about economy for a few seconds. A nine-speed automatic gearbox is standard and all that gumption is transferred to the road via the rear wheels only.

Oooh, lots of power and RWD, fun?
Despite the healthy power output the C300e isn’t a particularly entertaining thing, a fact highlighted by the drive there and back in a BMW 330e. Sorry Mercedes.

For a start you just don’t get a particularly great sense of connection to the front wheels, a feeling not helped by the rather sudden ramp up in steering ratio courtesy of the variable rack fitted. A bit more weight build-up wouldn’t hurt, either.

There’s more body roll and a greater tendency to wash wide at the front, all of which conspire to make the C300e feel significantly less agile than its arch-nemesis. 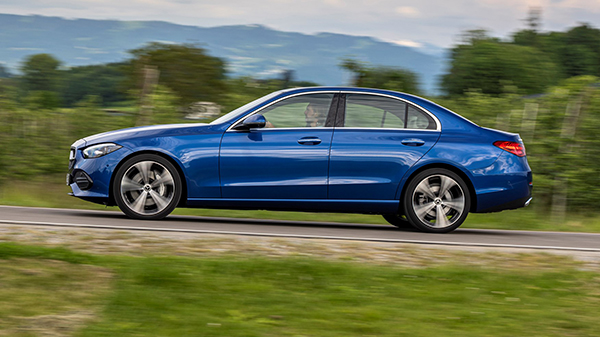 Should I care?
Probably not if we’re honest. As good a sports saloon as the 330e is, it isn’t quite as agile as one of the non-PHEV models and you always feel a little guilty watching your hard-earned economy figures getting flushed down the toilet as you start flexing your right ankle.

With a belly full of volts, a long journey ahead of you and the constant worry of finding a petrol station with fuel to offer, you’d almost certainly take the Merc. Even on optional adaptive dampers the 330e fidgets a little on the motorway and generally has a much firmer edge to proceedings.

Anything else to worry about?
Now, the C300e isn’t perfect, sending a bit of a jolt up to your backside when you hit something sharp-edged and taking a moment or two longer to regain its composure over challenging roads, but 95% of the time it’s the comfier companion. As for that electric-only range, we set off with 53 miles in the battery, covered 33 miles in mixed conditions on amps alone and still had 19 miles remaining.

With only three miles covered on petrol power, we averaged 188.3mpg without even trying particularly hard. Helping matters is an electric motor with enough power and torque for sufficient acceleration in most situations, handy as the petrol engine is rather boomy when worked hard. It’s a shame as the transition from electric to petrol is for the most part smooth (although the 330e is smoother still).

While we’re complaining, we found the brakes tricky to modulate accurately especially with the C300e set to its automatic regeneration mode. Turning this off makes them easier to predict, thankfully. 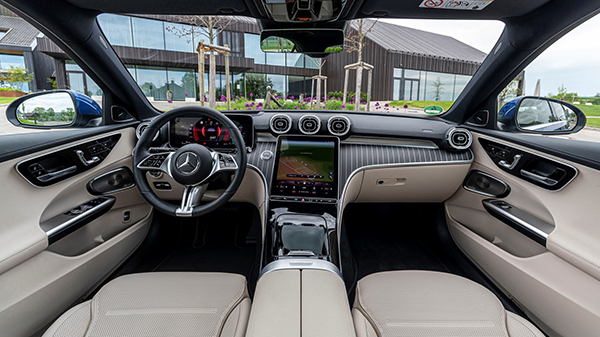 What about the interior?
Apart from a few hybrid-specific displays that allow you to see where the power is flowing, remaining electric range and to change the mode you’re in, the interior is as you’d expect for the new C-Class.

That means a big digital driver’s display in place of analogue instruments and the availability of a giant head-up display that proved exceedingly clear and helpful on our test car. The infotainment screen is now a Tesla-style portrait-oriented touchscreen that’s responsive and easy to navigate, while interior quality is improved when compared to the old C-Class.

However, the BMW 330e we brought along had and even better constructed interior, and although the spread of buttons and knobs may look a bit old hat these days, they’re easier to use on the move.

The 330e has an extra 60 litres (about a carry-on suitcase) of boot space over the C300e’s 315 litre boot although both are a usefully square shape with a low loading lip if you’re interested in such boring things. If you want to know a bit more about space for people, we’d point you towards our main C-Class review. 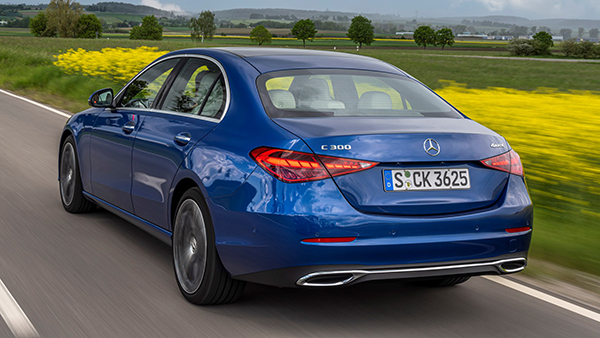 Mercedes C300e: verdict
As I drove away from Mercedes HQ, it became even more obvious that the C300e and 330e are two cars with very different characters. If you value sharp handling and don’t mind paying the taxman a bit more for it in company car tax and fuel bills, the 330e is still a fine choice.

However, if you’re after a plug-in hybrid to save the planet or a few pounds, it’s hard to ignore the C300e’s numerous charms. In its natural environment of the motorway it’s a more accomplished cruiser even without fancy adaptive dampers, and the real world electric range is astonishingly good.

Given the easy-to-use touchscreen infotainment system and adequate if not ample space inside, we suspect the C300e will be the best choice for all but the keenest of drivers.