For America, muscle cars like the Camaro and Mustang are staples of the automotive economy – cars the masses can aspire to for their performance thrills. For German automakers, the equivalent is to be found in the likes of the BMW M3 and the Mercedes-AMG C63. But the latter has entered a new era as of yesterday and elevated the German Power Wars to a new level. How has it done this when it’s been widely publicized that Mercedes-AMG has dropped the thunderous V8 and put in its place a 2.0-liter turbocharged four-cylinder? Electricity. That’s right, the new C63 is now a plug-in hybrid. 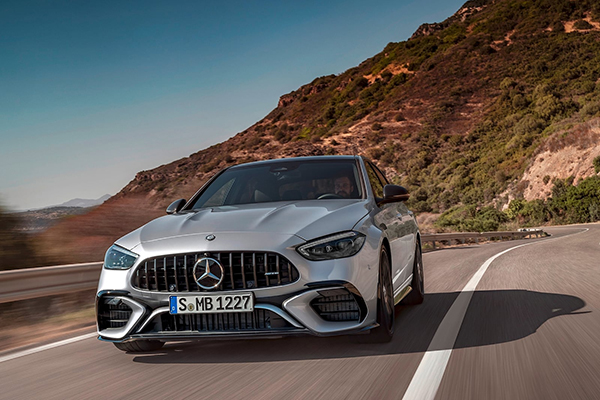 As the range-topping model of the C-Class family, the new AMG C63 Sedan is available in a single designation: C 63 S E Performance. Based on the W206-generation C-Class family, it uses the Mercedes-Benz MRA II platform in a highly-advanced state to accept Formula 1-derived electrification technology. A monument to German engineering prowess, the C63 S E Performance could either set new standards in a hotly contested segment or prove just how far we’ve fallen in our pursuit of efficiency. The stakes have never been higher.

2023 Mercedes-AMG C63 Price and Competition
The price of the 2023 Mercedes-AMG C63 Sedan remains a mystery even to those at Mercedes’ American HQ. That’s because it’s still some way away, and the final US specs are still to be determined. When the old C63 departed our shores at the end of 2021, it was priced from $76,200 in S form. Expect the new one to be a fair bit more than that, with MSRP estimates closer to $85,000, if not more.

Chief rivals include the BMW M3 Competition xDrive, priced from $80,800 for the 2023 model year, while the Audi RS5 Sportback starts at $76,200. Neither of these has anywhere near the same power as the new AMG model, however.

New Mercedes-AMG C63 Sedan Exterior and Colors
Unlike the BMW M3, Mercedes-AMG applied far more restraint when it came time for the new Mercedes-AMG C63’s exterior design to be finalized. There are signature elements like the Panamericana grille, widened fenders, and quad tailpipe finishers in a trapezoidal shape, but there are also some new elements. The front and rear bumpers are sculpted aggressively, and there are vents atop the front fenders. At the rear, a subtle ducktail-style trunk lid spoiler features. The newest elements are at the front of the vehicle, however, where between the two power domes on the hood, a horizontal vent has been added for heat extraction, while the AMG crest in black has been added in place of the Mercedes star on the hood. The badges are new for this model with red backing, and the fender badges now read both “Turbo” and “E Performance.”

The standard wheels measure 19 inches, but optional items are up to 20 inches in diameter.

Exterior colors of the Mercedes-AMG C63 have not been confirmed, but the sedan debuted in a shade of Hightech Silver, while a European wagon variant wore a darker Graphite Grey Magno. Both are expected to be joined by various greys and perhaps a few more exciting blues and reds, but the palette will likely be subdued.

Mercedes-AMG C63 Dimensions
This may still, technically, be a C-Class, but the dimensions of the AMG C63 have been altered in accordance with its performance. The wheelbase is 0.4 inches longer than standard at 113.2 inches, and the length of the sedan has grown a full 3.3 inches, totaling 190.3 inches. The car is wider, too, with the front end boasting an extra three inches of girth at 83 inches overall. But there’s an elephant in the room – and it’s a heavy one. That’s because the plug-in hybrid and all-wheel drive systems of the C63 result in a curb weight of 4,654 lbs. By way of comparison, the M3 Competition xDrive weighs just 3,890 lbs. 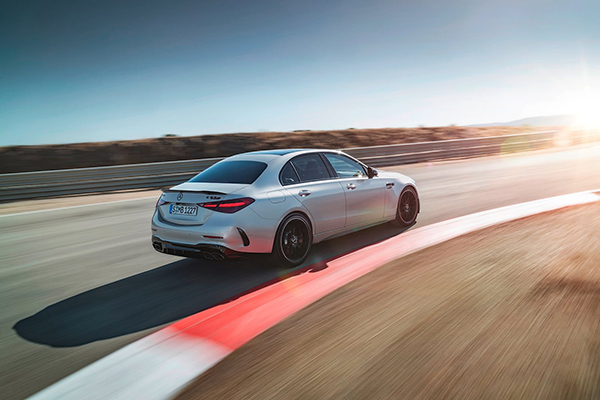 Mercedes-AMG C63 Sedan Engine and Performance
With so much extra weight onboard, one hopes that AMG has at least compensated where it matters. A glance at the spec sheet showing a 2.0-liter turbocharged four-cylinder engine under the hood of the Mercedes-AMG C63 might then seem disappointing, until you learn the turbo is electrically assisted to mitigate lag, and the four-cylinder is the most powerful of its ilk in a series production car, generating 469 horsepower at 6,750 rpm and 402 lb-ft of torque at 5,000-5,500 rpm. It sends power to an AWD system via a nine-speed automatic gearbox, and at the rear, it’s augmented by an electric motor with its own two-speed transmission, adding another 201 hp to the mix at full tilt. Combined outputs are rated at 671 hp and 752 lb-ft, giving the C63 more torque than an SL65 AMG Black Series.

To aid handling, there’s a limited-slip differential, but there’s also rear-wheel steering with up to 2.5 degrees of articulation. Steel springs and adaptive dampers maintain a firm connection with the road, with Comfort, Sport, and Sport+ modes for the car’s damping. Six-piston front and single-piston rear brake calipers aid stopping, while the regenerative brakes have four available levels of efficacy.

Eight AMG drive modes are present ranging from Electric – with speeds of up to 81 mph on electric power alone – to Comfort, Battery Hold, Sport, Sport+, Slippery, and Individual. Finally, Race mode enables access to 100% of the power and torque at any given moment, while a ‘Boost Mode’ button on the steering wheel gives you push-to-pass capability for a brief period.

Sounds good, right? Well, the concept does, but we’re not so sure of the engine. AMG uses external speakers and a pressure sensor in the exhaust to augment the sound you hear, while an enhanced version is played inside the cabin through the speakers. 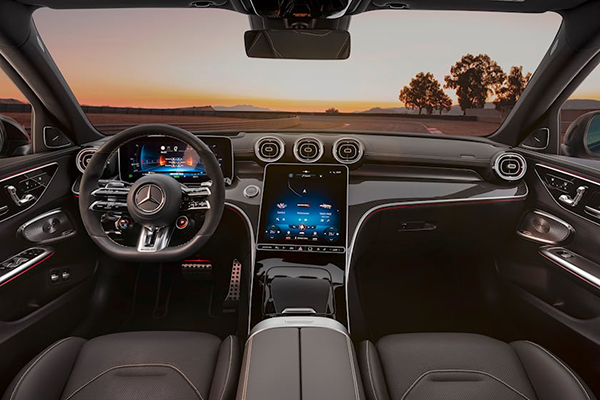 Gas Mileage/Range, Charging, Battery Life
Gas mileage figures have not been confirmed for the USA yet, but we do know that the C63 has a 6.1 kWh lithium-ion battery positioned over the rear axle, with development inherited from the same systems found in the brand’s F1 cars. On the WLTP cycle, a claimed electric range of eight miles is possible.

The system can be plugged in to recharge with an onboard 3.7-kW AC charger. Mercedes-AMG says range was not the focus here, but rather rapid power deployment for the sake of performance, which is why it has 400-volt performance and liquid cooling.

Mercedes-AMG C63 Sedan Interior and Cargo
With seats for five occupants in the Mercedes-AMG C63’s interior, it’s a family affair. But only the front occupants get access to a new generation of AMG Performance front buckets as an option, with impressive bolstering and a unique new design, replete with AMG crest embossing on the seatbacks. These have been showcased in black with yellow leather inserts and yellow contrast stitching throughout the cabin, but expect several hues when the production-spec car arrives.

Inheriting its interior design from the regular C-Class, an 11.9-inch touchscreen sits in a portrait orientation, running the latest MBUX infotainment software. Ahead of the driver, a 12.3-inch digital instrument cluster has a variety of modes and displays unique to the nature of the plug-in hybrid AMG model, while a head-up display presents information neatly in the driver’s line of sight.

The AMG steering wheel has AMG Drive Unit rotary controls to let you tailor the driving experience, and available leather and Alcantara cladding add a tactile touch to the interior.

We don’t quite know how much trunk space the Mercedes-AMG C63 has, as Mercedes hasn’t yet published these figures. In theory, it should be the same as the regular C-Class at 12.6 cubic feet, but the battery and electric motor over the rear axle may impact the available cargo space.