The future must be a scary, scary place, given some of the comments hurled at the 2023 Mercedes-AMG C63 S E Performance. The new C63’s turbocharged 2.0-liter inline-four replaces its old twin-turbo 4.0-liter V8, and skeptics haven’t held back their disdain for the downsizing, despite the car’s massive 671 horsepower and 752 pound-feet of torque courtesy of a plug-in hybrid system. 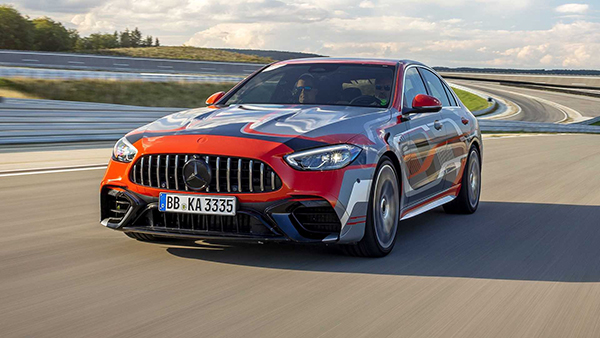 But for many naysayers, there is no replacement for displacement, even though smaller engines and electrification are a seeming inevitability. They say, “Whither the V8’s low-end burble or snarling redline,” and no amount of power can convince them otherwise. Well, after a brief ride in the 2023 C63 through Mercedes-Benz’s impressive test facility in Immendingen, Germany, I’m going to fall back on that old chestnut used to silence critics since time immemorial: Haters gonna hate.

That childish phrase aside, the new C63 is still just as good at putting a smile on your face as its V8-powered predecessor – at least from the passenger seat. The formula is different, as is the methodology used to achieve that goal, but even so, the turbocharged, hybridized four-pot still makes for a rowdy good time. 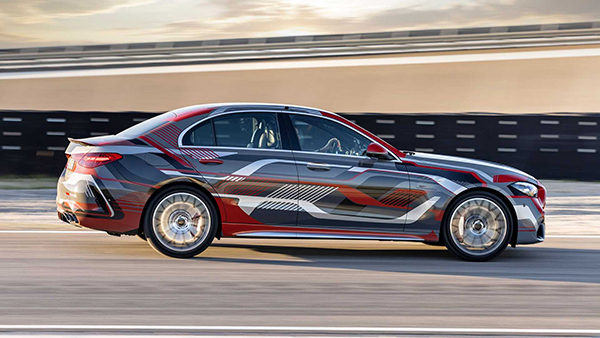 Zero-Emissions Fun
To briefly introduce me to the C63 S E Performance, Mercedes-AMG Chief Technical Officer Jochen Hermann drove me along the Immendingen Test Center’s access roads under completely silent EV power. The single electric motor on the rear axle puts out 204 hp on its own, and it feels like it has enough grunt to keep up with urban traffic. A quick pull to 20 miles per hour (what you’d muster when making a right turn) is quicker than I expected given the C63’s portly, 4,600-pound estimated curb weight. But the EV mode isn’t really about performance, and with a Mercedes-estimated electric range of 7.5 miles, it’s not an efficiency play, either.

As Hermann explained, driving on pure electrons is more for those rare moments when you (or your neighbors) need some peace and quiet. And at least around the deliberately varied, sometimes-broken pavement at the test facility, the C63 is as pleasant and smooth to ride in as one would expect of anything wearing a three-pointed star. Some thanks go to the silent electric power coming from the rear, but the adaptive suspension and progressive steel springs play a part, isolating the cabin from some vertical motions to provide a smoother ride.

Once Hermann grew weary of the 18-mph speed limits on Immendingen’s “city route,” he pointed us toward a simulated mountain road with two plunging hairpin switchbacks connected by three long, sinewy sweepers. Still in EV mode but with the suspension firmed up via its own dedicated control knob, he let the C63 rip. The instant torque characteristic of most hybrids and EVs gave the AMG plenty of acceleration from corners, although I suspect the car would have run out of steam toward the end of the sweepers if they were much longer.

Hermann chucked the C63 into the corners while still carrying some startling momentum, and the car simply dug in and bit hard. Body roll is minimal, although the even keel does come at the expense of some ride comfort with the dampers firmed up. Adding to the G-forces is a standard rear-axle steering system that can turn the back wheels up to 2.5 degrees out-of-phase for a tighter turning radius, snappier turn-in, and reduced understeer. Hermann says the decision to add rear steer was in part due to the weight gain – a compensatory measure that paradoxically adds weight in and of itself. 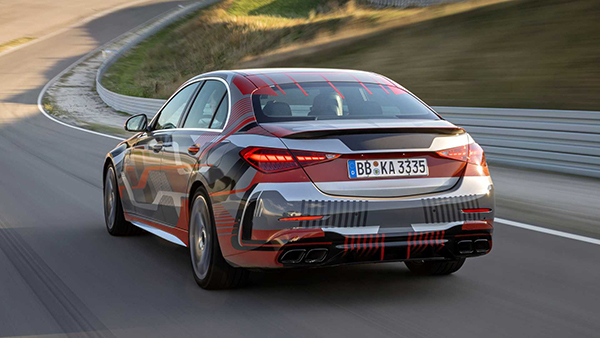 Two-Face
Still, the C63 changes direction readily, as I was about to learn when Hermann piloted us toward the test facility’s 2.9-mile handling circuit, where we would fire up the gasoline engine for the first time. My driver suggested I take note of the battery’s state of charge after our EV sojourn: 34 percent.

“This is a pre-production car,” he said, “so we’re going to take it easy.” I shouldn’t have relaxed though, because the Mercedes-AMG CTO knows a thing or two about driving – his “take it easy” is about three-tenths more aggressive than my “maximum attack.” Following a couple corners behind a camouflaged coupe that looked a lot like a hardtop version of the SL, Hermann threw the 2023 C63 down the track’s plunging, banked Turn 1. Descending about 30 feet through the curve, the little AMG exploded from the exit with terrifying alacrity, accompanied by the chopsaw shriek of the 2.0-liter inline-four. 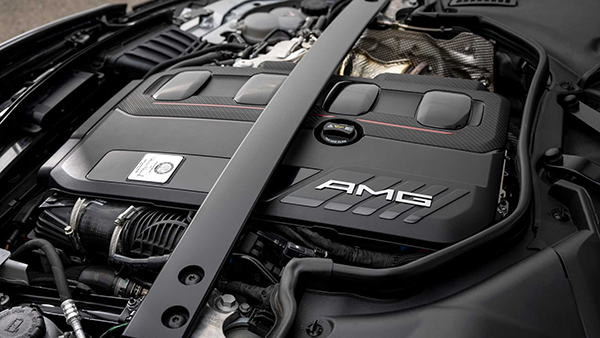 With the powertrain, suspension, and exhaust in Race mode, the car snarled its way around the track, clipping every apex before drifting wide on exit. Even over the curb stripes, body control was commendable, and it was clear that Hermann was having a good time driving his baby around the course – a cruel tease for me in the passenger seat. After a lap or two, he reminded me to check the battery gauge, where I was surprised to read a number in the 60s – in its sportiest setting, the car demands maximum brake regeneration in order to ensure there’s always a reserve of electric boost whenever the driver needs it.

Helping achieve that lofty goal is a smallish 6.1-kilowatt-hour battery that can charge or discharge at a rate of 150 kilowatts. With the car set to Race, it maximizes every opportunity to recharge the battery, which means that even after three hot laps, there was still enough juice to drive back to our starting point on electric power. To ensure reliability without sacrificing performance, the battery of the Mercedes-AMG C63 S E Performance features active temperature control that cools each individual battery cell to keep it in the optimal range – even in high-stress situations.

Once off the track, Hermann kept the car in Sport Plus mode to allow me to experience the car’s new soundtrack. In a mea culpa of sorts, the executive admitted that it didn’t sound anything like the old C63’s V8, but after he opened up the taps on that aforementioned mountain road circuit, I’m here to tell you, it doesn’t need to. 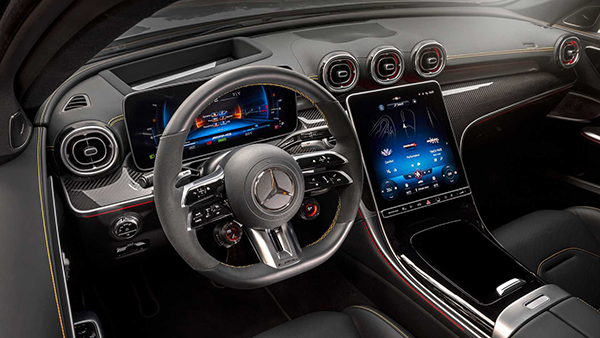 Although the hybridized, turbocharged C63 doesn’t have the bellow of its 4.0-liter V8 predecessor, there’s no denying the thrill of its newfound shriek. Those who’ve driven the hornet’s-nest-on-wheels CLA 45 will understand that Mercedes-AMG’s M139 four-cylinder engine has just as much aural enjoyment to offer as the V8 it replaces. They make different sounds to be sure, but neither is better nor worse.

Adding to the enjoyment (theoretically, since I only experienced it as a copilot) is its no-lag turbocharger setup. Like the similar system found in the non-hybrid Mercedes-AMG C43, the C63 has an electrically driven turbocharger, wherein a tiny electric motor mounted on the compressor wheel provides boost before the exhaust-gas impeller spools up. In fact, the 2.0-liter inline-four in the C63 makes 476 hp all on its own, more than the outgoing C63’s 471 hp (although admittedly, the old C63 S produced an even 500).

Appreciate, Don’t Hate
It’s easy to see the best attributes of a car when it’s flinging you from side to side in your well-bolstered sport seat, addling your brain with G-forces and concussing it with a snap-crackle-pop turbocharged exhaust note. Once back at the paddock and poring over the 2023 C63’s spec chart, I couldn’t help but feel sad that the legendary, handbuilt AMG 4.0-liter V8 is indeed going away, no matter how good its downsized and electrified replacement is.

While I empathize with those who’ll miss the banshee scream of that engine, I still can’t help but be impressed by the power and performance that AMG engineers were able to eke out of the plug-in hybrid 2023 Mercedes-AMG C63 S E Performance. The inevitable, electrified weight gain is a concern, but not one I was thinking about when I was getting chucked against the transmission tunnel or pushed back into my seat on that sweeping handling circuit. I’ll be curious to see how the new car compares to its predecessor in apples-to-apples lap times, but as always, the C63 is still a brilliant way to put a smile on your face and a thrill in your gut.