New Mercedes-AMG GT. The other day, fresh spy photos of a new German coupe with only partial camouflage were published on the Web, masking the front and rear of the body. We decided to imagine what the upcoming sports car will look like.

Any self-respecting automotive enthusiast has probably heard about the Mercedes Silver Arrows. Plus, anyone even remotely interested in motorsport knows about the German carmaker’s recently interrupted Formula One dominance. Oh, and they also used to supply the F1 safety car – now they just share the responsibility with their partners at Aston Martin.

And further going down that line of thought we also find the model that takes such cool duties utterly seriously, in a very German way – the Mercedes-AMG GT Black Series. But what is that? Well, starting in 2014, Mercedes-AMG produced the GT grand tourer in coupe and roadster form as a proper successor to the Mercedes-Benz SLS AMG. And, over the years, this new series has grown into an expansive lifestyle.

At first, there were only the closed and open-top GTs. But then there were also S, C, R, and R Pro variants – plus the Dark Night, Black Series, Track Series, and even a GT3 Edition 55 limited series. Just so that Mercedes-AMG fans do not get bored – and that is without even counting the GT 4-Door inside this family equation. Still, some might think that Mercedes-AMG’s GT has overstayed its welcome.

Especially now that its roadster version already has a direct successor, the R232 Mercedes-AMG SL-Class. Luckily, no one can accuse Mercedes-AMG of slacking around – at least not when the second-generation 2024 GT was recently spied on by our spy photographer partners while resting in the snow with only partial camouflage on its sleek two-door coupe body. 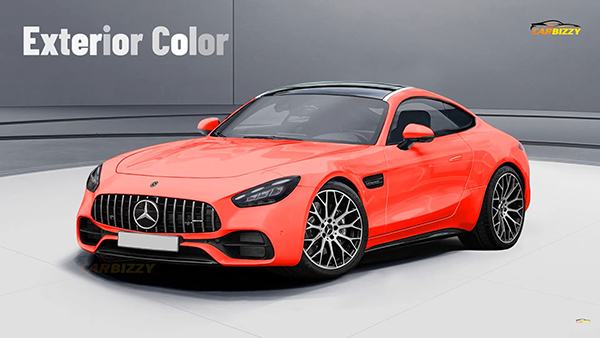 Allegedly sharing the same new architecture as the SL-Class roadster, the next iteration of the Mercedes-AMG GT will surely become a darling of collectors, sports car enthusiasts, and corner-carving lovers. But before that, we still need to check out the next iteration’s design, right? Well, if the official presentation is still some time away, no worries – because the imaginative realm of virtual automotive artists has everyone covered, as always.

Thus, meet the virtual automotive artist better known as Carbizzy on his YouTube channel, who has imagined the unofficial looks of the upcoming Mercedes-AMG GT grand tourer. Traditionally, the embedded unofficial presentation video kicks off with a dark atmosphere, continues with trendy head- and taillight ‘wink-wink,’ and only afterward reveals all the front and rear three-quarter POV goodies.

Even better, the imagined 2024 Mercedes-AMG GT sports or supercar (depending on its configuration) is also showcased in a variety of unofficial colors, and most of them are bright and sunny like it’s summer already. By the way, in case just two doors do not cut it for your Mercedes needs, the second video embedded below presents the hypothetical looks of the upcoming next CLA iteration.