As of now, the Mercedes-AMG GT is officially dead. AMG head Phillip Schiemer said so during a roundtable interview with Road & Track and others. “Production has stopped, so it’s no longer available,” Schiemer stated. Unfortunately, sales figures haven’t been handed down by Mercedes yet. 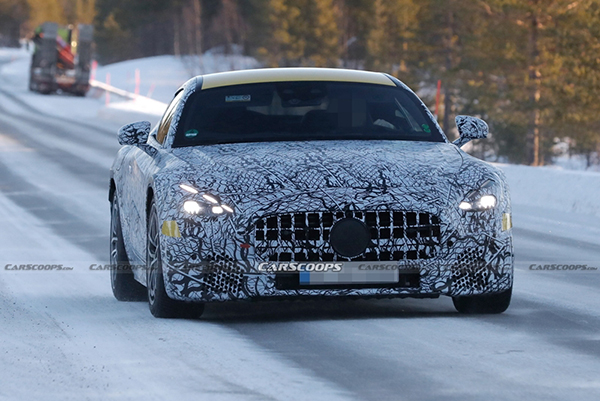 While the sports car is now officially consigned to the history books, Mercedes isn’t bothered. It already has a replacement for the AMG GT on the way and one that we’ve spied several times before. What that’ll look like is a much bigger question that Schiemer wasn’t necessarily willing to answer.

“I think the GT was a success, and I think it’s very easy to see that we will make a successor out of it,” Schiemer revealed. Again, it’s hard to know how much of a success the GT was right now, as Mercedes won’t share total production numbers.

A little digging around shows that roughly 17,000 or so cars were made since the model was introduced back in 2014. For a low-volume, highly niche sports car with a six-figure price tag, that’s not terrible on the whole. Regrettably, Schiemer didn’t have anything more to say about the AMG GT, as the purpose of the call was actually the new AMG C63 S E Performance.

Still, our spies have some reports of their own on the future of the AMG model. Some sources suggest that the current 4.0-liter V8 will live on. In fact, Mercedes itself has lent some credibility to this one, having said that V8s could live on past 2030 as long as consumer demand exists. Given the popularity of some AMG models, we wouldn’t be surprised.

Of course, the very C63 that Shciemer was on the call to discuss brings another theory. While we doubt the V8 AMG GT is gone altogether, it’s possible a high-powered hybrid four-pot is now in the cards given the power AMG was able to extract from the new C63.

For now, we’re sticking to the V8 theory, if only because we’d rather that be what lives under the next GT’s long hood. It should be the same unit found in the 2023 SL, which the new car will share a platform with. Should power outputs for the new car fall close to the SL, we’re looking at between 469 and 577 horsepower from the gas-only versions. An E-Performance hybrid model could bring around 843 hp to the table.

For now, it seems that Mercedes is more than content with how the AMG GT has performed in years past. What’ll power its successor may remain a question mark for some time, but at least the car will live on.