In an automotive world dominated by SUVs, it’s refreshing to see the coupe is still alive. Mercedes insists there’s a place in this world for its Porsche 911 rival, one that will more or less be an SL with a fixed metal roof. The two models have been developed together by AMG and while the convertible with a fabric top is out and about, the coupe has yet to be revealed. Ahead of its official debut, an interesting prototype has been spotted.

Hiding the SL’s Hyper Blue Metallic paint under the swirly black and white camouflage, the 2023 AMG GT Coupe appears to have the full production body. Our spy photographers have told us the test vehicle represents an Edition 1 model, which are typically sold during the first 12 months of production. The dead giveaway is at the rear where a fixed wing is part of an aerodynamic package that also includes a prominent front spoiler lip.

We’re likely dealing with the coupe equivalent of the SL 63, meaning there’s a twin-turbo 4.0-liter V8 engine under the hood. It makes 577 horsepower and 590 pound-feet (800 Newton-meters) of torque in the convertible, enabling the Sport Leicht to reach 60 mph in three and a half seconds. The AMG GT Coupe should be a tad lighter and therefore quicker than the cabio while having sharper steering and a stiffer suspension setup.

The gold brake calipers hint at carbon ceramic brake calipers for the Edition 1, which rides on 20-inch wheels with the recently launched Michelin Pilot Sport 5 tires measuring 295/30 ZR1 front and 305/30 ZR21 rear. Much like the SL, the new performance coupe is expected to have rear-wheel steering, fully variable all-wheel drive, and a nine-speed automatic transmission. 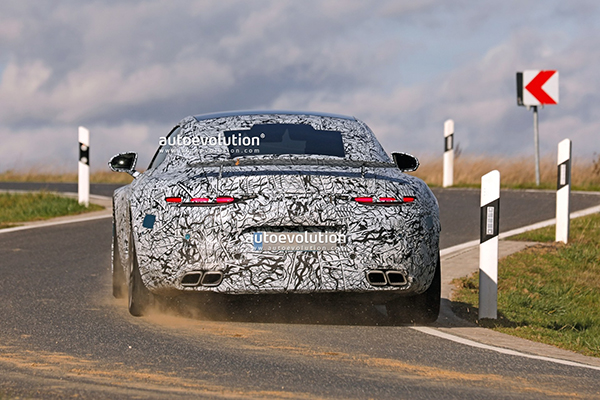 It will be interesting to see whether coupe-ified SL will also get a four-cylinder gasoline engine as part of a plug-in hybrid system to echo the SL 43. It would serve as the entry-level model while at the other end of the spectrum, more than 800 horsepower are expected from an electrified V8 setup borrowed from a car with an unusually long moniker – the Mercedes-AMG GT 63 S E Performance 4-Door Coupe.

Look for an official debut to take place in the coming months considering this prototype seems just about ready to lose the disguise.