Just like some automakers are trying to stand out in any crowd, automotive visual artists have also strived to deliver a signature style. Some look to please the personalization folk, others want to play with the latest releases. And there’s also the extreme stance. 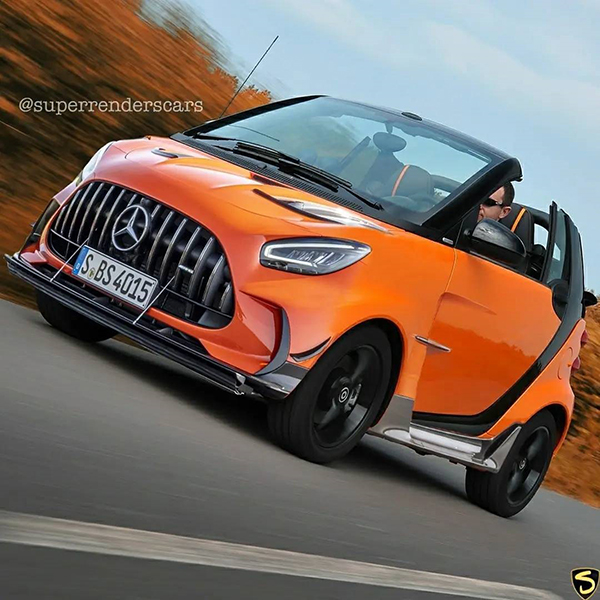 Many pixel masters give out their real names on social media. Others seek to conceal their identities across imagination land. Perhaps it’s for the better, especially when one’s usual work is susceptible to polemics. And here’s a very good example, coming from the person behind the superrenderscars account.

It’s not the first time we see a potentially vexing creation, although we could humorously argue that it’s only a little one on this occasion. Both figuratively and literally. This is because we are dealing with a CGI mashup between the puny smart fortwo and the mighty Mercedes-AMG GT Black Series. Sure, they’re both produced by the same company, but all family relationships need to end there.

Yes, we know that Brabus has reworked the smart fortwo to give it an added dose of personality. But has that helped with the sales of the little urban car much? That’s a question for the experts because this virtual creation instead plays with DNA traits taken from the in-house high-performance division. And the unnamed mashup (fans were asked to deliver the moniker) clearly went for the head (Avengers-Thanos-Thor pun totally intended).

So, here’s an orange-dressed smart fortwo with a huge AMG grille, Black Series-influenced headlights, an unnecessarily ventilated front hood (smart fortwos are rear-engined, remember?), and lots of extreme aero bits and pieces. Of course, one thing probably didn’t make the cut – that would be the 720-hp flat-plane crankshaft M178 LS2 engine.

If you ask us, it looks as if the GT went through a crusher. Although, can anyone imagine how it would feel to splash around in a smart fortwo equipped with the same mill that makes the GT Black Series run amuck to 202 mph (325 kph) after first passing the 62 mph (100 kph) threshold in just 3.2 seconds?