Ever wondered what goes on at the Top Gear test track when the show’s not being filmed? Well it’s this. Constant, non-stop THIS. Yep, Stig’s got his hands on the latest 720bhp Merc-AMG Black Series and wants to bonfire some tyres.

The Top Gear track is famous for determining which car is the quickest in a controlled environment. Hundreds of cars have been put through the course, but what happens when the timing clock flips off and the camera crew headed home? Well, a new video posted to the Top Gear YouTube channel shows us just that – and it looks as fun as you’d think it’d be. The video shows the Stig taking the 2021 Mercedes-AMG GT Black Series around the course – and there’s plenty of smoke.

The video captures the orange coupe sliding around the track with smoke billowing from the rear tires. The AMG GT Black Series is the most powerful road-going Mercedes ever built – until the Mercedes-AMG One arrives – packing a twin-turbocharged 4.0-liter flat-plane-crank V8 engine. The mill pumps 720 horsepower (537 kilowatts) to the rear wheels through a reinforced seven-speed DCT gearbox.. The power plant produces 590 pound-feet (800 Newton-meters) of torque, too. 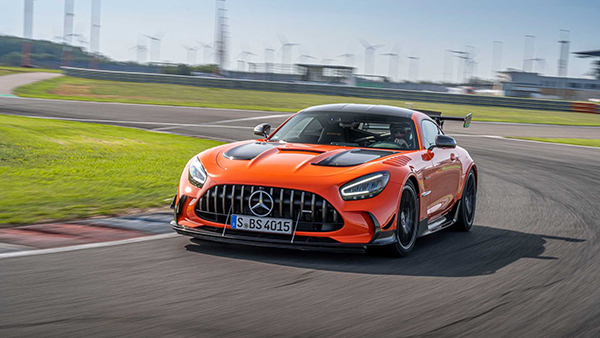 The video is quite short, serving more as beautiful b-roll than anything else, the Mercedes getting sideways at every opportunity. Mercedes claims the car can hit 60 miles per hour (96 kilometers per hour) in 3.1 seconds and 124 mph (200 kph) in less than inside seconds. The top speed is limited to 202 mph (325 kph), though the Stig doesn’t get anywhere close to that on the short Top Gear test track.

However, having that much fun doesn’t come cheap. The AMG GT Black Series commands a steep price – $326,050. That’s about double the cost of the quite potent AMG GT R, though Mercedes did a lot to improve the supercar so it could affix the Black Series badge. The company installed carbon-fiber body panels, lighter glass, an integrated roll cage, and much more. It helped the GT set the street-legal production car lap at the Nurburgring, too.