Halloween is the perfect time to not just listen to your inner voice, but to make it ROOAR! And that’s what our little puppy is doing. With a little help from his dad – and, of course, the Mercedes-AMG GT Black Series.

THE HALLOWEEN ROOAR By Mercedes-AMG

Derived from the M178 dry-sump V8 found in lesser GT models, the LS2 is flexing numerous modifications. The most dramatic improvement over the M178 is the flat-plane crankshaft, which sounds very unique due to the characteristic firing order (1-8-2-7 4-5-3-6 as opposed to 1-5-4-8 6-3-7-2 for the M178). With less rotational mass than a cross-plane crankshaft, the LS2 in the GT Black Series also happens to rev 200 rpm higher than a GT R. 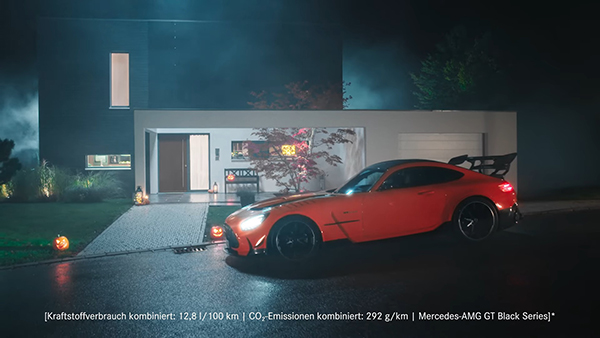 Tipping the scales at 1,540 kilograms (3,395 pounds), which makes it lighter than the track-focused GT R Pro, the GT Black Series isn’t for the faint of heart or for Average Joes because it has lapped the Nurburgring in 6:43 and because it costs a ridiculous $326,050 sans optional extras.

“The performance, looks, and driving dynamics of the GT Black Series are second to none,” says Tobias Moers, former big kahuna at Mercedes-AMG and current head honcho at Aston Martin Lagonda. “This project was a fantastic closure to my work at AMG, for which I am truly thankful.”

Not long now, the GT will be redesigned from the ground up on the AMG-developed platform of the new SL for the 2022 model year. The R232 is offered only with AWD and the wet-sump M177 for the time being.