Nobody wants to make babies cry – not so much to protect the babies – they’re babies, that’s what they do, they cry; not a big deal – but out of fear of the mother’s wrath. After hours of soothing the little thing to sleep, she’ll probably be ready to strangle whoever it is that wakes it up before she can get her energy levels back up.

The Mercedes-AMG GT Black Series, particularly in black, is the perfect anti-baby all-in-one solution. Its engine and exhaust combination are guaranteed to interrupt their sleep and then, once they’re awake, its sharp lines and Darth Vader lookalike bodywork will do the rest to ensure the little ones’ eyes don’t remain dry for too long.

That’s basically us taking way too long and going on a slightly absurd tangent to say that the GT Black Series looks and sounds pretty mean. For an AMG car, the acoustics are probably not as loud as you would expect given the appearance and the performance, but they’re still juicy enough to help round off the experience nicely. 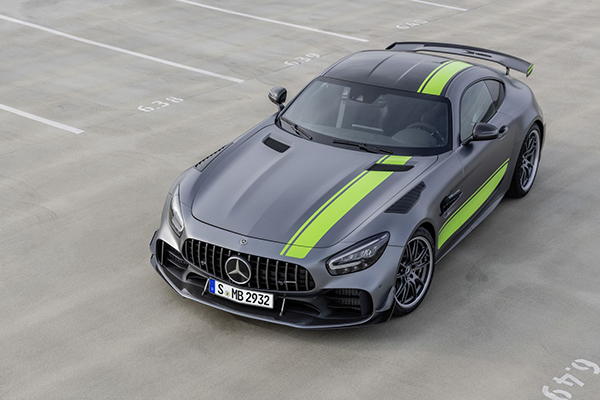 As for the performance, suffice to say the iteration of the 4.0-liter twin-turbo V8 engine in the GT Black Series is the most powerful stock version of any AMG V8 engine ever. With 730 hp and 590 lb-ft (800 Nm) of torque, the 62 mph mark (100 km/h) comes in just 3.2 seconds, while the top speed is rated at 202 mph (325 km/h). Since this is a track special, though, as given away by the large wing at the back, it actually comes alive in the bends. Don’t believe us? Well, the 6:43.62 Nordschleife lap time (a record for a production car until recently when the Manthey tuned Porsche 911 GT RS managed to beat it by just 0.32 seconds) should speak for itself.

Here is a question nobody ever asked but AutoTopNL was happy to answer just as we were happy to witness it: “how will the Mercedes-AMG GT Black Series handle the Autobahn at full throttle?” You can see for yourself in the video below, but you can tell from the title that, for reasons unknown to us, its official top speed was not met. Instead, they stopped at 196 mph (315 km/h), which is still way faster than most of us will ever experience outside of a jet plane.