Not so long ago, a man named Chris Harris claimed that the McLaren Senna could be as fast as a GT3 car around the Silverstone GP circuit – spoiler alert: it wasn’t, but it did come close. Thankfully, Sport Auto’s latest video features its test driver Christian Gebhardt taking the Mercedes-AMG GT Black Series for a hot lap around the Hockenheim race circuit.

Sure, the new AMG Mercedes blitzed road cars like the McLaren 720S and Ferrari Pista to the tune of around two seconds, but how does it fare against its GT3 race car compatriot? Thankfully, Hockenheim is one of the stops for the ADAC GT Masters racing series, and it just so happens that the AMG GT3 race car recently qualified in eighth-place, circling the track in 1 minute and 38.5 seconds.

Unsurprisingly, with a lap time of 1:43.3, the road car is a speculative five-seconds slower than the race car, but there’s more than meets the eye. While that may seem like eons of difference on track, the GT3 car was at the hand of Maro Engel, a Mercedes factory driver with victories at events like the 24 hours of Nürburgring and Macau GT Cup – with Maro in the road car, we’d wager the gap would be closer. 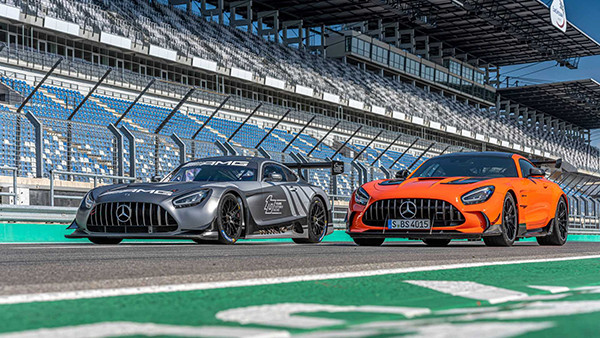 Bro science comparison aside, it’s clear that the AMG road challenger will melt any circuit in its path. As the new car utilizes a flat-plane crank compared to its predecessor’s cross-plane, the twin-turbocharged 4.0-liter V8 engine sounds more docile, but it’s hard to argue with its 720 horsepower (536 kilowatts) and 590 pound-feet (800 Newton-meters) output. Thanks to its clever Michelin Cup 2 R tires and aggro aerodynamic package, the new vehicle is sure to hug any corner like its favorite granny.

While it’s been rumored that the rapid Mercedes has been around the Nürburgring Nordschleife in 6 minutes and 40 seconds, the lap time hasn’t been officially released. The German automaker remains tight-lipped, but we’d be surprised not to see a new production lap record in this car’s future.