The new Mercedes-AMG GT Black Series has been officially revealed. When it goes on sale later this year, it will be the most extreme road going version of the car to date, drawing inspiration from the brand’s AMG GT GT3 race car and offering fresh competition for the Porsche 911 Turbo S.

It’s powered by a heavily modified version of the standard car’s twin-turbocharged 4.0-litre V8 engine, which has been fitted with a host of go-faster bits from Mercedes AMG GT GT3 racer. Upgrades include a set of reprofiled camshafts, fresh exhaust manifolds, larger turbos, bigger intercoolers and an aggressive new tune for the car’s ECU.

All this means that the engine now produces 720bhp and 800Nm of torque – which is 250bhp and 200Nm more than the entry-level AMG GT. Power goes to the rear wheels via a beefed-up version of the car’s seven-speed automatic gearbox, which AMG says gives this latest Black Series model a 0–62mph time of 3.2 seconds and a top speed of 202mph. 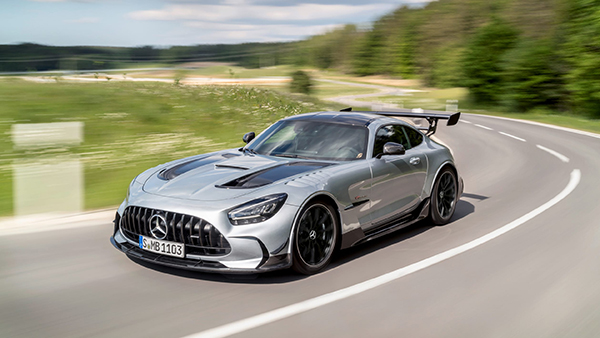 New Mercedes-AMG GT Black Series: chassis and brakes
Mercedes-AMG says the GT Black Series’s new engine is the most powerful V8 unit that has ever fitted to one of its cars – so, to keep all that performance in check, the firm has given the GT’s chassis a thorough overhaul with tougher, yet lighter, components.

The GT Black Series also has a wider track than the standard model and, wherever possible, Mercedes has swapped metal components in the car’s chassis for carbon fibre replacement. So, there’s lightened versions of the GT’s front and rear torsion bars, as well as a new carbon fibre shear panel at the rear of the vehicle.

Mercedes has improved the GT’s brakes, too, with a larger set of drilled and vented ceramic discs with six-piston calipers up front and four-piston calipers at the rear – both of which are finished in black. 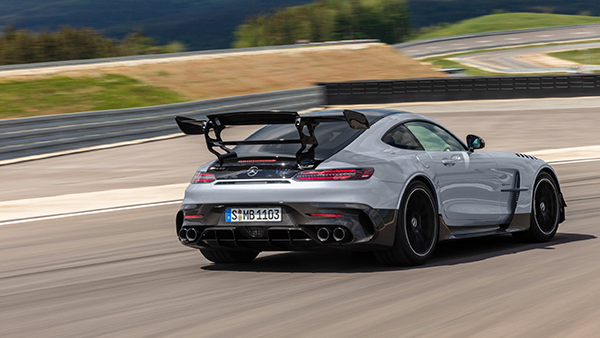 Styling and aero
The AMG GT’s aerodynamics have been given an equally extensive update, with a similar range of tweaks as the firm’s GT3 racecar. Up front, there’s a new braced front splitter and reprofiled front bumper, which works with the new vented bonnet to improve the car’s downforce and expel excess heat from the engine bay.

Further upgrades include new vents for the front and rear wheel arches, allowing turbulent air which would normally be trapped in the wheel arches to escape. At the rear, there’s an aggressive diffuser and an enormous, manually adjustable rear wing, which can be tweaked through 20 degrees, offering either increased downforce or a reduced drag.

There’s also a new, near-full-length undertray, which the firm says will channel air towards the rear diffuser. In total, Mercedes-AMG says its aero tweaks produce a maximum of 400kg of downforce.

Finally, to lower the GT Black Series’s kerb weight and improve its centre of gravity, Mercedes-AMG has fitted a new carbon fibre roof, a carbon fibre boot lid and thinner glazing. The car’s hub carriers are also made from aluminium and there’s a new carbon fibre torque tube connecting the engine and the rear-mounted transmission. 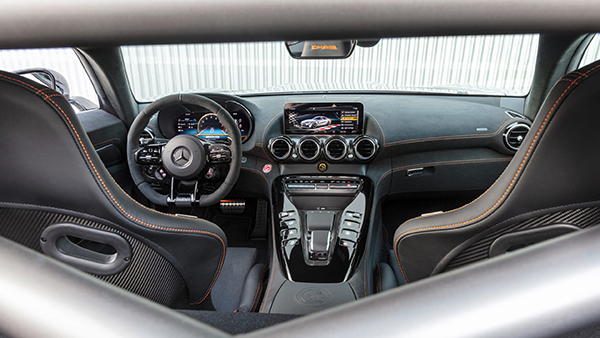 Buyers can also opt for Mercedes-AMG’s Track Package as an optional extra, which adds a pair of carbon-fibre backed bucket seats, four-point harnesses, a 2kg fire extinguisher and a titanium roll-cage with a diagonal X-brace.

As is traditional with Mercedes’s Black Series models, this highly-tuned AMG GT will likely mark the end of the coupe’s lifespan. We expect it will remain in production until 2022 before being replaced by an-all new model.